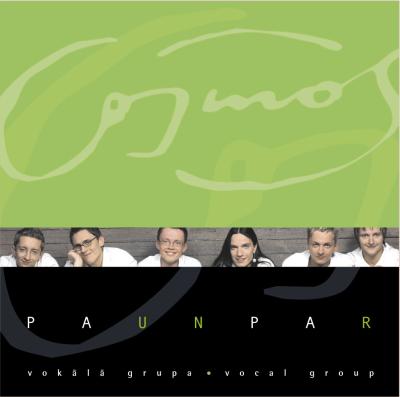 This just in: modern a cappella is alive and well in Latvia.

OK, maybe "alive and well" is an overstatement, but if Pa un par (On And About) from the six man group Cosmos is any indication, the future looks promising. These guys are damn good.

The album itself is a tad schizophrenic — featuring an odd assortment of songs in English, from as diverse sources as Crash Test Dummies, to the Beatles to Jamiroquai, jumbled up with what I believe are some Latvian "classics", as well as some originals penned by group members. Assessing the result requires a distinction between the overall sound/performance and the material/arrangements.

On a sound/performance level, these guys are top-notch, reminding me a lot of baSix and/or perhaps a hipper version of The Kings Singers (the similarity to KS goes beyond the six man, two countertenor makeup of both groups — Cosmos covers the KS version of Blackbird on this album). Not unexpectedly, there are some pesky pronunciation problems that creep into the English songs, but it's hard to fault them too significantly for that. On some tracks, the guys are miked a bit too tightly, making every breath annoyingly audible. But overall, their intonation is near-perfect, their blend, though noticeably "produced", is smooth and clean and they clearly have energy to spare. If it didn't mean going to Riga, I think I'd really enjoy seeing these guys put on a live show.

From a material/arrangements perspective, the album has its issues. The high points are unquestionably the two English tracks (Virtual Insanity and Got to Get You into My Life) arranged and produced by Britt Quentin — yup, you heard me — which gives the guys a chance to show off their harmonic and rhythmic abilities in the best light. The other English tracks fall a bit short either because they have been interpreted oddly or too simply — Mmm Mmm Mmm Mmm lacks any of the edge that seems to lurk under the surface of the original; Change The World seems to have been filtered through a Wham/Lionel Richie prism circa 1985; I Can't Dance has very little "arrangement" to it relying too heavily on VP studio trickery; and even the already simple Dear Friends from Queen falls a little flat in its too sincere delivery. You'll note that some of these tracks still earned "5"s — that's because my negative feelings are more about my personal feelings about the artistic choices made on these tracks. The undeniable fact is that most of them, taken on their own terms, are still first-rate renderings of the songs in question.

Really it's the Latvian material that is the true find here. Not "Pirms" (meaning Before (Intro)), "Saullekts" (Sunrise), and "Saulriets" (Sunset), all but the last of which are pleasant, if negligible. The first two feature what sounds like some throat-singing, though I can't be sure, which is interesting for a few seconds and tiresome for 3 minutes — feels like Vangelis meets Enya. But the title track has an infectious Stevie Wonder-esque funk groove that is most enjoyable, and the folksy vocal jazz feel of Mezs (also produced by Quentin) and seemingly poetic ballad Sena dziesma are also quite engaging. All the more bothersome, then, that the Latvian tracks don't include translations — aargh!

Do you need to run out and buy this album? Probably not. But keep your eyes — and ears — on these guys. I think we'll be hearing more from them. And I'm looking forward to it.

Cosmos is a six man professional group hailing from Latvia and seems to have the power of the people behind them. Having seen the frightening intensity that pop singing contests like American Idol and Super Voice Girl (in my respective home and adopted countries) elicit from the public, I find myself quaking in my boots. Far be it from me to offer judgment on the group nominated as "Best Young Artist of the Year", the winner of "Best Latvian Pop Album of 2003", and the winner of "New Wave 2004", a televised international singing contest. I got enough trouble without inciting the rage of an entire East European nation.

But RARB pays me the non-bucks to tell the truth and I gotta tell you, Pa un par is just not a good album. To be fair, it's also not an awful one. Cosmos sings here with reasonable credibility but not with a lot of consistency or stylistic coherence.

The vaguely primordial chords of the opener Pirms, later reprised in Saullekts, are an odd choice for a group that seems to otherwise specialize solely in Latvian and western pop songs. I betray my nerd origins with my enjoyment of these tracks, which really evoke the soundtrack of a planetarium show. But Cosmos shows skill beyond the Epcot Center genre — the eponymous track is bright and engaging, and the group treats Mezs and Sena dziesma with melancholy sensitivity and strong solo work.

Cosmos stumbles more when borrowing outside of the Latvian canon. An overly cheery, boppy version of Blackbird glosses over the wistfulness that marks the best renditions of this song. I Can't Dance and Virtual Insanity plod limply along, while the weak faux-Jacko shrieks and clipped phrasing of Billie Jean inspire cringes rather than dancing. Britt Quentin of m-pact fame lends an arranging and producing hand on a few of these tracks, but Cosmos fails to find the necessary groove and style even with his guidance. I did find their treatment of the odd hit single Mmm Mmm Mmm Mmm somewhat engaging though.

As for the few parlor tracks Cosmos employs here, most fall flat. The one minute Intermission track is literally a recording of an intermission and might be kind of fun on a live concert album. On a album of studio tracks, it just seems off-putting. Ditto for the hidden ending to Sunset, a bunch of whispers and sophomoric laughter that alternates channels.

The liner notes suggest Cosmos has conquered Latvia's hearts, but the larger a cappella world may take some more work.

The funny thing about music termed "easy listening" is that it's anything but easy to listen to. It's ersatz pop music — no small feat when you consider that pop music is kind of ersatz already. How, then, is Pa un par (On And About), an album that could very well slip comfortably into that understandably maligned cheese-fest of a genre, such a pleasure to listen to?

Maybe I'm just confusing "easy listening" with "easy to listen to". The thing is, Cosmos' latest album is a subtle, refined confection. It hosts fifteen tracks that groove along with ease, favoring a light touch and a consistently pleasant dynamic. In less capable hands, this approach might have led to a numbing safeness (easy listening as lobotomy) but right underneath the clean surface of Cosmos' sound float layers of sophistication and complexity. Coupled with a relaxed, confident performance, it makes for an intriguing, irresistable whole.

Pa un par (On And About) eases into existence by way of a nifty, Eastern-influenced drone-and-chant original that transitions into the simple, sparsely arranged covers of Blackbird and Mmm Mmm Mmm Mmm. These two tracks, pared down to their most fundamental elements, may not kick things off with a bang, but they effectively set the tone of the album. These songs, and those that follow, are treated with a thoughtfulness that highlights the vocal capabilities of Cosmos, as opposed to squeezing voices into cookie-cutter replications of the originals. Change The World — a song with which I am mostly familiar thanks to whatever radio station they play over my local Walgreen's sound system — becomes almost anthemic in Cosmos' hands, building into a third verse that floats into the stratosphere with gleeful abandon. The title track is a quirky, apreggiated romp, followed by two lovely, and at times ethereal, ballads. The first half of the album ends with Sunrise, an elaboration and extension of Before (Intro), and features some wonderfully innovative breath percussion.

If this album falters, it is in the second half, which covers the most mainstream material. Neither Virtual Insanity nor Billie Jean, the album's edgiest fare, are fully supported by Cosmos' laid back style. To be sure, these are still good tracks, but the former lacks some much needed sass, and the latter is just too slick-sounding. On the other hand, I Can't Dance has a great industrial groove, and Got to Get You into My Life positively pops. Sunset is almost too lush for words. I'm not sure what the point of Intermission is — ambient audience noise doesn't really do much to stimulate the senses, and anyway it's not a cappella, or even music — so that explains the otherwise incongruous low mark. And the hidden track, while surely passable musically, like most hidden tracks adds nothing to the album as a whole.

One thing I'd love to see more of from Cosmos in the future is the inclusion of more Latvian music. They've done a most credible job covering pop songs from the US and the UK, and based on the three Latvian tracks on Pa un par (On And About), their homeland certainly has music that caters to the group's aesthetic. And I hope the group continues to make forays out of their comfort zone — the second half of this album is definitely a step in the right direction. But for now, Cosmos has given us a lovely album, suitable for our listening pleasure, easy, or otherwise.

To order the album, visit A-Cappella.com or UPE Records Company; or contact the group directly.