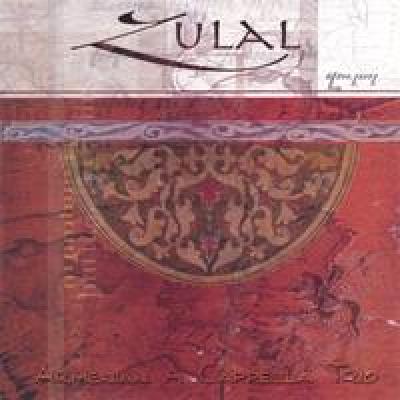 So went my initial reaction to listening to Zulal's self-titled album. The album is pleasantly arranged, pleasantly sung and pleasantly moving.

That's how I still feel, though I'm still not satisfied.

Teni Apelian, Yeraz Markarian and Anaïs Tekeria are three talented friends who, according to their website, got together and formed an a cappella folk trio "whose original arrangements pay tribute to Armenia's folk roots while forging imaginative harmonies that add a fresh energy to traditional repertoire". Their passion for the music is evident in their singing as each woman's voice brings a joyous buoyancy and light. Even the ballads are arranged with a sense of movement and a nice arc about them. A sort of clarity, if you will, as those of you who are fortunate enough to speak Armenian will recognize as the meaning of the group's name.

The issue I have with the album is that it's a little too clean and pleasant sounding. Since I don't understand a word of Armenian, I have to rely more heavily on the songs themselves to transport me to that place where my soul weeps in happiness. I want Zulal to envoke such a visceral reaction from me like I get whenever I listen to Sweet Honey in the Rock live or the album, just as incomprehensibly self-titled, by Le Mystere Des Voix Bulgares. I become deeply involved with those groups when listening to their music. It's just not the same with Zulal, yet. I say yet because several of the songs have the potential to embed themselves permanently into my subconscious. Keler Tsoler (Walking, Glistening) is just short of brilliant. It has a haunting melody that conveys the sense of movement and a sort of lustful longing that lover feels while waiting

Walking glistening is my love

He is a mountain man, a lonely, blond boy

shining like the sun; leave the sun and come this way.

That's passion to the utmost power. If the rest of the album had been sung with the same conviction that the ladies had for this song, Zulal would easily be the best album of the year in world, folk or any music.

But it's not. It's pleasant, but it could have been outstanding.

The enhanced CD offers a video of the Gakav Tuhrav (The Patridge Took Flight and English translations of the songs.

Zulal is niche a cappella at its finest. This breathy, airy trio of women sings a range of Armenian folk tunes. As with most albums that I get to review that aren't in English, I spent a lot of time listening to the technical aspects of the vocals. But I quickly realized that in doing so I was deconstructing an album and songs that not only come from a different music tradition, but are meant to be heard as an aural tapestry, an interweaving of tones, colors, and rhythms that lace together to form a vocal landscape of Armenia's rural music.

Indeed, that's exactly what happens here. I have no idea what they're singing about without looking at the liner notes or the impressive features on the Enhanced CD (note: while I had no issues listening to the CD in my car, the only program that could read the music tracks on my computer was iTunes), but when I hear the sadness in the lead's mournful tone, I can tell she is singing about something she's lost or is missing. It's easy to translate these pieces, regardless of one's level of proficiency in Armenian. If you take a look at the song translations and summaries and relisten to the music, you can actually hear the stories being played out. What's more, even with only three voices, the songs don't feel empty. Sure there's no "wall of sound", but would you expect that in folk music?

It's no surprise Zulal is garnering awards the world over for their unique approach to sharing the music of their members' homeland. I can't say I'd listen to this every day, but it definitely has a haunting, special, almost movie score-like quality. According to Zulal's website, Oscar-nominated director Atom Egoyan also agrees. Even if folk music isn't your thing, I would certainly recommend giving this album a shot. As I did, you may find it a lovely, fitting soundtrack to an afternoon alone at home.

At first glance, most would say that Zulal's first release has a very uncreative title ... but there's more to it than just eponymy. As the group states in all of its publicity materials, the word Zulal means 'Clarity' — a very apt title for this superb debut album from the Armenian folk trio.

Zulal finds clarity first in its makeup. As a trio, the group escapes the trap that many a cappella groups fall into: Zulal remains creative by avoiding mere imitation. This means there is no overlapping of voices in the mix, no muddy instrumental imitation. Each of the three women has herown specific place in the mix at all times, and this separation makes the recordings extremely clean.

This brings us to the arrangements themselves; no two arrangements are alike. They cover ground from homophony (splendidly displayed in Keler Tsoler (Walking, Glistening)) to percussive polyphony (in Ghapama, a work song about the making of a squash dish). Other songs, such as Hars Em Gnoom (I'm Going as a Bride), nicely mix the two styles, while still others find their own style in between the two extremes.

The voices of Zulal themselves are as clear as I've heard. Teni Apelian, Yeraz Markarian, and Anaïs Tekerian each have beautiful tones, perfectly suited to the exposure of three-person arrangements. The women are all extremely versatile, sometimes taking turns on the solo line in the same song but always in perfect tune and with a wide range of emotion.

The emotions themselves are perhaps the primary reason each song retains its own clear identity. In Sareri Hovin Mernem (I'd Die for the Mountain Wind), about a woman pining for her lost love, the women's voices are full of sorrow and longing; I knew what the song was about without having to look at the synopsis in the liner notes. The same holds true for Zinch oo Zinch Dam (What Oh What Should I Do?). The flirtations of the girl in the song are perfectly echoed in the boisterous arrangement and vigorous voices of the ladies of Zulal.

Zulal has crafted a fine debut album, and it is clear that their talent will continue to take them far in their sphere.

This album may be ordered from CD Baby, Amazon, and other online vendors; for more information visit the group's website.