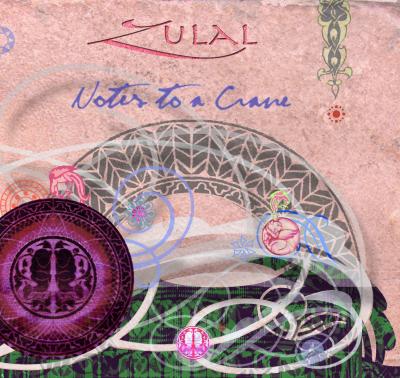 New York City-based Armenian Folk trio, Zulal casts a spell on its listeners. The three women, Teni Apelian, Anaïs Alexandra Tekerian and Yeraz Markarian, spin a sound, haunting and ethereal, extremely natural and unprocessed and named for an image that guides their sound: "clear water", which they describe as "fluid, clean and unconfined".

Fans of the contemporary a cappella genre may need a few moments to adjust to the sound of "only" three voices, and then three voices which have not been noticeably overdubbed, pitch corrected, octave-dropped, flanged, chorused or otherwise man-handled, with the exception of the occasional light vocal percussion track which, although natural sounding, represents a fourth voice (Kaster Im Shugen, Oror, Jakhrag) and on the occasional track like Mogats Shugen or Crane's Flight where an additional sung voice can be heard faintly. This won't be the wall of sound most RARB readers have come to expect. But the change, for this material, is for the better. A wall of sound would have inartfully crushed the innumerable delicate moments that comprise Notes to a Crane.

Zulal's sound is clean, close-mic-ed and stunningly similar from track to track. The album, like the name Zulal itself, flows. Even when the tracks are extremely short, like Empty Hearth (57 seconds), the songs both complete themselves and bridge the surrounding material.

This may be slightly less true for The Forgotten Suitor (28 seconds) which strays a bit from folk and begins to sound closer to collegiate vocal percussion. While not jarring, the shift does not play to the singers' strengths, despite backgrounds in Jazz Choir at Carnegie Mellon for Teni and "an all-female a cappella group" at Barnard College for Yeraz.

Truly, world and folk music fans have no excuse to miss this stellar collection of Armenian village melodies, deftly arranged and beautifully sung. Small women's ensembles and their directors should clamor for these arrangements (try clamoring here: connect@zulal.org), with simple enough parts for high schoolers to sing, but with an artistic core much more sophisticated than standard high school or even college material typically offers. It's a perfect opportunity for singers to work at the highest musical level of phrasing and dynamics, without a crippling intervalic or harmonic difficulty.

At a mild volume, Notes to a Crane sets a relaxing or meditative mood; cranked, it's an immersive, wistful, nearly mystical journey to a simpler world of the Armenian village and the elements of nature surrounding it, all through the shimmering lens of the gifted artists of Zulal.

In Notes to a Crane, Zulal channels a simpler time in a cappella. No, not the pre-Pro Tools era when you needed to bust out a razor to make your edits, nor the times of pre-digital reproduction when you might buy your favorite group's tape by mailing them a check. Zulal presents the quintessential pre-historic old school, when you sang because there simply weren't any instruments and it was the only way to get through a day of drudgery in the field.

Zulal sings traditional Armenian folks melodies, and while I am not expert on traditional music of Eastern Europe, it sounds pretty good. Throughout the brisk thirty-seven minutes of Notes to a Crane, Zulal sings with excellent blend and intonation. Their name means "clear water", and the music feels fluid. If you are sick of twelve-part arrangements taking up 100-odd editing tracks, Notes to a Crane will refresh you. These three women sing with a good deal of emotion as they tell the story of village life that a crane might see as it flies overhead. There is plenty of textual painting that helps the story along. For instance Lachin U Manan, a story about a women and her spinning wheel, features a repetitive, spinning main melody. Melodies are typically simple.

Yet, I just could not get excited about Notes to a Crane. My ears have been worn down over the years by increasingly complex arrangements and production, and Zulal's sound just seems simple and uninteresting. While listening to Armenian folk melodies has a certain novelty, I did not find them accessible to my Western-oriented ears. The tracks all tended to sound similar after a few minutes. Blame it on cultural bias, but Zulal seems uncompelling next to a more familiar-sounding women's trio such as trio mediæval.

Unfortunately for Zulal, I feel like the vast majority of the people reading this review will agree with me: these women sing beautifully and the music is neat to listen to, but it doesn't add up to much more than novelty. As a previous RARB reviewer mentioned, Armenian folk a cappella is about as niche as you can get. Notes to a Crane is worth listening to, but I don't think it will be a breakout for this talented group.

From the artist:
"In Armenian, Zulal means "clear water." Zulal, the a cappella trio, aims to create music that is like clear water-fluid, clean and unconfined. The group takes Armenia's village folk melodies and weaves intricate arrangements that pay tribute to the rural roots of the music while introducing a sophisticated lyricism and energy. Pastoral images that hint at a nation's loss, nostalgia, hope, and pride infuse the arrangements here. A soaring crane catching a glimpse of village beauties flirting at the market below, swallows flitting above ancient stones and overgrown meadows, a shepherd boy cradling a milkmaid — these are reminders of a simpler past, tokens of comfort in the complex, modern world."

Think Sweet Honey In The Rock in a different style, and you will (to a certain extent) have discovered Zulal, the Armenian a cappella women's trio. Notes to a Crane, Zulal's second recording comes complete with an impressive performance resume including stops at Carnegie Hall, the Kennedy Center, and a guest spot with Cirque du Soleil. Even more impressive is the fact all three singers are natives of the United States (Philadelphia, San Francisco, and New York), according to the group's website.

Haunting melodies, rhythmic rants, and playful counter-melodies are carefully transported via vessels of powerful open chord harmony and tension-filled resolution of dissonance. Through staggered and overlapping entrances, vocal textures, and purposeful dynamics, the three members of Zulal force the listener to search for a group much larger than the one which exists within this recording.

Many of the songs presented here loosely resemble the style and structure of Bobby McFerrin's Circle Songs. Although the repetitive rhythmic concepts grow tired on one or two of the tracks, they ultimately serve the group and their vision well.

The Armenian language sounds an awful lot like Bulgarian (located on opposite ends of the Black Sea), that when arranged in a particular cadence or rhythmic structure evokes a rousing dance on which the melody and harmony follow suit.

Organic vocal percussion adds to Zulal's perceived goal of evoking nature through music as each gasp, whisper and hollow attack of consonant aids the imagery being sculpted by the meandering melody. Although there are glimpses of this type of vocal percussion throughout Notes to a Crane, the end of Akh Ninar is the best example of all these sounds coming together in one fell swoop.

The liner notes are, for the most part, extremely helpful to any listener not fluent in Armenian, listing not only a short summary of the scene being played out, but also a listing of all the Armenian words being sung. I would have liked to see a word for word translation of the Armenian so I could further understand what is happening at each moment in the song. While a poetic summary is nice for setting the scene, some may gain an even better appreciation of the beauty or message of the piece through a word for word translation.

Every song has a strong sense of purpose and character development. While not epic in length (most clock in around two minutes or less) they come across convincingly, almost blurring our view of how a song should begin, develop, and ultimately end.

The final song on the recording, Crane's Flight, sums up the natural talent of Zulal as the fifty-one second track majestically releases the bird into the open air as we watch it fly beyond the horizon and quietly out of view.

Those not familiar or comfortable with world music in foreign languages may ignore Zulal and not buy this album. I believe that would be a great and unfortunate mistake. If you want to experience something new and expand your musical horizons, Zulal's Notes to a Crane is your ticket to experiencing music you've only ever dreamt about before.

To order this album, visit CDBaby.com or CDRama.com.