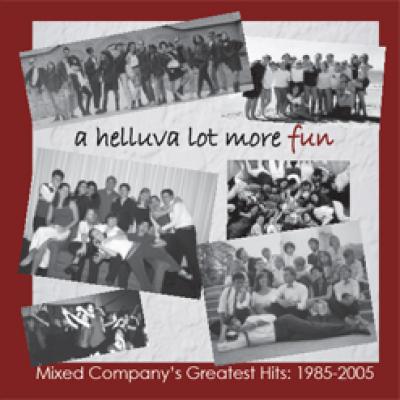 Mixed Company has produced a charming retrospective that is, indeed, "a helluva lot more fun" than many of the alternatives. Particularly if listened to in appropriate circumstances.

Listening enjoyment tip number one: Give this album a little space. It's a pretty good college a cappella album, but not a great one, so don't put it in the middle of a best-of marathon. Tip number two — sing along at will. That way you can harmonize with the soloists, who are generally quite good, without getting bogged down in the tuning, which is fine but not great. Tip number three: if you actually were in this group, or know anyone who was, you can stop worrying. You sounded fine, good even, and this album is most likely going to be a great way to reminisce. Oh, and great idea getting sponsors to buy the rights to the songs. What a great way to go legal and also reach out to your past.

A few notes on individual songs: the album opener, Major Tom, was run-of-the-mill in this group. Its successor, Blue Skies, has a fantastic energy and is in my view the best of the bunch. The arrangements average out to the early 90s — a lot of doos, pleasant but basic vocal percussion, and excerpts from other songs sprinkled throughout. With or Without You handles its tune-end smorgasbord quite well and will surely be one of your favorites if you go for that sort of thing. Another memorable track, Mary, builds to a great crescendo that rises above its less than perfect tuning. This track has a dramatic dynamic range, a nice anomaly in the collegiate universe. While we're on the subject of standouts, Jenny Baxter really has a great voice, as showcased here in Come On Eileen. Finally, Leland's Island is a cappella realite, worth of inclusion despite its subpar sound and live-recording blur.

I'd heard many of these songs the first time around. Even though I didn't particularly remember them, I found that on first listen my impressions matched almost perfectly with my numerical rating from earlier visits. I took a few more spins and changed my mind a few times, but kept my overall impression of a good group with a consistently pleasant sound. If you end up with this record, I think you'll agree.

Surprised after my first listen, I thought, "This is their 'Best of'?". "Greatest Hits" is as true a subtitle as there ever was. The dominant flavor in this re-mixed and re-mastered compilation is not great songs performed well by a group suited to sing them, but crowd pleaser songs that college groups crank out to wild applause. In my college group, these were the songs after which I'd lose a little respect for the audience and glance down at the stage floor, embarrassed.

My sense is that "Helluva" can't be confused to be the "Best of Mixed Company". The album's title shows how tightly Mixed Company defined this project: "the songs our audiences loved most and that we had the most fun singing over two decades (2!) ".

Any group with twenty years of performance (20!) can certainly come up with good songs sung better than Blue Skies, Closer to Fine, Jenny (867-5309), Come On Eileen, Road to Nowhere, and "Leland's Island" (Gilligan!). The techno-dance song Blue Skies is mind-numbingly repetitive with a five-word chorus. It's over the top, piercingly sung, and obnoxious. Closer to Fine, a mediocre song from the off-kilter hinterlands of unstructured folk singing, is forced down the listener's throat with brazen over singing. Jenny (867-5309) is a one hit wonder I'm embarrassed to hear people sing, especially that "neye-ee-eye-een" contamination of Western music. At least Come On Eileen has a catchy melody, despite the silly tempo changes. A muddy bass line, artificially tight sounding solo turns, and a manic tempo mar this version. Drunken dartboard pitch in the upper voices mortally wounds a potentially enjoyable Road to Nowhere, while grating "wah wah wah"s and a mockable "Ponderosa"-like bass line render it killed. To an outsider, Stanford-themed lyrics set to the Gilligan's Island theme seem insulting to such a smart school. The song's uncoordinated rhythm, belty blend, and crowd noise are an insult to the album. Yet all these songs shine with energy, a difficult feat for studio recording. It's understandable that misguided audiences could launch them onto a "Greatest Hits" album.

Much of the "Helluva" is satisfying. This two-decade sampling reveals that Mixed Company stands heavily on the shoulders of its lovely, powerful women. Women often substitute for typically male solos, achieving greater energy and tension than I believe Mixed Company's beta males could.

Nearly all the Mixed Company ladies are expressive in verses and powerful in the choruses. A brilliant female solo selection for Toto's Africa leads to an impressively enjoyable version of the song. The soloist floats through verses and absolutely powers through choruses, her female voice achieving a power most male attempts at this song can't attain. The lusty power and insistent urges of the soloists in Holding Out For a Hero and Alone wrest command of these power ballads from their diva backing vocals. These three are awesome solo performances.

The ladies have a lush, tender side as well. Mixed Company's arrangement of A Sorta Fairytale is my favorite version. The crystalline soprano lines are well planned, well recorded, and well sung. The whispered "so sad" lyrics add volumes to the verses. Mary's wistful soloist moves through mellow, wispy, and brassy presentations — a dynamic performance. These altos clarify the mold of the Mixed Company female soloist — warm, expressive, clear, powerful. All three of these songs would be excellent were the background guys more skilled and confident.

Best I Ever Had is also the best version of this song that I've heard. The arrangement is washy and liquid, a smooth backup for the best male solo of the album. His voice is beautiful, stylish, and as confessional as the original. The sad truth is that Mixed Company does not appear to attract many good male singers. Female voices dominate the balance and tone of most songs, and the guys are subservient to them.

Most yearbook albums are like a piece of cheesecake. The top layer is thin yet fluffy — lighthearted, fun songs that go down easy but don't leave much impression or satisfy the appetite. The middle layer is where the flavor is, songs that show us the preferences of all those cooks who've graced the kitchen over the years. The bottom crust, usually a bit tough to swallow, is almost always cooked up according to some family tradition. In essence, though, both cheesecake and yearbook albums are mostly cheese. I'd recommend picking up "Helluva" — just skim off the top and leave the crust on the plate.

I never thought that Mixed Company's name was particularly clever. Quaint, sure. Old-fashioned? Definitely. So it never made sense to me why they chose that name in the first place, or at least never changed it. But now I know.

See, Mixed Company is 20 years old. That's right, compared to the rest of the world of college a cappella, in which the average group age seems to be about 7, Mixed Company is downright ANCIENT. And so now it's clear to me: their name's like that because it had to be, seeing as they're one of the first mixed a cappella groups in the country. Kinda clever after all, I suppose.

A Helluva Lot More Fun is an interesting release. It's not only the first full Mixed Company album I've heard, but it's basically a 20-year time lapse view of collegiate a cappella. It has tracks from nine (yes, 9) different Mixed Company albums, from "Loudest Voice Wins" (1987) up to Tree Museum (2004). A handful of the songs were released before arrangers had a good handle on what to do with the females in the group. Half the tracks are pre-vocal percussion. Three-quarters are pre-Auto Tune.

But the track order is baffling, to say the least. Instead of opening strong (like maybe a previously-unreleased track, or one of their 5 BOCA appearances), the powers-that-be chose to start with one of their earliest, sloppiest tracks, putting me off from the start. And though they warmed me up a little in the middle (their three best tracks are back-to-back-to-back), my approval fell when they closed with two uninteresting (to outsiders, at least) live tracks, including one from their very first recording.

(Sidebar: My favorite track, Life in a Northern Town, was — surprisingly to me — NOT from a newer album. This perfectly-arranged take on such a perfect a cappella song should, in my view, certainly be included in discussions of best a cappella tracks ever, especially considering its release date of 1994.)

This album gives me a good glimpse into the 159 past and present members of Mixed Company. A lack of strict attention on tuning shows me they're not stuffy, but since they haven't corrected these problems in the last 20 years, it also shows me they don't really care. Perhaps they have, indeed, had a helluva lot more fun than most serious a cappella groups. Maybe that's their appeal; maybe it's their downfall. It is what it is, essentially.