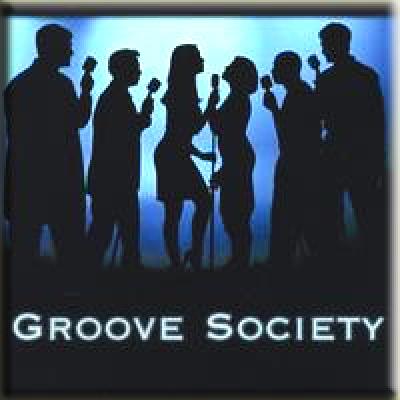 An impressive new sound in vocal jazz is here, a collection of head-turning solo talents in the service of a larger groove. They call Colorado home, but the spirit of Brazil, the South American and Latin rhythms — these have been imported in bulk for Groove Society's eponymous release. The arrangements, penned almost entirely by the uber-talented Joe Herbert, swim leisurely in the silky, pitch-perfect chromaticisms of an often smokey jazz idiom. But unlike much vocal jazz, Groove Society wisely allows bass and percussion the prominence of more pop-influenced music. And most importantly, the impressive young voices have room to shine, room to riff, and room to lead the group through both their well-worn classic selections and a few songs that rarely receive the attentions of the jazz community. Vocal jazz enthusiasts are advised to buy this CD early and often.

To balance the above buckets of praise, I present my petty gripes. Groove Society has a love affair with two dynamics: mezzo-forte and forte. And that gets boring. It's hard not to love these solos, hard not to love the chords, but reductionist phrasing keeps the CD from the realm of the greats. That's actually a crime since it's so obvious that these guys could easily span the gamut from intimate to bombastic had they so chosen.

If the next CD displayed original material, if it broke out of the vocal jazz mold and delivered some real surprises, if these controlled presenters became intimate and honest storytellers ... then Groove Society would really be a thing of greatness.

But these guys aren't even all out of school yet! Gripe session aside, Groove Society remains expressive, enjoyable, fun and often danceable, a guaranteed treat. Gobble it up.

Groove Society's self-titled debut CD is a strong premiere. Solid singing, tons of energy, and some great solos make this album stand out.

The first thing that impressed me about this album was its sense of energy, especially with the intense opener Oye Como Va. Throughout the album the energy never falters — crisp, clear, and never lazy enunciation and constant commitment to the songs push the album along.

Unfortunately this energy, coupled with some of the arranging, is also the album's biggest downfall. Many of the tracks veer from traditional jazz arranging with intricate, rhythmic inner voicing; the opener and Listen to the Music are the most obvious examples. Here the inner parts are just too constant and incessant, with no variation or nuance — they become distracting and even annoying. It completely undoes the artistry of rest of the song.

I found my favorites being though arranged in the more traditional jazz style, with complex harmonies instead of complex rhythms. Groove Society adds to this a flowing baseline to really live up to the group name. I'm Beginning to See the Light is an excellent example. I also love the arrangement of Summertime, especially for its innovative use of time signature and time changes, not to mention a fantastic solo.

Soloists tend to be pretty good, but the standout is LaDamion Massey. His tone is phenomenal, his delivery impeccable. He amazes on Summertime and manages to surpass on Tribute to Earth Wind and Fire.

Production is strong and innovative; I especially enjoy the guitar on Oye Como Va. Percussion tends to reinforce incessant performances - its too busy, and overly complicated. It would serve the group to lay a simpler, more consistent beat and stick with it.

All in all this is a good album showing some great innovation of the traditional jazz style, some of which works and some of which doesn't. Its obvious the group has tons of talent and I look forward to seeing them grow into future recordings.

Well, they certainly got the name right. If there were ever a society that knew how to groove, these kids are that utopia.

Groove Society really knows how to build background parts. Oye Como Va stacks layer upon layer upon layer of percussive and melodic ideas without losing the clarity or integrity of any of them. Summertimeshifts skillfully between a jazzy 5/4 and a bluesy 4/4. Talvez Seja Voce has a section at the end where the group overdubs themselves in such a way that it sounds like a huge audience is singing along with the band on stage and it's executed wonderfully. Nowhere in the 9' 22" of Tribute to Earth Wind & Wire do I miss the sound of a horn line. The mood is always appropriate and everything is in tune.

In fact, the two "weak" songs are only such by comparison. Rain gets stuck in this paragraph and not the previous because it's not as effortless as the rest of the album. While it's performed well, and the actual rain being used as a background is a nice touch, it just felt as if Groove Society didn't have as strong a connection with the message or the music that left it lackluster. Listen to the Music is also banished to this nitpicking paragraph of shame only because it is out of character from the other 10 tracks. Groove Society spends so much energy creating a musical personality of jazz, funk, blues and Latin and then comes out of nowhere with a straightforward rock piece. Again, it's well sung, well-arranged and well-produced (the occasional flange was well-placed) but the song feels, well, out of place — sort of, "Oh yeah, we can do this too."

I'm putting down the fine-toothed comb now, I promise.

Scatting in this album is excellent. It builds over complete phrases and consistently creates a climax that helps to propel the song forward. The drumming is always supportive and creative. I laughed at the vocal timbales in Oye Como Va but then I realized that the real instrument makes me chuckle too, so I guess the effect was successful. Even the cover art is cohesive with a calming cool blues theme and black silhouettes of the singers.

So that's it. Lots of great stuff is going on here. Check it out.

To order this album, please visit the group's website or CDbaby.com.