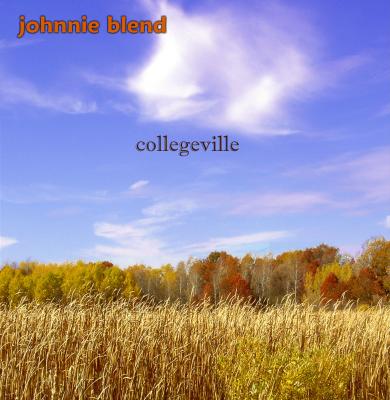 I want to give the guys of Johnnie Blend major props for releasing a collegiate debut disc that is slightly above standard "yearbook" status. Johnnie Blend's recording Collegeville is deceptive in its simplistic approach to collegiate a cappella, yet captivating in its dedication to using nearly the purest form of the human voice. A person could be fooled into thinking that it's a great album upon initial listen.

That is not the case.

Let me temper that: The recording is good for a debut disc, though only friends and family will ever know it. Too many pitch problems and lackadaisical performances prevent Collegeville from having a more broad-based appeal.

Occasionally, the refusal to use pitch correction techniques and devices serves the group of men well, notably on No Diggity and one of my new favorite tracks of the year Clint Eastwood. But more often than not, this steadfastness only illustrates that the musicians aren't quite as talented as they may think they are. The lack of support on sustained phrases bends the pitches in unappealing ways. The tracks Not For All The Love In The World and When I Get You Alone bring to the forefront tenors who cannot control their instruments for longer than eight counts.

The flipside is that when each of these boys sing lead, they open up with a pretty glorious sound. There is a youthful zest that is quite appealing. Too bad the liner notes fail to mention who these performers are. Yes, again, a recording has been released that doesn't give credit where credit is due.

Arrangements lead me to believe that these guys are probably great live. The songs are mostly fun and not difficult, which generally leads to performances where other aspects are emphasized. So much else is going on that an audience member doesn't have to focus on the intricacies of that "do-dat-dih-bum-jigga" line in the bridge of the song. Or the string of old school "do" and "bah" that make up the entire verse of every song.

As has been said many times before, if you are going to record an album, make use of the wealth of programs and opportunities that are available. There is no benefit in putting out an inferior product just for the sake of saying that you went "au naturel", especially when "blend" may not be the strongest asset of your group.

I'm putting out a call now for a vocal percussionist union, you all are getting neglected so often in recent collegiate recordings. That's a shame.

The tuning is the worst problem on Collegeville. Every track has pitchy moments, but it gets worse with each song. Collegeville feels like a live concert sung by a group of guys with no endurance. Each successive song is more out of tune than the previous track. It's as if Johnnie Blend recorded the album at one time, in the actual order of the track list. No Diggity starts the album off with some good harmonies, When I'm 64 is a decent effort of a simple song, and Stayin' Alive has a nice groove, but that's about as good as it gets.

The chords in Clint Eastwood sounds really odd. This could be the way the song sounds, but I'm going to guess it's not. The chords just don't quite meld. The soloists sound a little too "white" on the Gorillaz track. Walking After You is an odd arrangement highlighted by a pitchy solo. The voice control is lacking with some notes simply out of tune.

Johnnie Blend also takes itself too seriously. The music produced on Collegeville feels forced and would benefit from some humor. Afternoon Delight is the perfect example. With the success of "Anchorman," especially among college students, and the spontaneous rendition of the Starland Vocal Band song performed by Will Ferrell and the gang in Ron Burgundy's office, Johnnie Blend would have profited by incorporating the movie somehow into the arrangement. Come on, have some fun guys!

Overall, everything about Collegeville is just plain average or slightly below. There is nothing outstanding, but nothing ear-piercing. Go ahead and pass.

A word of caution to all you groups out there: be careful about disclaimers in your liner notes. When you include something like "No pitch correction devices were used in the making of this album.", you might think you're making a valiant case for your skills. But, in the opinion of at least half the a cappella world, this disclaimer means, at worst, that you have no respect for the recording process and might as well have released a live album. Even at best, the disclaimer shows a stubbornness and an unwillingness to adapt with the times.

If you couldn't already tell, Johnnie Blend put this disclaimer on their album. And, to be honest, it pissed me off so much that I was ready to make this review a list of every single tuning error in the entire album. So, in an effort to be fair, I put the CD back in its case and waited a week.

Now I've given it some time and some space, and Johnnie Blend should be glad I did. Because the album isn't really that bad at all, but I wouldn't have noticed a week ago.

The group could be a little tighter — the blend would improve if the guys sang with more breath support. And that would help fix the tuning, which was off a bit throughout but only glaringly bad on a few occasions. The biggest thing wrong with the album isn't any of these, though. It's the arrangements.

For one, the backups distract far too often — syllables like "badiddle iddle ee doo" (Lighthouse's Tale) take listeners right out of the zone the rest of the song was spent getting them into. And too many "doo"s and "wah"s and even "doowah"s just end up muddling all the songs together, and adding to the already-too-redundant repetition.

That in itself is probably the biggest problem with the album. All the songs, it seems, repeat either a short motif throughout, or repeat the chorus five times too many, or just basically repeat the whole freaking melody over and over again. Once the arrangers learn to make cuts or to make each verse sound different from the last, it'll help. Repetition works in instrumentals because we don't listen to the backgrounds, but in a cappella we DO — that's the whole point.

I certainly don't respect Johnnie Blend just because they didn't use any pitch correction; I respect them because they're talented and musical, and once the arrangements catch up to the singing, they'll be on their way to joining the elite. But for now, the whole package is just average.