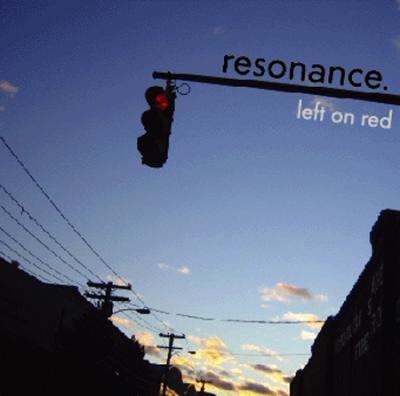 In Act I of Gilbert & Sullivan's "The Pirates of Penzance", the young Pirate Frederic, on the very day that his indentured servitude ends as a pirate, addresses his comrades thusly: "Individually, I love you all with affection unspeakable; but, collectively, I look upon you with a disgust that amounts to absolute detestation."

That's not an entirely inaccurate way of describing my feelings regarding The Resonance of MIT's CD release Left on Red. Actually, "detestation" is far too severe a word, but this was very much a CD where the individual parts were far greater than the whole sum.

Taken as single tracks, Resonance most notably offers up some really nifty arrangements — layered, complex, full, rich with a careful attention to detail. If anything, the arrangements are almost too full, and could a bit more "space" to breathe. The two tracks scored as 5's were elevated for, among other reasons, not sounding as constant and unrelenting as the others. Tuning is spot on, as might be expected from group that gives a shout-out to Autotune in its liner notes. Energy is up from start to finish and while none of the soloists will blow you away, they're all enthusiastic, pleasant-sounding, and up to their individual assignments.

Trouble is, listened to successively, there is sameness to virtually all of the tracks — the "feel", the voicings, the rhythms, the dynamics — that makes the CD as a whole a bit of a snoozer. It doesn't help that the repertoire choices are of similar ilk nor does the inexcusably treble-heavy/wimpy bass mix which, if fixed, would have at least kept me engaged rather than nodding off over the CD's 2nd half. The arrangements too, while carefully constructed as described above, have very little in the way of development. Where they start — which is typically full throttle, with multiple layers and plenty of ornamentation — is inevitably where they finish given that they really have nowhere to go but down after the first verse and chorus. I'm no mathematician but since it is MIT, I might go so far as to suggest that any two tracks on this CD are a sufficient "sample set" to know exactly what the rest if the CD is all about.

In all I'm pleased and disappointed. First with the Logs and now with Resonance, I'm consistently impressed by the sophistication and musical production values that are becoming de rigeur for MIT's a cappella groups — now if only I enjoyed the music quite as much.

Left on Red, the second album from five-year-old MIT Resonance, is a great example of just how important quality arrangements are for a cappella groups, both live and in the studio. Any group with decent voices can sound good with great production, but great arrangements can make it more interesting, more interactive and more enjoyable. It's the arrangements that really make Left on Red an excellent album.

Make no mistake about it, Left on Red is a heavily produced album, not the raw live-concert-feel many a cappella purists still yearn for, but don't let that deter you from giving the young Resonance a listen. Sure, you can feel the autotune and production radiating off the disc before you pop it in the CD player, but the beauty is that you can still hear all the voices once the music starts. Nothing is blurred to make the members of Resonance sound like instruments or synthesizers. Mixing and Mastering Engineer Viktor Kray used just enough effects to compliment the great arrangements and nice voices brought to him.

The album kicks off in high gear with the Red Hot Chili Peppers' Fortune Faded, a hot track overflowing with energy. Resonance chose the perfect opener, laying the groundwork for the theme and feel of the album. Let Go is up there with the best covers of the Frou Frou hit, followed by the "BOCA 2006" featured Mystify. The fun continues with Fefe Dobson's Take Me Away. I couldn't envision a better cover of this song; really a top-notch effort from the MIT coeds.

Yes, MIT Resonance isn't one of the more well-known a cappella big shots. But if they put out more albums like Left on Red, they'll soon be mentioned with the rest. If you enjoyed recent albums from other coed groups like the JHU Octopodes, Stanford Mixed Company, BC Bostonians and Tufts Amalgamates, then you owe it to yourself to get Left on Red.

I have to confess, I never heard of MIT's Resonance before they showed up in my mailbox. And, based on the track record I've had recently with groups I've never heard of, I wasn't expecting much. So it was with trepidation that I first put Left On Red in my CD player ... and wow.

Right from the first crescendo, Resonance hits it. They take the high-tech sound popularized by groups like MIT's Logarhythms, and add their own (co-ed) twist. While the last thing this sounded needed was more treble voices (their otherwise brilliant engineer, Viktor Kray, might be well-served to back off the high end a little in the future), the wider vocal range adds a depth to the sound I didn't know was possible.

Sure, some people aren't going to like the crazy production, but for me it was a welcome respite from the naturalistic albums I've been listening to lately. They could, however, work a little bit more on finding their acoustic sound — songs like Ghost and Love Song for No One end up losing a lot of the soul that made the originals so good. And relentless percussion, prevalent on so many of the songs, wears a bit after a while.

I can't forget to mention the arrangements; I don't usually comment on these because I've learned that I'm terribly picky, but these are superb. The layers and rhythmic variations on the majority of songs add a depth not often heard from groups such as this. I'm amazed that this much musical creativity — especially that from David Vincent — comes from a university with no music school.

The sixteen (!) members of Resonance utilize well the mathematical precision their school is famous for, but add a healthy dose of musicality and cleverness. Left on Red is great.