Perły i Łotry (Pearls and Rascals) 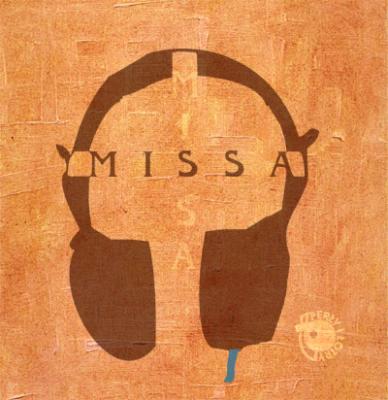 Perły i Łotry's Missa is one very strange album. Missa has a split personality. Half the repertoire is religious choral music sung in Polish, with musical influences from the former Eastern Bloc. Half is rollicking spirituals and gospel sung in English, with musical influences from the American South. Listening to Missa left me with the distinct impression that Perły i Łotry is a live band not used to recording.

The album's first thirteen tracks are mostly Polish, religious choral music. They average an easily digestible 1:30 in length, and several songs transition into each other without breaks. These songs are very simple, equivalent to junior high school or easy high school arrangements. They are blocky, full of quarter notes and amassed chords, with every voice singing the lyrics in harmony to the melody. Voices complete phrases and wait patiently for all voices to close their lines before moving forward in lockstep. The movement is entirely horizontal and regimented. These tracks, though sung by just a few voices multi-tracked many times over, evoke a pale image of the Soviet man choir, but without the unblinking fiery nationalism that makes them exciting.

There is a long silence tracked after the conclusion of Stoj przy mnie, and we later learn that the group is signaling a departure into something new and exciting.

Perły i Łotry's next nine tracks average three minutes each. Though the two personalities split roughly equal time, the later tracks dominate the album's flow and energy. To me, the feeling is almost dismissive; "Okay, we're through all the choral stuff. Onto the reason we're all here!". This is the first of many clues that the heart of Perły i Łotry is in live performance.

This second half of Missa is boisterous American spirituals sung in English, and it is riddled with arranging elements common in live performances. The arranging is contemporary, with a clear soloist, limited vocal percussion, some bongo drums, ride cymbals, and trumpets, dynamic bass lines, and dissonant chord stacks. Perły i Łotry wields live show tricks like key changes, clapping on beats two and four, party/crowd noise, repetitive lyrics, double choruses, and four bar percussion cutouts to keep the energy high and the audience participating. But there's a problem; I'm an audience of one.

It doesn't take experience as a live performer or chronic town festival goer to hear that Perły i Łotry is geared for live shows. Everything about Missa, from its low- to high-energy track ordering to its arranging style to the pickup breaths that lead in nearly every track, screams, "We are not a studio group!". And so much of the work that Perły i Łotry has invested in its live performance is lost on the album listener. The techniques that excite an audience of fans sound cliché to the uninvolved, couch-sitting reviewer. The visual elements of stage, lighting, and coordinated movement are implied and nearly tangible to the mind's eye, but visible they are not.

Lastly, Missa may pass as good American spiritual music in Poland, but Perły i Łotry's performance does not succeed for the American ear. Mainly, the group needs a pronunciation coach. Polish accents cloud all the English words, and many lines stiffen awkwardly under the weight of the Eastern European tongue. Phrases that turn and flow pleasingly under the lazy speech patterns of the Southern drawl instead turn comical. Perły i Łotry sings English in the ridiculous stereotypes of Boris and Natasha from "Rocky and Bullwinkle", with thickened "r"s and every "ih" an "ee". Examples: "brahther and seester" and "leetle cheeldren" (Git on Bo'd), that old time religion "eet's goot enough for me" (Gimmie Dat), "deep reev-air" and "I want to cruss oh-vair into cain-rah" (Deep River / Roll Jordan Roll). The songs may swing from time to time and Perły i Łotry may nail every gospel chord, but the rhythmic treatment lacks soul and the gospel lacks the holy spirit.

Missa is an impulse buy. It's the album you buy as you shuffle past the concession stand on your way out to the street, wide-eyed and breathless after a fun live show. It's the album you carry home while the night's songs are still ringing in your ears. It's the album you fondly abandon on your CD rack until the day before the band's next show at your favorite local club.

The Polish group Pearls and Rascals delivers an album that offers few pearls and quite a few rascals. Diverging from the group's traditional shanty repertoire, Missa suffers from trying to incorporate too much of the religious idiom: spirituals, classical mass, folk tunes, and some pop/jazz ballads. The back of the jacket cover separates the tracks into three segments on the disc, grouping Tracks 1-7, 8-13, and 14-22. Considering that it may just be a layout quirk, I categorize those groupings as the Mass, a folk tribute, and a pop & spirituals set.

Because the album is trifurcated in such a manner, I find it hard to enjoy Missa as a complete work in and of itself. The mass is good, not outstanding. The six members of the group have strong voices and excellent musicianship, but I feel like I'm missing the spark of creation that comes when listening to a well-performed Kyrie and is carried through to a tear-inducing Agnus Dei. The Benedictus was the only point where I felt that the group completely connected with what they were singing and it caused a lump in my throat — truly glorious.

The middle section is by far the best as a unit. For me, Missa would have been a better album made only of tracks like Tu sei sorgente viva and Pearls and Rascals other folk material. These tracks are sequenced so that they flow directly into the other to create an aural soundscape of praise. I'm not sure what a more thematic thread is to this grouping of songs as there are no Polish to English lyric translations provided, but the emotional output transcends the language barrier.

Except when the guys sing in English. "I am sure I shall see" is like the speck of dirt at the center of the wonderful pearl that is this section. Unfortunately, the Eastern European accents continually pull me out of my enjoyment of the music.

Especially during the spirituals. In section three, I started to focus on what I couldn't understand instead of simply enjoying most of the music. Sometimes my non-enjoyment stemed from the odd tuning issues that cropped up, as the guys tend toward a very brassy and tinny intonation when singing in English. On the opposite end of the spectrum, during this last section their more pop/jazz numbers are captivating. Aniol Stroz is my favorite track on the album with Erue Me Domine a close second. Both feature sweet soloists and lush chords and phrases.

There is occasional use of percussion instruments and Gimmie Dat has blaring trumpets. Take that for what it's worth.

The album will appeal to some — especially if you like Polish musicians or like hearing different takes on American spirituals.

Stop me when this sounds familiar.

Every a cappella group must, at some point, contend with the trade-off of blend vs. energy. It's tough to stay in tune if your part bounces around all over the place, but it's hard to infuse your music with energy if you're singing "ooh" for an entire song. This is not to say it's impossible to overcome this problem — there are many groups that have.

And Perły i Łotry is one of them.

The group infuses each of the songs on Missa with their own brand of energy — pop when they want it to be, smooth and solemn when they don't. The members of Perły i Łotry show their love of singing by giving each song an enthusiasm that transcends the language barrier. It's clear they're excited about singing the new album, which in turn gets the listener excited to listen. And that's always a good thing, especially when what one has to listen to is tuned and mixed as well as this album. With a little more diction coaching, especially in English, these singers will have all the tools they need to become a worldwide a cappella powerhouse.

The arrangements, all created by Adam R. Saczka, stand out as one of the most spectacular aspects of Missa. The wide variety of textures and settings, from homophonic, sacred hymns to rousing, multi-faceted spirituals, creates the kind of diversity that keeps an album interesting from start to finish. The arrangements are so good and fresh, in fact, that I feel that all but two songs (Nobody Knows and Deep River / Roll Jordan Roll) feel too short.

My main argument with Missa is the song order. They divided the album into three sections: various types of sacred settings, short homophonic hymns that flow one into the other, and then the aforementioned rousing spirituals. Dividing things this way makes each separate part seem very one-note, especially by the end; after a few slow songs you want something fast, after a couple short songs you yearn for something long, and after a handful of uptempo, percussive songs you need for the tempo to slow down again. The album works much better on shuffle.

Perły i Łotry is clearly one of the great groups. Their talent level is right on par with the rest of the world's top vocal bands (even if they sing in Polish), and with a little more vocal percussion (the only actual attempt at it is on the hidden track, and even it doesn't flow very well) they will truly rock. I can't wait to hear their next release.