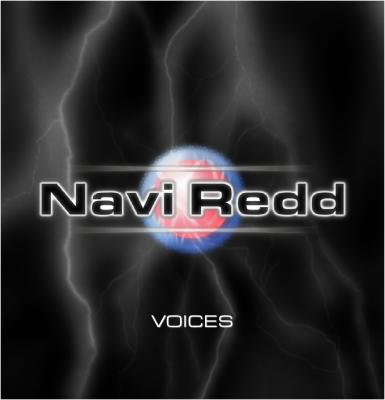 Navi Redd marks the first opportunity I've had to review a group from South Africa, and while there's a solid foundation, the building itself is a tad underwhelming.

To be fair, I might have set my expectations too high when I realized that this was a professional all-male group with a whopping nine (!) members — so many possibilities. And in all honesty, these guys can certainly sing, albeit sometimes sounding a bit too "trained" for their material. But I was even more disappointed when Navi Redd's sound proved to be so unusually and unexpectedly small. Now don't confuse "small" with "soft", which Navi Redd most certainly is not. Their bass is thundering and their two vocal percussionists (one percussionist and one drummer) are virtually in constant motion in a permanent fortissimo. But the trouble is that neither the soloists nor the painfully simplistic backgrounds are up to the same level of sophistication.

Indeed, so much of what is wrong with Voices can be traced to the arrangements — or lack thereof. Almost without exception, every track finds a solid, detailed bass line, accompanied by a layered percussion track(s) — the beginnings of a solid arrangement. But on track after track, on songs that I knew — Brick in the Wall, The Final Countdown vs. Eye of the Tiger, Grease Medley et al — and songs that were new to me — Two Beds and a Coffee Machine, Common People, Sit Down et al — the minimal or utter lack of a unifying, cohesive, textured, propelling and compelling background block completely undermines the song, quickly reducing it to bland and boring often before the first chorus is complete.

On the plus side, you're unlikely to find an album with as eclectic a repertoire as Voices and if you're a fan of the track list, then you might pick up the album if only to obtain copies of covers you're not likely to otherwise hear a cappella. To their credit, the guys of Navi Redd have created a bit of a niche market for themselves here in the U.S., by covering a fair amount of English language material that originates from Europe, Africa and/or Australia (Savage Garden, Pulp, Steve Hofmeyr, James, Johnny Clegg etc).

But unless that music is of particular interest to you, you can probably skip this CD. I'd almost recommend to Navi Redd to do as baSix did an album or two ago and solicit the help of one or more seasoned veteran arranger/producers like a Deke Sharon or Britt Quentin. Considering what those gentlemen and others like them can do with just four or five voices, I can only imagine what they could do with nine — and THAT would be an album I would be first in line to buy.

Navi Redd, an all male pro group of nine from South Africa, presents an album that could be excellent were it not for a slew of bad choices. While the skill is there, the album falls short of potential.

First off, I was astounded to find this group had nine voices. After my first two listens I thought six tops. For nine people, they really should be churning out fuller material. Arrangements tend to be sparse, or at the very least don't showcase what nine professional singers are capable of, and there's no way these nine guys are living up to their full potential. For instance they have two people on vocal percussion, which could easily be covered by one.

Secondly, they need to pare down their repertoire. The disc is all over the place, jumping from Carmina Burana to Grease, Pink Floyd to Europe. There's no consistency and the album feels disjointed. This is made worse by an abundance of medleys, most of which consist of songs with absolutely nothing in common. For instance, Crocodile Rock ends up in a song with Del Shannon's Runaway. The worst shocker, however, is a very well done medley of Where is the Love and With or Without You busted up by the theme song from TV's The Fresh Prince of Bel Air.

Finally, what's the deal with the 'countertenor'? Unfortunately, there aren't any solo credits, but whoever is singing the countertenor parts is down right awful. Makes me want to turn my stereo off. During the Grease Medley, I couldn't decide to laugh or feel offended I was subjected to its ridiculousness. Other soloists have so much vibrato it sounds like a Super Nintendo soundtrack. The Final Countdown is one example, while the soloist on You're the Voice ruins an otherwise very catchy tune.

These three negatives, which are easily corrected, overshadow what is a pretty good group. Engineering is good, most of the soloists are strong (particularly the Justin Timberlake sound-a-like), and the countertenor line notwithstanding the blend is good as well. Maybe next time they should stick a little closer to home: my favorite track was the Johnny Clegg Medley. While I'm sure what one stateside reviewer says won't make this group change, I would love to see Navi Redd's next album succeed where this one fails.

The South African singers from Navi Redd have colorful voices and a lot of talent, but the inconsistencies on their latest release limit their appeal.

The first half of the album sets a distinct sound — one of great beauty and great production value. It also sets a mood — these works are protest songs, political songs, social justice songs, don't-lose-hope songs. We hear U2's stunning homage to MLK followed by You're the Voice, which asks — "How long can we look at each other down the barrel of a gun?" Next, The Black Eyed Peas wonder, "Where is the love?" and soon Pink Floyd declares, "Teachers, leave those kids alone." Two Beds and a Coffee Machine recounts an abused mother with "another bruise to try and hide", and Common People tells the story of those who are "living on free food tickets", and get "water in the milk from a hole in the roof." Navi Redd makes quite a statement with these openers, and sang these works with passion and grace, and with unique vocal timbres and compelling arrangements.

I was really digging Navi Redd by this point in Voices. I was under their spell, ready to roll up my sleeves and try to fix the world, when a slow, redundant version of, get ready for this, Tina Turner's Simply the Best came on. Not quite what I expected and not a good fit with their established theme. But, I still held out for the return of glory. And for awhile, the music was right back where it started. The Chant was a spirited and funky standout, and Agter Elke Man (Afrikaans) had a peaceful yet gripping melody. Yep, things were wonderful again.

And then it happened. I wasn't prepared for, and didn't want, this album to continue with a ridiculous coupling of The Final Countdown vs. Eye of the Tiger. Definitely a strange abandonment from the prior works on Voices. Amazingly, the boys treated the listener to more high quality songs (Sit Down and Let Me Entertain You) before jumping ship for Grease tunes with a continuous, poorly executed, extra ridiculous impersonation of Ms. Newton-John. The downward spiral continued with an 'N Sync number, a medley with an homage to Speedy Gonzales, and their anticlimactic closer — Mony Mony. And incredibly, another hopeful gem, the tribal infusion Johnny Clegg Medley, was thrown into the middle of the teenybopper and oldies.

The bait-and-switch, the roller coaster of good and not so good on Voices, was exhausting. I heard great things during the political and powerful numbers on Voices — fervor, energy, and a vocal band that wasn't afraid to sing about the hard truths. The goofy numbers just undermined their more important efforts. I know — in the world of a cappella covers there will always be a bit of this and a bit of that on every album. Normally, this is a great thing — who doesn't like variety? But less attention was clearly paid to the lighter numbers on Voices, so much so that it felt like a two-albums-in-one operation. Here's hoping the boys will smooth out their arrangements and track list for their next release.

To order this album email the group, visit the group's website, or visit A-cappella.com.