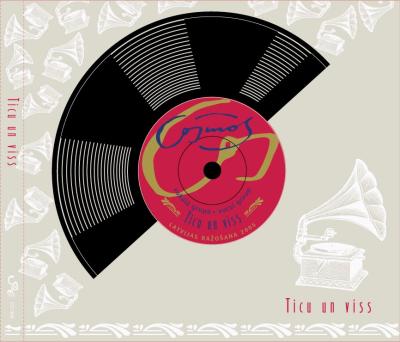 They won second prize at the International Choral Music Competition in Gorizia, Italy in 2004.

This album, Ticu Un Viss, went "gold" in the month it was released (for selling 9,000 copies) and the group's first two albums have gone "platinum".

Their single, I Hear Your Heart, recently won the Eurovision Latvian National Final and the group will represent its home country in the International finals on May 20th in Greece. This is the first time that an a cappella group and song has made the Eurovision finals.

They regularly participate in master classes with groups like The Hilliard Ensemble, Take 6 and The Real Group.

They got Bobby McFerrin to sing Don't Worry, Be Happy with them in concert, the first time he has done so in 17 years.

Simply put, there is no question that Cosmos, the gifted a cappella sextet from Latvia, is immensely talented and deservedly a big deal in the world of international a cappella.

All of that said, there is really no pressing reason for you to buy this album and if you do, I suspect you may enjoy its artistry once or twice, but it won't end up in your iPod or on regular rotation in your CD player.

Unlike their last effort, Pa un Par, which came with quite a few popular American tunes and a wide variance of arrangements and "feels", Ticu Un Viss (translated: I Believe and That's It) is far less user-friendly for the English-speaking audience. Once again, there are no liner notes and that is even more bothersome this time as all but one of the tracks is in Latvian or Russian (though two others are translations of well-known Christmas songs).

Tempo-wise, the album is stuck in mellow gear — there are flashes of hip-hop/funk in the title track and The Tired Toys Are All Asleep and The Little Cricket's Christmas veer for a moment into vocal jazz, but there is really nothing to make the listener stand up and take notice.

Well, that's not entirely true — the pitch-perfect singing and exquisite (and heavily produced) blend definitely got my attention, but it simply wasn't enough to sustain my interest. The arrangements are executed flawlessly, yet without wonderful chord substitutions in O Come All Ye Faithful, some similarly tight jazz backgrounds behind the spoken word "I Don't Believe and That's It", some nifty background noises on several tracks (birds, crickets, wind, etc), and the multiple shifts in feel on the final track, everything is pretty simplistic — lots of humming and "ooh"-ing and "aah"-ing. Flawlessly rendered, mind you, but ultimately a tad boring.

So skip this CD but keep your eyes and ears on Cosmos. You might not know it from this album, but they're still one of the best groups you've probably never heard of.

It's been a few months, and I haven't been stoned to death by one of Cosmos's adoring fans (or one of my fellow reviewers whose enthusiastic take on Pa un par differed a bit from mine). So I question whether I should press my luck by taking on their latest offering Ticu un viss. But here goes ... while I found this album more engaging than Pa un par, it was still ultimately a bit too inconsistent to keep my attention beyond the writing of this review.

On the plus side, Cosmos jettisons here the awkward pop covers I found so grating last time around. Instead we are treated to an album of mostly Latvian tunes, some of which appear to be Christmas traditionals. The opener, a Latvian translation of Silent Night, is a lovely piece with an echoey, Gregorian feel. Aija, Ancit, Aija (Sleep Now, Little Boy, Sleep) is a New Age-y stunner with plaintive wails in minor keys all over the place. Cosmos has some of the most interesting sounds here that I've heard in a while.

Unfortunately there's also a lot of mediocre work to round it out, particularly in the latter half of the album. Ticu un viss follows its strong opening with a number of solid, if less interesting tracks that lilt and soothe — this is some good lullaby music indeed. It's too bad that the album's final third devolves into weak attempts to funkify with spoken word and wonky production effects. Cosmos has the pipes and the vision to create some really interesting work (as evidenced by the early tracks) and the last few tracks were a big letdown on that potential. Ticu un viss is a solid upgrade from Pa un par and my scores reflect it. But I think Cosmos is still a few steps away from the greatness that I glimpse fleetingly here.

I feel like a kid watching a fun new game from behind the fence when listening to Ticu un viss. I'm excited to play, but I can't get on the field and no one is telling me what the rules of the game are. That's not to say that Cosmos is heady and unapproachable; as a platinum-selling vocal group in Latvia they are entertaining, fun to listen to and sing in languages that I don't understand. Without a set of lyric translations with the album or on their website, I'm at a loss for most of the album.

Cosmos uses really interesting harmonies to start this Christmas album and continues the journey with continuously varying textures and moods ranging from solemn drones to a cynical old man walking through the snow to a Bobby McFerrin-esque rendition of We Wish You a Merry Christmas.

The first half of the album is a little slow due to the focus on soothing songs intended to calm the listener for Santa's visit, but it picks up later. This album would be better for me in a mixed playlist with other holiday albums since, unfortunately, my linguistic handicap dulls the overall effect of the album. This is also the reason I can't give the songs more than a "4", not because as a non-English speaking group they don't deserve a "5", but because I can't tell if the mood of the piece matches up with the message: I'm limited in my analysis.

Regardless of what language you speak, Ticu un viss convincingly establishes whatever mood it sets out to do with a little tongue in cheek fun on the side. Even if you don't speak the language, I recommend expanding your sonic palette and giving Cosmos a try.

To order this album, visit www.upe.lv.