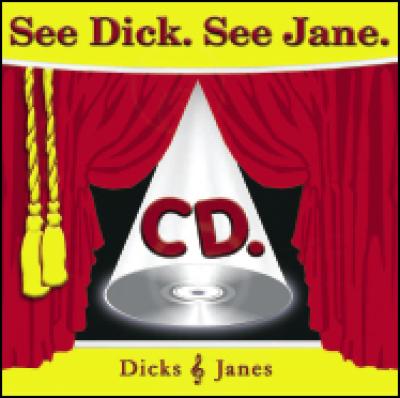 It's getting to be all about the blend with me, and I'm not really digging this one. See (CD?), the new Dicks and Janes album is pleasant, fairly energetic, not great and not awful, with ambitious percussion and a few interesting bits sprinkled here and there. A couple of computerized tracks at the end reach a higher level, which I think confirms my feeling that the blend is what pulls this record below others in its class. Here's how I'll try to explain it: the men are fuzzy, the women are strident and the combined sound is too theater-department for my overtired ears.

Does that help you make up your own mind? I get the sense this is a subjective album. The arrangements are kind of cute, and I think the mix of natural-sound and teched-up background fills is a nice touch. The tuning is decent, the soloists unarresting. The opening cut, Have You Met Miss Jones has a jazz-hands tinge about it that embodies their sound, on both ends of the spectrum. On the one hand, it's a practiced and fairly well-tuned sound that shows some personality and some artistic vision. On the other hand, it's a little grating. That may be my ears, not their voices, but that's the way it is and RARB readers are stuck with my opinion.

In a similar vein, I rather like the androgynous tenor of Show Me The Way but I don't feel the need to put the track in my daily rotation. And the percussion has a practiced flair (hard to do) but the beats mostly don't quite gel with the singers into a true groove. Promise was pleasant but dull, which could also be said of the well-performed Porcelain. As for repeat soloist Maria Spear, I preferred her upbeat and in-the-pocket I Wanna Dance With Somebody to the more technical Blues In The Night. The latter is all melisma, no color. Eva Cassidy had a gorgeous tone that kept her (excellent) technique from taking center stage, but that part of St. Eva's appeal gets lost in translation.

Porcelain is the most appealing of the official lineup, but the hidden track is my favorite number on the disk. Since I wasn't expecting it, I was quite distracted the first time it came up — didn't I hear this before? And why didn't I like it as much before? The remix makes Train Wreck sparkle and shows off the facets of the soloist's pleasantly un-Sarah McLachlan-like tone. Similar treatment could have done wonders for Love You Out Loud, which suffers from a hard-to-hear soloist and an insufficiently cleaned-up vocal guitar riff. I'm sure it was fun live, but an ambitious soprano glissando like that needs some computers to ease the transition to speakers. In contrast, the Porcelain vocalese is softer and more mellifluous.

So that's where it stands. If you do get this album, I recommend you transfer the last two tracks to your mp3 playlist and leave the rest in the archive. After all, why listen over and over to songs that don't connect?

It seems painfully obvious to say but as for See Dick. See Jane. CD. — I give it about a See. Ahem, a C.

This is something of a step backward for the Dicks & Janes from the University of Michigan who, unlike so many groups, save up their material and release a CD only once every few years. All the more disappointing, then, is this effort which falls just short in numerous categories and well short in others.

The talented voices are still there and pleasant enough to listen to, but with a few notable exceptions, they are put to use in repertoire, arrangements and a mix that doesn't show them off to the greatest advantage. Indeed, it was ironic for me to review this CD immediately after the Counterparts album because the two most enjoyable tracks on SDSJCD were the vocal jazz Have You Met Miss Jones, the CARA-nominated opening of the album, and Blues In The Night which arrives, with a killer CARA-runner up solo from Maria Spear, towards the end.

Sadly, everything else — save the BOCA 2004 Porcelain which sounds as though it was recorded by another group entirely — is really just OK material, arranged adequately and performed decently.

Consistently, the mix is a bit of a mush — I can't quite put my ear drum on precisely what it is, but so much of the background comes off muddled and there a moments where it literally sounds as though my headphones and speakers were under a pillow (I tried listening multiple times on multiple systems all with the same unhappy results).

Consistently, the D&J's get a little VP happy, spending a great deal of energy and sophistication on a complex VP track that is supporting a less than complex arrangement. Most bothersome is that they show a great willingness to use processed VP sounds and yet the chosen kick drum on most tracks is of the "dance beat" variety rather than the power-rock variety, the former being not nearly as effective as the latter might have been on tracks like I Wanna Dance With Somebody.

Consistently, the solos are just not quite up to their assignments, whether it's that they possess slightly too-trained voices (see unanimous comments in 2002 reviews) to effectively tackle songs that beg for a somewhat beltier, ballsier, meatier sound (see Hanginaround, Show Me The Way, Breathe et al), or their tuning gets a little sketchier in busier passages (see Love You Out Loud) or perhaps that the voice(s) is just a bad match for the material (see a very show-choir-y Dancing Queen, where you can almost hear the male soloist's over-concentration in trying to tune up his harmonies with his female counterpart).

Understand that this is not happy news to report, as I had high hopes for the Dicks & Janes — maybe I'll just chalk it up to a sophomore jinx and keep my fingers crossed for their next album. In the meantime, except for the most loyal of Wolverines, this CD, in the words of my 6th grade science report card, "needs improvement".

I have been waiting a long time for the University of Michigan's Dicks and Janes' follow-up to their stellar debut Show-N-Tell which was released back in '01-'02. They teased us with a track on BOCA 2004 (Porcelain), and a year later we still had not heard any news about their next album (and my e-mails and Instant Messages to friends in the group didn't provide any inside information either). It may have taken longer than we, and they, had hoped, but the second offering from the Midwest coeds has arrived, and it was well worth the wait.

With the release of See Dick. See Jane. CD. I can confidently say that the Dicks and Janes have leapfrogged Amazin' Blue as the top recording a cappella group from Ann Arbor, MI. Stellar soloists and intriguing arrangements fill the album, making it an utter joy to listen to. Every soloist is damn good, some downright exceptional. It's rare to find an album or group that has so many excellent soloists, especially from a campus with so many groups diluting the talent pool.

Train Wreck (as well as the hidden Train Wreck (Bonus Remix Track)) is my favorite track on the album, a Sarah McLachlan tune I had never heard before. Stephanie Fajuri provides one of those aforementioned brilliant lead vocals atop a finely put together arrangement from Christy Lombardi.

Others that caught my ear were the jazzy opener, Have You Met Miss Jones, which includes Ben Henri's great vocals and Roel van Lanen's fantastic arrangement; Eve 6's Promise, the one almost-rock track on the album that features a great baritone lead from Jason Mooney; and Porcelain, which if you haven't already heard on BOCA, is itself worth the price of the album.

It must also be noted that See Dick. See Jane. CD. is self-mixed by member-on-the-early-recorded-tracks-and-current-alum and fellow RARB reviewer Trey Harris (except for one track, Blues In The Night), who is now trying to break into the a cappella recording community following his relocation to Los Angeles. The mix on the album is superb; SoCal groups would do well to give him a shot, as Gabriel Mann's schedule is becoming more and more packed with his burgeoning solo career.

What most impresses me with this album is how it shows Dicks and Janes' growth. Recorded from 2002-2005, the worst tracks (if you can really call them that) are the two earliest recorded songs (Hanginaround and Dancing Queen). The semester in which each track was recorded is included in the liner notes, and if you put the songs in chronological order, the improvement is quite evident (the most recent recordings being Train Wreck and Promise). It's definitely a testament to their determination to continue to improve and not become complacent, as they have already appeared on BOCA three times.

See Dick. See Jane. CD. might not be the most imaginative title, but look past it (and the unattractive cover art) and you will find an a cappella gem.