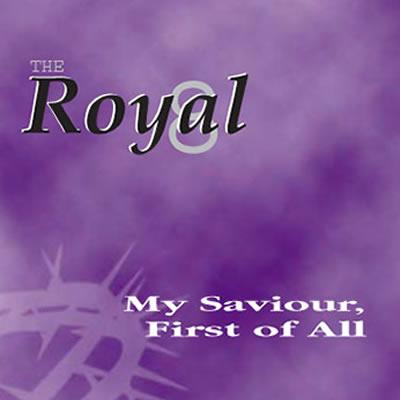 The Royal 8's debut album My Saviour, First Of All is a potent mix of tradition and innovation. On the old school side, we've got twelve Christian traditionals arranged in standard four-part harmony. In addition, all eight members are first, second, or third cousins through their great-great-grandmother Cora Royal DeGough. The old schtick of a family singing troupe always tugs at my heartstrings; I can't help it, I watched The Sound of Music too many times as a kid.

As for the innovation, the liner notes indicate a more interesting origin story than I think I've ever heard in my time at RARB: "After the funeral, a few family members suggested we make a CD". How ... interesting. Music arising from grief — what a story!

But what transpires on the album is all too familiar for a group with such humble beginnings, and I'm not talking about a nun-turned-nanny transforming a sad household of children into a crowd-pleasing, Nazi-escaping legend. The Royal 8 simply cannot sing. Or to be more precise, the Royal 8 can produce notes - they've just never met a chord they couldn't butcher. The main criteria separating the scores was whether the tuning was bad enough to make me wince, bad enough to make me wince continually, or bad enough to try opening the non-functioning windows in my 17th floor office to escape the agony. And as the scores will tell you, there were a lot of concerned colleagues outside my office when I listened to the album.

There's plenty else to nitpick, but not much reason to, since the majority of the tuning here is intolerable. Stick to the von Trapps for now and hope the Royal 8 step it up next time around.

The number one issue I have with the Royal 8's My Saviour, First Of All is that it never quite can decide if it's barbershop, gospel, or a little bit of everything. Now, I suppose that genre-bending is okay, but on this album, with a bit of unpolished tuning and a whole lot of God-praising, I'm not sure how to swing my review.

With the group's origins firmly grounded in family (they're all cousins) and the church, the music, to twist on McLuhan, is clearly much more about the message than the medium. There's lots of Jesus praising going on, and I imagine that I'd rather enjoy seeing the Royal 8 every Sunday morning at worship if I were so inclined. But this is a low budget, small town production rather than the bang-and-sparkle presentation you might expect at a mega-church. And with no info about the recording process, the arrangements, or any other details in the liner notes or defunct website, there's not much more to say about this squarely average disc.

Every song sounds exactly the same: four-part barbershop pieces with absolutely no use of dynamics, no change of tempo, and not quite centered pitches. (Note that the soloist score is pretty much irrelevant: there are practically zero solos in any of the songs, save for a few measures here and there.) They sound a little like the cute boys I remember from high school choir who tried to form an a cappella group to impress women, although these men seem quite serious about their music ministry. While they certainly won't be winning any SPEBSQSA competitions anytime soon, what I can hear in My Saviour, First Of All are the building blocks to learning the skills that could turn the Royal 8 into more well-rounded barbershop performers.

I'll admit, I'm a bit uncomfortable reviewing My Saviour, First Of All. The Royal Eight, comprised of eight cousins, wrote in their liner notes: "The Royal Eight first came together on October 30th, 1999 at the funeral of Flora 'Shorty' Stalcup. Flora's daughter, Lyndell Rowland, asked us to sing four songs in Flora's memory ... After the funeral, a few family members suggested we make a CD ... We had each of our mothers choose two of their favorite songs. We chose one song from each mother, added some of our own favorites, and included the four songs from the funeral to create our collection on this CD."

So you see, this is a highly personal album. It's rather difficult to critique an album that honors a deceased family member, since the gesture is so very kind and I just don't see the need to review this sort of tribute. But, if these cousins are going to keep singing together, I can certainly offer some advice to make their next work stronger.

It's said a lot in these parts, but a group really has to nail the basics before they make an album. If there are wrong notes everywhere, you're not ready to record yet, and there's a lot of wrong notes on My Saviour, First Of All. There's also a pretty big balance problem. While I appreciate the zealous high tenors, they've engaged in a shouting match on this album, completely overpowering everyone else. All the singers largely ignore dynamics, recording most of the songs at a forte from start to finish with very little expression. The tempo of many songs is the same, too, and delivered in a note, note, note, note fashion. Combine the static tempo with the pretty static track list of similar sounding pieces, and a distracted listener could mistake My Saviour, First Of All for a single 28-minute song instead of 12 short songs. The only change in sound comes in track seven, Out Where The Cool Breezes Blow, where the group decided to create an old-fashioned, 1930s radio-sounding introduction. Since this is the only production modification on the album, the change just sounds awkward.

My Saviour, First Of All is a very admirable project, but the music just isn't as nice as the cousins' hearts. Still, the Royal Eight should be proud of their family souvenir, and I hope that they sing together for the long haul.