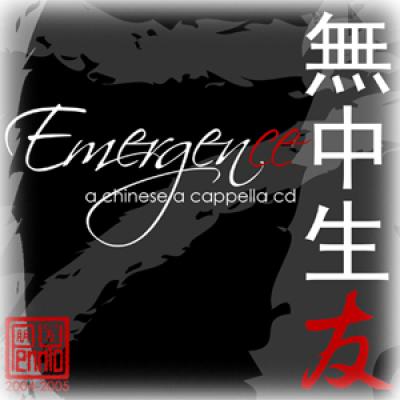 The last time you were in Asia, how did you feel about the pop music there? I was in Hong Kong last year and Japan a few years before, which I'm hoping will win me an "E" for effort as I try to explain Emergence across a cultural gap the size of the Pacific ocean. See, I've never liked what I think of as mainstream Chinese or Japanese or Korean pop music (as heard in hotel bars, restaurants and regular visits to the Korean grocery superstore up the street from my house). To make a broad generalization, I find it bland, tuneless and filled with synthesizers, like Western elevator music with lyrics. When I've seen translated song titles, they tend to confirm my suspicions that the masses are getting fed a bunch of banal platitudes, but maybe I've just never been exposed to the good stuff. There's certainly a lot of interesting East Asian traditional music, but (as with traditional music from this side of the Pacific) it doesn't seem to get much play.

So um, this group PennYo, they made an a cappella record of Chinese pop songs. It's mostly in Chinese (with a little bit of English and a hidden track recorded live, in a medley mix of English and, apparently, Japanese). That's the interesting part. These pop songs? Not so much. Lots of nice college kids singing a lot of transcribed synth lines, aided by some Casio-style percussion lines if it's an uptune or finger-snapping if it's not. A couple songs depart from this formula in favor of doo-wop, like the cheerfully out-of-tune Ai Bia Jia Eh Ngia, listed as a Taiwanese traditional piece, and the album opening Fei Ji Chang De 10:30. Oh, and track number 4 sounds like it was inspired by the Backstreet Boys (I'm not a big fan of them either). In general, the voices and the tuning are game but amateurish in the studio recordings. In the live recordings, the tuning falls apart like you'd expect but there's plenty of energy to tide the audience over.

There's one other notable departure from these trends — Wo Xi Huan, different from the others because it's excellent. The intro is tuned up, energetic and engagingly overproduced. Meng Maggie Shen's light solo floats over the new wave beat and beautifully colored arrangement. The whole thing is a perfect little pop song, in any language.

PennYo's liner notes are admirably free of much English info about the songs or the group, other than transliterated song titles and some generic thank yous. But the group thoughtfully included three movie clips that shed a little more light, once I found a computer that runs Quicktime. After watching those, I learned that Fei Ji Chang De 10:30 means "Airport at 10:30". And I learned that the group members come from numerous countries, as demonstrated in a pretty funny national anthem singoff. The Star-Spangled Banner and O Canada were easy to spot. I'm guessing the other two were from the country that the White House recently referred to as the Republic of China and the country that refers to itself as the Republic of China. Anyway, the videos are cute and so is the photo scrapbook.

Chinese is a cool-sounding language that we don't hear much of in these parts, which sets PennYo apart from the a cappella mainstream. But the singing and song appeal of this disc is decidedly average, so it probably won't find a big home outside the friends-and-family circuit. As for me, I wish PennYo a warm reception, along with some snappier repertoire for the next album.

Emergence is not at all what I was expecting. The album's jacket, with its flowery script and Chinese symbols, reads "a Chinese a cappella cd". It's understandable that I was eagerly anticipating traditional Chinese music, with its foreign modalities and alien instrumentation. Instead, I got, literally, "a Chinese a cappella cd". In other words, your typical American collegiate a cappella album, but sung mostly in Chinese. That's not to say that Penn Yo has China-fied My Chemical Romance or Evanescence. Emergence is mostly pop music from China that is sung in Chinese.

Penn Yo does not make a good host to the non-Chinese speaking listener. These Asian-Americans offer no translations, not even of the song titles. The liner notes only briefly explain that the group's members share an enthusiasm for Chinese pop music. Without actually playing the CD, the non-Chinese speaker really has no inkling that the album is not, in fact, traditional Chinese folk music.

Penn Yo includes three videos on this CD-Extra, one of which is entitled "Introduction to Emergence". Maybe this video offers needed context? Sadly, it's a baffling series of close-ups of young Asian people saying variations on "yo", none of which I understand. Probably 30 seconds of the nearly five minute "What is PennYo" video are subscripted in English, but the video is mostly people squeezing their faces and bonking people's heads into ceilings and singing six national anthems simultaneously and rehearsing in silly, off-tune, belty, unblendy fashion. I'm sure it was all in good fun for PennYo, but it wasn't for me. The videos are decently produced (except for some unintendedly obvious nostril breathing), but they only confirm that this album is not intended for me. Too often, on Emergence, we are left to fend for ourselves.

Chinese pop music sounds pretty similar to American pop music. The songs are either catchy and fun or catchy and melodramatic. Some of these songs are so remarkably similar to specific American pop songs that I found myself wondering if they were American songs that had been expatriated and heavily tweaked to work in the Chinese language. Fei Ji Chang De 10:30 sounded very much like Faith No More's Easy. Yue Ban Wan had a few moments similar to Sting's Fields of Gold. Dou Jiang You Tiao sounded eerily like Eric Clapton's Wonderful Tonight. Bewildering.

But ever since intonation become a religion, I usually find something to enjoy on an a cappella album. My weak lyric stomach remained calm, uncomprehending what are undoubtedly vapid, saccharine pop lyrics. I could focus instead on enjoying the hooks and catchy melodies. PennYo cleverly leverages its Chinese language syllables into its arrangements. Ye Tai Hei uses some "oo"s and "ah"s, but most of the background syllables are borrowed from Chinese. The various "sh"/"zh" of the Chinese "x" play off each other extremely well and liven up the choruses of Dou Jiang You Tiao. Wo Xi Huan is a moderately effected track and it's active background ("yao"-ing, "zhyow"-ing and "dah" ladies), cute-voiced soloist, and assertive vp are a highlight of Emergence. Using syllables from your own language may strike the Chinese arranger as an obvious move, but it appears creative to the uninitiated.

While Emergence is certainly without peer, PennYo is an ungracious host, intending the album for either an ultra-niche American market — or up to 1 billion Chinese. If PennYo is smart, they'll find a way to sell to China, cash in, and retire.

Writing for RARB, I get all CDs in all kinds of languages, from all types of cultures, and from places across the world. I've reviewed Swedish, Finnish, Polish, Spanish, Hebrew, etc. University of Pennsylvania's PennYo, specializing in Chinese a cappella, is the first I have reviewed of its ilk. Oftentimes, beautifully written and performed music will transcend language barriers to touch the listener. Unfortunately, Emergence doesn't fit this classification.

The musicality is pretty average. Parts are well blended and for the most part decently sung, though production seems a little too heavy handed to let the voices truly ring. This is especially true of the bass line. Soloists have their ups and downs. The group really seems to hit its stride in the two penultimate tracks, Wo Xi Huan and Lydia. There is a groove to these tracks missing from the rest of the album. In sum though, there's nothing spectacular.

The music, on the other hand, leaves much to be desired. On their own, the tracks chosen don't seem to be terribly interesting, though a few are somewhat catchy. One wouldn't know from the arrangements however, which are decidedly boring. Plenty of 'oohs' and 'yeahs', tons of block singing together at the same time, and a lack of rhythm make the tracks lifeless. When listened to, it sounds like a group of maybe seven or eight at the most. I was astounded to learn there are sixteen members.

In the end I had to ask myself, why was I sent this album? If one looks at the perspective of increased publicity, when making an album completely of Chinese a cappella I don't think there can be any delusions about the lack of wide appeal for your product. If the group is looking for constructive criticism and ways to grow, I guess first and foremost would be singing some tunes I would want to listen to. True, maybe I set the bar a little higher for niche groups. Yet I bet there's an unbelievably large canon of Chinese music that would be fantastic to listen to with the right performers. This synergy just didn't happen on Emergence.