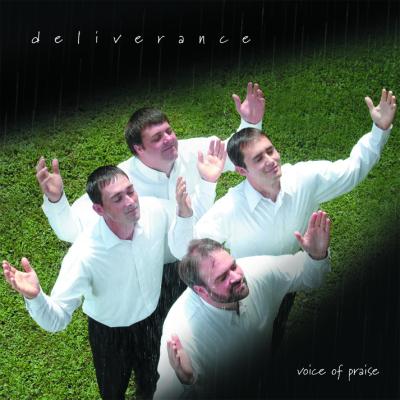 Another album from Voice of Praise and another polite compliment from me.

Actually, this review may be equally polite, but the compliment is not as strong this time around. Deliverance, the latest album or a cappella "ministry" from this all-male quartet is truly about as square as they come, with not even the the slightest hints of style and sophistication that were rare but present on their last album, Resting in His Grace.

The plusses are very straightforward: talented singers, singing in tune, with excellent phrasing and impeccable group diction, aided by first-rate production work in the studio.

The minuses are pretty much everything else. As noted by not just me on their last album, Deliverance has a sameness about it that just makes it dull. The arrangements are, with the rarest of exceptions, about as basic as they come, with voice leading and cadences that would make "predictable" seem like an understatement. Many of them are just unison singing with obvious harmonies and those that have a solo and "block" are strictly of the ooh-aah variety and of a complexity that few high schools these days would find daunting. The dynamic variations are virtually nil — almost everything is sung in a proud, reverent mezzo forte or forte that turns into a numbing drone after a while. And even the jauntier material — Didn't My Lord Deliver Daniel and Down By The Riverside as examples — has an energy that feels manufactured, undermined perhaps by the deeply profound respect that the performers have for the material that in turn prevents them from truly breaking loose and making the music as exciting for the listener to hear as it surely is for them to perform.

I have tinges of guilt feeling this negatively about an album of religious music turned in by four very talented singers who could probably do far more engaging work but for their dedication to their faith. But we know that religious music, especially of the modern variety need not be boring and monotonous (paging Take 6...). So if you haven't been to church in a while and are feeling guilty, perhaps this album might ease you back into it. But short of that, save your money for the collection plate instead.

There are a variety of words I can use to describe my reactions, both initial and enduring, to the all-male quartet Voice of Praise's latest release, and none would be positive: redundant, repetitive, boring, and most importantly cheesy.

There is little to like about this album. At first listen I almost had to chuckle. The first impressions I had — ridiculous use of stereo, sparkly production, almost inhumanly positive inflection, choice of arrangement — made me think this was a parody. I couldn't get the adjective cheesy from repeating in my mind.

The album amazes in its ability to maintain this interpretation throughout. Each piece, regardless of its origin, is performed exactly the same. Spirituals, old-time gospel, 20th century part song, Wesley hymns — there is no difference. It's uncanny that the group has found so many similar arrangements when they aren't done by members of the group and even more uncanny that they can perform everything in such a monotone. And sound so cheery doing it.

Ultimately, I feel they are doing a disservice to the message they are trying to convey. Some of these songs are deeply spiritual, indeed some of my favorites for conveying a sense of grace. But Voice of Praise so glosses over the deeper meaning of these songs with their unnuanced interpretation that there is no emotional impact. Their unfailing energy dampens my ability to experience. They seem to be cheerfully oblivious to what they are actually singing.

The album isn't all bad. The men can sing pretty well, with a decent sense of blend, vocal production, pitch, and other mechanics of singing. They obviously have the talent to make an album worth listening to. They have just chosen not to. With a little coaching they might stand a chance with their next effort. Until then, whether you are listening for the music or the message, save your money.

With Deliverance, Voice of Praise gives me my first follow-up album to review. I was eager to see if they built on what they did last time around, with Resting In His Grace — if they'd up the energy level, if they'd get more playful and creative with the old, overdone styles that they copied too much, in this reviewer's opinion.

But they didn't. Opening with Come Thou Fount Of Every Blessing was a good idea, as it exudes energy, and then We Pray To Thee, full of somber emotion, was a good follow-up.

But Voice of Praise falls right back into the same traps after this. Didn't My Lord Deliver Daniel sounds like it really wants to be energetic, but the guys don't show it. The excess of care they take with their rhythms and tuning just isn't conducive to the hopeful, joyful themes they explore in the album, yet it seems they can't break away.

Something that might help them is to work with an arranger who writes just for them, who knows how to point their talent in a direction that could exude energy in a recording session.

These guys are so good technically that I know there's hope for a joyous, loving album that exudes the religious emotions they're so proud to have. Deliverance is a small step forward, but they just don't have it yet.