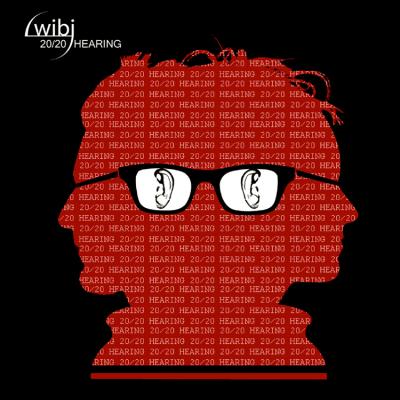 Here's to Wibi for a cool new album that sounds good, stays interesting and packs punch without hitting too hard. 20/20 Hearing has lots going on, but listening to it is a discovery, not an onslaught. Plus it's sort of cute and Canadian.

Here is the Joni Mitchell cover the a cappella world has been waiting for. Help Me is beautifully sung by Felicity Williams, with strong support from the arrangement and backing vox. By this point in the album, we've gotten hooked on Williams thanks to her lovely improv solo in the midst of Someone to Call My Lover. Vania Chan delivers that lead with just the right girlish touch, on top of Cory Knight's cool arrangement. I loved the textures he used on that track. Some of them made a repeat appearance on his arrangement No Such Thing, a simpler and less compelling performance than its predecessors.

Pop music is Wibi's guiding groove. But there is a great departure from all the cover tunes on Oblong, possibly the best collegiate composition I've heard in nearly 15 years of following the scene. It opens with a sequence of drum syllables from the ancient and intricate Indian tradition, followed by a straight-up pop-jazz instrumental. But it's vocal. And cool. Outside of Vox One, no one in the acappellaverse is doing anything like this — maybe Wibi will inspire a whole new direction for the community.

Wibi appears to be 100% strong singers, with a wide variety of arranging talent as well. They've also got a ringer. All the vocal percussion is provided by group member Garret Titus, who's been around on the Canadian scene for nearly a decade. He's clearly had time to get his head around vocal percussion in all of its forms, and he provides a great backbeat for each song without repeating himself too much. I was particularly struck by the dance beats in Heirloom (a cappella Bjork! Cool trance music, minus the original whininess!).

Overall, this is a darn cool album. I'd love to hear more.

20/20 Hearing is a strange mix of unpolished excellence. Rife with patches of ill tuning and shaggy blend, 20/20 Hearing could easily be dismissed as a product of less discriminating ears, but the album has long moments of brilliance and enough character to make it an engaging listen.

The album establishes dichotomy on its first track, One More Day. This vaguely Jamiroquai song begins with an impressively polished R&B intro using an artificial "wowow" syllable, record scratching, and a subhuman bass voice. An exceptionally smooth solo voice ushers in the song, accompanied by thumpy beatbox vp. Female R&B highlights swirl around his voice. All is proceeding in convincing style when the female chorus sings "one more day" and reveals gaping discrepancies. The singers don't attempt to align their entrances and cutoffs or to match tone or pronunciation. As the song grows more complex, adding in highlight lines that mimic solo lyrics, Wibi becomes less and less disciplined. The bridge "nah nah"s are just bad. At best, it's a bad arranging. At worst, it's lazy. All I want from this song is tight and smooth, and all I get is sloppy and rough.

Help Me showcases the very definition of atrocious blend. From the first entrance, we can hear distinct voices in the background, whose extended jazz chord indicates a need for a blended sound. Joni Mitchell or not, the syllables "bah bah" should almost always blend, unlike the jarring jostling of the women through each chorus. The background's singing of the "help me" lyrics are the epitome of pitch rubbing. The highest notes are clearly out of range. The entire song feels raw, and it rips my nerves every time I hear it. It's a travesty to waste the style and ethereal performance of this soloist, who claws at her notes with sublimity and soul.

The soloists on Butterflies and I Wanna Dance With Somebody are under the album's average. The Butterflies soloist evokes a sheep with his extremely tight and fast vibrato. The lyrics "Tonight, tonight! Uh! Uh!" take on a disturbingly barnyard meaning. I Wanna Dance With Somebody begins in high ‘80s style, with a taut drum kit and keyboard intro. Seconds later, the mood is shattered with an obviously flat solo entrance, and the soloist proceeds to sing chronically flat.

So how can a group that claims 20/20 hearing let problems like these go unfixed? And how can such a group create three such spectacular tracks as Sweet Ones, Heirloom, and Cigarettes & Chocolate Milk? These three tracks make 20/20 Hearing an important album to own. Each song is an ideal synthesis of soloist and arrangement.

Heirloom is equally phenomenal. I've yearned for years to hear an ambient a cappella Bjork cover, and it was worth the wait. Where Sweet Ones showcases a perfect soloist, Heirloom integrates the voice of Kat Yourkevich perfectly into its synthetic fabric. Kat's voice is a softened doppelganger of Jenny Lewis from indie mainstay Rilo Kiley; Kat has the kind of voice that hints at futile hope after years of sorrow. Coloring such an intensely human voice over the machinations of ticking and tocking vocal percussion, hissing steam pipes, and arctic chords suspended for eons is simply … indescribably … inspirational. And count on Bjork to infuse a song with eery imagery. This performance gets deep under my skin. It's one of the best a cappella performances I've ever heard.

The only substance on Earth smoother than the voice of the Cigarettes & Chocolate Milk soloist is his phrasing. Cory Knight has a silky baritone voice and gills. Or he must have gills, since he breathes less often than Frank Sinatra while keeping an astonishingly consistent tone. His vibrato unspins beautifully at the ends of phrases, which seem eternally liquid as they are supported by a loving female background. The group's choice of dark syllables and pure vowel sounds lends the song a truly chocolate milk creaminess. By the time Cory sings "so please be kind if I'm a mess", we're willing to forgive him any transgression.

What to think of 20/20 Hearing? I've got to chalk up the album's inconsistency to the fact that it was recorded by 29 singers over 3 years. With better precision in blend and tuning, most of the album could jump up a level. A charge to Wibi: you know what you did on the last three tracks? Always do that.

It absolutely astounds me that Wibi took the jazz out of their name, and subsequently, most of their music. Where In the Pocket (to date, my favorite album I've received to review for RARB) pushed the envelope infusing jazz and R&B even into the most mundane of alt/pop songs alongside a collection of amazingly complex and delightfully rare pieces, 20/20 Hearing is sadly a short step back for our friends up north at York University. It baffles me that this group, previously a pioneer in the recorded a cappella world in higher education, could put out something that now just sounds so... collegiate.

The soloists are no longer a highlight of the group. There are few standouts here; most are slightly above average, and two just blah. The best vocal leads include Tori Amos-esque (in a good way) Katelyn Vanier on Sweet Ones (random meme: original Sweet Ones artist Sarah Slean is a York grad... take that, Google!), sweet and convincing Felicity Williams on Help Me, and uber-sexy Cory Knight on Cigarettes & Chocolate Milk. I'll forgive Cory for creating such a sub-par, uninteresting arrangement of this particular piece (not to mention a hollow, standard arrangement of I Wanna Dance With Somebody) because I've been in love with his vocal performance since his first utterance of "If I could reach the stars..." in Change the World off In the Pocket. But I'm afraid that the leads on "I Wanna Dance" and Butterflies are below the high standard heard on the aforementioned better-quality tracks that they just drag the album down. Granted, she still sings better than I do, but the lead on the Whitney Houston track sounded to me like a cross between Cher and Tori Amos (in a bad way).

But the two pieces that keep 20/20 Hearing afloat, and leaps and bounds above anything one could call "collegiate", are the insanely creative ORIGINAL vocal jazz track Oblong (composed and arranged by Aaron Jensen) and the industrial/electronic Bjork song Heirloom, arranged by Kai Koschmider and expertly performed with Kat Yourkevich on solo. Together, these tracks exemplify the consistent (and persistent) advancement of possibility and vocal musical achievement that keeps Wibi at least two years ahead of the a cappella game, and without the help of a brand-name producer.

For me, listening to Heirloom is like hearing any version of Paranoid Android or the Dicks and Janes's BOCA 2005 Porcelain for the first time all over again. Heirloom's melodrama paired against the industrial percussion and understated yet highly engaging solo is a risky new a cappella experience that succeeds without ego or self-aggrandizement. And Oblong is simply remarkable. Utilizing the South Indian mouth drumming technique of solkattu to serve as an opening to the piece (written by Felicity Williams) is a move any ethnomusicologist would be proud of. In the manner of In the Pocket's Beyond the Limit and (even more so) Pinball Number Count, Jensen expresses a new sophistication in vocal jazz that even professional a cappella groups haven't even come close to.

The rest of the album is touch and go, and in all, a disappointment for a group that has pushed itself to the forefront of pioneering recorded collegiate a cappella. There are equal measures of R&B, jazz, and pop, but the merge of these genres is nowhere near as accessible as In the Pocket was to listeners. For what it is in full, 20/20 Hearing isn't a reinvention of the wheel, but those tracks that do go against tradition and upend the conventional idea of vocal jazz make this album worth the purchase.