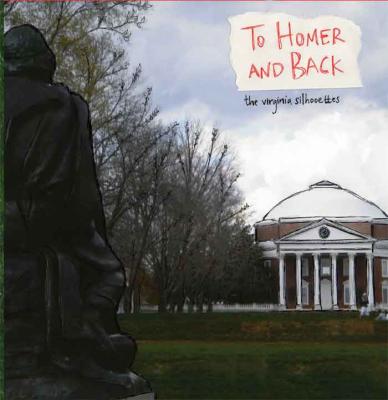 The Virginia Silhooettes would never streak across the Quad.

To Homer and Back, a reference to an alleged UVA campus tradition of wearing one's birthday suit to run a lap of the Quad, unveils solid performances from a body of talented, well-rounded singers. With just a few exceptions, the Silhooettes' singing and studio work are consistently strong across the album, leaving it one of the best all female, collegiate albums I've heard.

Yet the Virginia Silhooettes are holding back. To Homer and Back is (merely) a pretty darn good album. A group with the maturity to respect understatement and gifted with such beautiful voices and nuanced style should be able to let its hair down a tad.

That said, To Homer and Back is a really nice listen. After just a few tracks, the Silhooettes had earned my trust that they wouldn't subject me to anything less than perfectly tuned yet natural sounding intonation; smooth, womanly blend; and soloists well-matched to their songs. The soloists' voices are lovely, warm, and inviting with colorful and unique tone. These soloists sing with a nuance beyond their years, often showing a range of expression and tone that's impressively wide (Collide, Broken Wing, All Cried Out).

Lush, womanly background voices complement the soloists gracefully, sometimes with distinct yet pleasing voices, usually with a sublime blend. The vocal percussion is outstanding and works nicely with a thumpy yet natural sounding bass line. Yes, Virginia, women can do percussion and bass better than the boys (Thriller, All Cried Out). The group has woven together these elements in engaging arrangements that stay fresh and consistently drive songs forward.

Despite the maturity of the singing and the beauty of the soloists, To Homer and Back left me craving a little more feeling or some pieces of raw singing to chew on. The solos are scrubbed to a shiny polish in the studio, but pieces of honesty are washed away with the grit. Beautiful Life is heavily compressed and auto-tuned to achieve the artificial feel of the original vacuous Ace of Base song. I'd prefer to hear this song reflect the cold desperation in the eyes of those I've seen dancing to it in clubs; the soloist should sound as if she's struggling to convince herself that it is, in fact, a beautiful life. Instead, the solo mostly mimics the feelingless, mechanical singing of the original.

Though the soloist has vastly more expression than the deadpan Jem on They, I still think the song has quite a bit of room left for emotion, for real sympathy during the apologies, "I'm sorry we live like this", and for desperation in the chorus. I miss the frenetic paranoia that should color a song that asks "Who are they? Where are they? How do they possibly know all of this?".

Open Arms needs to wail like the original, not croon like Mariah Carey. The song becomes a chick ballad instead of the rock ballad Journey created, leaving it feeling a little limp. Worse yet, I think the soloist has a lot of power held in check; she could rock out but sticks with her chicks instead. I got a little bored.

On Thriller, we get courtroom-appearance-Michael instead of leather-clad-street-tough-in-a-parking-garage-Michael. The song doesn't live up to the freaky energy of its intro, keeping a steady level of energy rather than building more intensity and fear in the second verse. The soloist's voice is just beautiful, warmed with color all over her range, but she and the group don't explode into the chorus and no one sounds like they are "fighting for their lives".

But some of the grit remains. On Beautiful Life, the soloist's voice goes ragged on the way up to the top "whoa oh"s. The effect is endearing, like the jagged edged voice of a tomboy cartoon on Saturday morning. I love a cappella moments like this, when we get to hear some human character poking through.

To Homer and Back is a little too tastefully understated. But sometimes it's the women who leave you wanting more that you end up wanting most.

As a whole, To Homer and Back shows little improvement over the UVA Sils' last release, Tangled, which left a strong imprint on my memory as one of the finer women's albums in recent history. The songs appearing here have none of the Signed, Sealed, Delivered staleness made painfully present on a significant part of Tangled. But for the progress that Homer makes for these talented women, it pays the price in homogenization: an album with like-sounding songs and average soloists, save for the rare few who epitomize excellence.

One look at the liner notes and it's easy to see why so much of Homer sounds the same: a full 11 of the 12 tracks found here are arranged by the same woman. And while Kelli Harris certainly has some impressive skills, these songs are too easily confused for one another in a pattern easily distinguished by the listener by the third song: use various syllables to establish the song's intro and lead into a layering of simple bass, place in a few gals singing on "ah" or "oh" to create a chord progression, and toss in a sprinkle of j syllables ("jun", "jin", "jo", etc.) to design a rhythm.

And because each song seems like a repeat of the one before, it takes a stellar soloist to carry the piece through. Standing out heads above the rest are the rare few who catch the ear and really make the listener pay attention. These include Anne Foster, who should really just graduate UVA and follow Martina McBride on tour should the famed country singer get laryngitis. Broken Wing is a knock-out encore to her BOCA 2005 appearance with McBride's Where Would You Be. I also found Anna Lee's lead on Time a powerful and convincing execution.

The arrangement of Journey's Open Arms provides a most suitable background for soloist Melody Akhavan. This almost-R&B interpretation takes the '80s rock ballad to a new level with a swelling — and compelling — arrangement that takes full advantage of Melody's talents. I'm disappointed to see that Open Arms was listed as "originally performed by Mariah Carey", which leads me to believe that Harris' creativity is not as extensive as I might have originally thought.

Concluding the album with Thriller was rather anticlimactic. With a lousy door slam (though realistic door creak) and no real power vocals to interpret the theme, Homer concludes with a whimper. It's puzzling to hear such a run of the mill release with all of the good stuff I've heard previously. The Sils' reputation isn't enough to forgive the simplicity and patented arrangement style of the music; Homer offers no real challenges to the a cappella repertoire. Chalk it up to maturity or comfort. It's my hope that the next few years' crop of Sils girls deliver the promise made by Tangled.

The Virginia Sil'hooettes have released an album that is fun and well conceived, but falls just short of being a real knockout.

To Homer and Back comfortably straddles the line between representing a live performance, with warm and organic timbres, and creating a fantasy group, with overdubs and processed percussion. Not only do the Sils skillfully balance studio effects and organic textures, their arrangements juggle a healthy variety of inert and moving musical ideas. There is a solid foundation here among strong soloists, interesting ostinatos and creative harmonies. Moments like Carolina Pinto's lead in All Cried Out, the "yeah" at the beginning of Collide (probably the most honest sounding "yeah" I've heard yet), the swirling harmonies of Let Go, the track They, and the subtle but driving percussion of Time made me enjoy listening to the album again and again.

The album is in no way mediocre, but it leaves me somewhat placid due to the song choices. Most of the tracks are smooth and flowing, and with the exception of They, the intensity of the album doesn't kick past second gear. "Homer" is book-ended by what should be two high energy crowd pleasers, and while I enjoyed the tone colors and textures used in each song, I wasn't convinced how beautiful this life is and I wasn't thrilled by images of funky dancing horror movie characters.

The Sil'hooettes put forth a nice addition to anyone's collection. I'm just not sure that I would run To Homer and Back to get a copy.