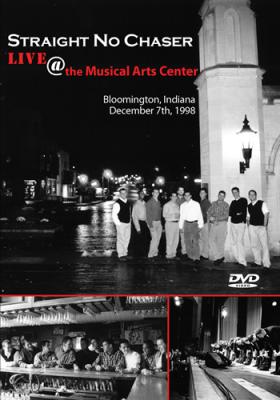 Straight No Chaser is in a league of its own with this DVD release, a full-length concert accompanied by literally hours of video skits, outtakes and footage from other concerts. It lovingly archives the adventures of a very talented group of college students and a two-year old a cappella group. For what it is, it's quite good. But also overwhelming — I recommend against watching it all in one setting, as I did for this review.

Straight No Chaser friends, family and fans will adore this disc for its glowing reminiscences. It also goes over with a more-or-less outsider like me, but at least I was familiar with the group and their sound from those days. I doubt this project will catch on with anyone brand new, unless they are forming an a cappella group themselves and looking all over for inspiration. If so, they've got a hard act to follow — very few of us can rustle up such talented musicians and such compatible personalities on demand. I know from experience just how hard this is, having founded a collegiate group myself way back in 1992. (With my friend Amie — hi Amie!) Miraculously that group still exists today, having survived my amateur arranging efforts and several rounds of vicious infighting. But our reality was considerably less photogenic than the good men of Straight No Chaser.

In this disc's main event — the 1998 Pearl Harbor Day concert — the singing is excellent and the sound remarkably decent for a live recording. Plus the boys can dance, and they have the good sense to keep stage shtick to a minimum. Patter is fairly entertaining when it occurs, and it beautifully sets up my favorite joke of the whole disc, the Hannukah-Kwanzaa-Christmas punchline. Toto never sounded so good, or so well placed.

This Is How We Do It is at least as good as Last Call fans remember. It's terrific every time it appears, with a great-sounding arrangement and a fabulous solo. Worlds Apart is the other truly standout performance, halfway through Act 2 of the main event. It's a beautiful song and a worthy rendition, giving musical director Daniel Ponce a well-earned chance to relish the fruits of his labor. The rest of the songs are all creditable performances, despite the many and varied pecadilloes of live sound. Thankfully, the tuning in the concert is considerably better than the music used for the introductory montage.

I feel like I should say a few words about the bonus tracks and outtakes, since I spent two hours watching them. Some of them are funny (the bathroom dance routine to What Is Love springs to mind), some are gross (the Mentos bit) and all of them show a dedicated group of folks trying awfully hard to make something of themselves. By and large, they do. Here's to Straight No Chaser for archiving their own form of a cappella utopia and having the guts to show it to the outside world.

Straight No Chaser's Live at the Musical Arts Center is a gem studded time capsule. It begins with a sold out '98 show at Indiana University's Musical Arts Center and with truly copious bonus footage and funny outtakes, it leads us through to the SNC of 2003. Despite tuxedo uniforms, the fashions, songs and humor of the millennial end come in full force. SNC and video producer Randy Stine have put together something approaching four hours of concerts, spoofs and genuinely touching commentary by group members. At first blush this might seem like an insiders-only situation, the group members and maybe some IU students. But for anyone who's ever been in an a cappella group, and especially those who've been in an all-male group, you'll identify with the goofy, testosterone-filled and ineffably sweet camaraderie of both the concerts and the short comedic films. You'll get the jokes. And somehow you'll know these singers; they're the College You.

The main concert itself is all good, solid singing. But of course being 8 years old, it's more than a little dated. Insomniac, The Lion Sleeps Tonight, Hi De Ho, Superstition, I Wanna Be Like You... You get the (dusty) picture. The live audio by Airtime Studios isn't pristine, but it is clean and natural, adorned with only the hall's reverb and thunderous applause of the IU students. I wouldn't be surprised if whatever was sung was recorded without any remixing at all. But because the ubiquitous SM58 is a forgiving mic and because the live energy and ambiance dominate, this never becomes an issue.

What makes the DVD time travel back to life is the fact that on top of the good and sometimes excellent singing, the DVD is overflowing with personality. We begin to get to know our heroes warming up backstage before their big gig. Are the CDs selling? This part starts on beat four. Man, I'm so thankful to be here. We see them surprise their musical director with a sneak attack Happy Birthday. We laugh at the faux lonely Jew bemoaning their Christmas selections and the faux angry African American bemoaning the lack of Kwanzaa songs. Seniors talk about returning next year and note their parents' failure to laugh. And when we finally get to the spoof videos, it's hysterical. This is a group that puts serious time in to their comedy. And with a deft hand, it's all edited together at a nearly broadcast pace.

There's something universal and transcendent about the relationships between these guys. There is a moment when imperfections can become perfection. In the right light, SNC does just that.

When was the last time you were totally entertained for four and a half hours? Live at the Musical Arts Center is half concert, half bonus video, and 100% entertaining. I hit "play" on this surround sound DVD at 8 p.m. and didn’t stop watching until the last video credit scrolled by, well after midnight.

The video production gives the feeling that we’re peering into a history-making moment. Through onscreen text, we learn that this show is the first to sully this venue’s 28-year history with a performance by a group not formally affiliated with Indiana University’s College of Music. During backstage video taken 20 minutes before curtain call, we see a nervous group, fidgeting, talking over each other, doing some cursory run-throughs. The audio is overlaid with video of a busy lobby and a packed auditorium; we learn that all 1,400 seats are sold out. Any alum of college a cappella can relate strongly to the charged atmosphere, to the pre-show backstage pep-talk huddle. The video feels like an unpolished documentary but the uncanny similarity to my college a cappella experience gave me chills.

And this is half the magic of Live at the Musical Arts Center. Straight No Chaser possesses a magical relatability. What could easily have been a dated yearbook album full of ancient inside jokes and cobwebbed "you had to be there"s instead draws us into a special moment for Straight No Chaser, into sweet, hilarious reminiscince of our own college a cappella experience and of the human bonds that draw a cappella alumni back to singing.

LMAC does what live shows do best – it gives chills. Song after song, we witness soloists blossoming and offering forth a piece of themselves to each person in the audience. Sometimes fearless, sometimes meek, each soloist fills the auditorium with emotions poured from their hands, their mouths, their eyes, their shoulders. A typical studio album feels guarded in comparison, with singers complacently safe behind multiple takes and the veneer of studio polish. Yes, the background singing suffers slightly from some of the typical blend and pitch inaccuracies of a live performance, but the group so strongly pulled me into its energetic performances that I didn’t mind.

And this is the other half of the DVD’s magic. With the visual communication of body language and the context of inter-song banter, live performances allow audiences to come to know a group and its personality in a way that typical studio albums can’t. The guys of Straight No Chaser are authentic and genuine. They lay it all out there without pretense. It doesn’t hurt that nearly every soloist has a gorgeous voice with a strong sense of style. Early in the pre-show backstage video, I rolled my eyes at the clichéd melodrama. But once the show was over, I heard myself say out loud, “It’s really cool that they made this DVD.” LMAC was, in fact, a momentous occasion for the group, its audience, and even me, eight years later.

You just can’t help but like Straight No Chaser, and their likeability reaches new heights during the “bonus video”. There is nothing “bonus” about the bonus video; it’s a standalone feature of the DVD and sets an unreachably high standard for others. As lengthy as the concert, the video segments require no special insider knowledge of Straight No Chaser or Indiana University and rank as the most thoughtful, clever, and funniest college humor I’ve seen. I’ll be forcing several friends to watch it, knowing they’ll end up in tears as I did. Randy Stine, an SNC album, produced all the video, and the editing and transition effects are worthy of network television. Segments like SNC Behind the Music, SNC Cribs, and American Idol look as good as their inspirations but are infinitely more entertaining. Three of the four videos have their own fully sound tracked and laugh tracked outtakes.

Strange as it may seem, I recommend buying this eight year old concert, particularly if you remember collegiate a cappella in the ‘90s. Straight No Chaser reveals itself to be a thoroughly enjoyable group, entertaining both on the stage and behind the lens.

In 1998 SNC performed a concert in IU's Musical Arts Center, and hired a three-person professional camera crew to shoot the concert. The company ended up going out of business, and the footage was thought lost until 2006. The former owner of the company found Randy Stine (one of the original SNC members) and mailed him the tapes, who then created a full DVD of this concert. The end result is a nice retrospective on the start of Straight No Chaser, with the original members, singing 22 songs at one of their first headlining shows. There are also two hours of "bonus" footage, featuring other concerts, backstage footage, and comedic videos shown at concerts. Each DVD contains nearly four hours of content. The DVD will be available for sale on the IU Alumni Association website and at A-cappella.com.