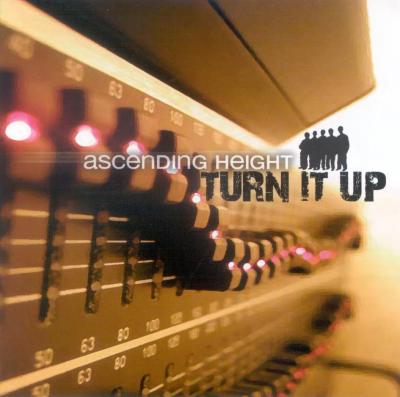 Six tracks. All original. All penned or co-penned by singer/producer/arranger/tracking engineer Robert Dietz. Dietz's inventive arrangements thrive under Tat Tong's clever electronic textures. Melodies are one part rock and one part boy band, sometimes catchy, rarely cliched. VP is tight, pasted, sliced and diced and all originally spewed from Dietz. Unexpected layers of effect and arrangement make Turn It Up the most listenable high school release on the market today. It's an incredible achievement.

Only the tone color of these young leads reveals that this is a high school release at all. Only the best collegiate groups can compete with Ascending Height's production and arranging and I can't think of even a handful that try to compete with the writing. Had the leads not been so obviously young, I believe many of the high 4s would have crested to 5s.

Whether by Dietz or Tong, any pitch or rhythm flaws have been corrected, possibly over-corrected. Sweet Dreams, a lush ballad with a rare bass solo, is particularly troubled by this problem. While the background over-correction is somewhat tolerable, the lead's artificiality is disconcerting. Predictably, the more electronic the song, the more natural the "enhancements" sound. This is an extremely common critique and could easily be directed at many singers on the radio today. Of course, in the realm of a cappella these choices are always more exposed and so may not always work as well. Between the choices of over correction or under correction, I have to agree that over is the preferred error.

I can listen to these songs repeatedly. That's actually a big deal. There are a few lyrics that could have been more artfully paired, a few melodies that could have cadenced more gracefully. But this is a CD of memorable, meaningful musical moments. This kind critique is the same recently given to Take 6. That's just unheard of at the high school level.

Bottom line, Turn It Up is an upbeat, interesting collection of songs with real depth, an unbelievable achievement in high school a cappella and well worth owning.

Most groups composed entirely of singers under the age of eighteen could aspire to "pretty good for a high school group" as a lofty but worthy aspiration. With their latest and last album, five-man vocal band Ascending Height blows through that milestone to nip at the heels of their collegiate and professional brethren, and maybe even rip off a pants leg or too. But what exactly turned the capable but meek puppies of If This Is Right into the confident pack that barks out Turn It Up?

Firstly, Tat Tong took much more poetic license in the studio, eschewing any vestiges of the group's previously more naturalistic approach. Tong's polishing really highlights the generally excellent singing and smooths over the inevitable wrinkles that come with such young voices. His efforts culminate with his remix of Mind Burn, transforming this previously plinky tune into a pulsating dance song. Mind Burn (2006 Remix) sounds like the engineer pushed the button for just about every effect available, and yet remains a cohesive and engaging track. Studio magic indeed.

Secondly, Robert Dietz turns up the creativity dial by contributing four originals and co-writing a fifth (out of six tracks!) Dietz's smart lyrics and catchy melodies belie his age; I'd listen to most of these tunes over much of the sludge that qualifies as radio singles nowadays. And the arranging here is on par with the best work I've heard in the collegiate world. The moody falsetto chords on Breaking The Silence haunt the listener before opening up into jagged, Off the Beatish choruses. 500 Words uses jungly percussion and interplaying voices to create a wonderfully textured piece that explodes into a kaleidoscope of harmony in the closing refrains. Damn, this kid is good — Dietz has a great music career ahead of him if he wants it.

Of course even the most precocious of youngsters have their weaknesses, and Ascending Height do stumble here and there. But somehow the enthusiasm exploding from the earphones let you forget the sometimes tinny solo work and the occasional blips up high. It's a shame we won't see the continued evolution of this group, which will disband as most of the members move on to college this fall. But they'll undoubtedly be welcomed into the pack at their new alma maters, and I suspect there's a good chance we'll be hearing from these alpha dogs for years to come.

Deliciously derivative! In my mind those two words sum up an incredible album by the wunkerkind Robert Dietz and the mighty performers who make up Ascending Height. I'll get back to my opening comment in a minute. But can it really be possible that these boys formed a group a scant three years ago, released a stunning debut a year ago and given the a cappella world the amazing disc Turn It Up in May? Even more startling is that they've now disbanded. The horror!

Now, why compliment the group with a phrase like "deliciously derivative?" Because arranger and lyricist Dietz and guest composer Abel McSurely Bradshaw have taken elements of some of the best groups recording today and created a sonic palette that is decidedly all their own. I could hear remnants of The Magnets, baSix, The Flying Pickets, Duwende, Ball in the House, The House Jacks, Off the Beat and The Bubs emanating from my speakers at any given point in time. In fact, I would strongly suggest that those groups consider hiring the guys to craft some new songs for them. There will be no disappointments.

The background music is incredible — music theory classes in Ithaca must be out of this world. The guys have a blend when singing backup that lets you know that they've grown as musicians and have a freedom of sound that comes from singing together and understanding each others' gifts. The use of syllables is spot on and very creative. The lyrics have a strong pop sensibility without being trite or too clichéd.

I am in love with Dietz' and Crawford Doran's voices. Though he does some incredibly ill-advised screaming on Step, Dietz concocts a sublime serving of pop and rock on Setup for the Fall. Doran's booming bass is like melted honey butter on a cinnamon bagel when he takes the lead on Sweet Dreams — a delicious confection indeed. Joey Golinker has the makings of a smooth balladeer. Alex Ainslie and Ernie Fontes have matured their solo voices well.

Actually, the screaming by Fontes and Dietz on Step keeps it from being a blue-plate-special. The guys all want to be rock tenors, and while showing off upper ranges works every once in a while, after about two minutes of it, I was bored and irritated.

Did I mention these were all original songs? That these guys just finished high school in the summer of 2006? That they are ready to become the leaders of collegiate a cappella? That this album is a must have?