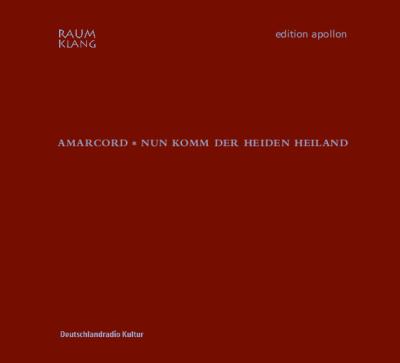 This is the music that starts to crowd public radio airwaves around Dec. 23. As the Western world slows down for what has become a national day of rest, the classical music stations abandon their usual reticence toward vocal music and trot out medieval and Renaissance classics. Many people remember this music by its mood, not by its tune. The open harmonies and unencumbered vocal textures bring peace.

The casual listener isn't familiar with repertoire or artists, they just remember that mood and wonder where it comes from. Look no further. If that cozy image resonates with you, this is a record you will surely want to own. The singers of Ensemble Amarcord are exceptional choral singers and musicians. Their voices come together in blended unison, then split into elegant counterpoint. On this record, much of the music reverberates as it might in a church. This sound gives a mystic feeling to the slower numbers, while adding a startling edge to faster pieces like the album-opening Alle, psallite cum luya.

Amarcord's voices are lovely, from the resonant bass to the clear countertenors. I also think it helps that they are German. I have sung most of this music in my own early music adventures. American and English choirs can sing very well, but there's something special about the intonation of native German speakers on pieces written by Germans. Whether in Latin or medieval vernacular, Amarcord's singers seem to have an excellent feel for how to push or stretch the music to its fullest.

So much of this is iconic. Es ist ein Ros entsprungen and In dulci jubilo are the most familiar to an American audience (the latter was immortalized by Bach and also turns up as the melody to the English carol Good Christian Men Rejoice). Amarcord also offers an expressive version of the common processional Angelus ad Virginem, and the album is interspersed with verses from the classic Nun komm der Heiden Heiland. Meanwhile, Stella Splendens shows off the drone textures of the Middle Ages, while Pastores loquebantur inter se shows the meter changes so often found in this work. Other joys await — I was particularly taken with the Magnificat sexti toni by 16th century composer Jacobus Vaet.

If you have high standards for classical Christmas music, this album will meet them. It's a great addition to anyone's holiday collection.

Ensemble Amarcord's Nun komm der Heiden Heiland (Savior of the gentiles, come) is a collection of sacred Christian works spanning a stunning 1,250 years. Described as "lively" by the ensemble itself, the music is probably more likely described as soothing. Pop-instructed ears may initially miss the drum and bass, but listeners will find these tracks resonantly textured and beautifully phrased with a uniformly reverberant, natural production.

Solos are rare, but compelling in their brief glimpses. Ensemble work, which makes up nearly all of the album, is breathtaking. Where lesser groups strive to match vowels and obey dynamic markings, Ensemble Amarcord is actively engaged in a kind of telepathic link. This is a link born not only of obvious rehearsal but also of the enlightened artistic sensitivity of more than a decade of stable membership. It may be clichéd to describe it as such, but Amarchord truly sings as one voice.

While I found nearly all the material beautiful, it is the sustained pedal tones, overtones and naturally generated subharmonics found in such tracks as Stella Splendens and O viridissima virga that made the hair on my arms stand on end. Sometimes the single note can be the most powerful.

Despite the fact that the material of Nun komm der Heiden Heiland covers a truly vast time period, the album manages a surprising cohesion. Thanks go to excellent selection of material as well as a choice to keep tone colors and phrasing unified.

Nun komm der Heiden Heiland is a sure delight for fans of sacred small ensemble music and this release from the award-winning ensemble comes highly recommended.

Ensemble Amarcord is back and better than ever with its latest. With a title from one of the most famous lines in the musical canon, "Nun Komm Der Heiden Heiland", the album had me envisioning celestial hosannas before even opening the disc. I was not disappointed.

While the liner notes do an excellent job tying the selections together, this disc is a hodgepodge of early Christian music and religious works by contemporary composers. Selections are very traditional, including early cantus/chorus combinations, polyphony, and newer works that tend toward the folk tradition. There's nothing very modern about this disc; it would make a great repertoire for an Evensong or Vespers service.

Amarcord is in typical form. As usual, musicality is impeccable. Tuning is dead on. Tone is splendid, blend even better than their last effort. It's clear by the performance the group's roots are in early music, and the selections sparkle for the listener. Amarcord demonstrates an exceptional understand of both chant and polyphony. My favorite track is the Magnificat sexti toni by the sixteenth century composer Jacobus Vaet, which alternates between chant and polyphony in the traditional fashion. The sanctity of the service is palpable as the music is expertly presented.

This album is fantastic, and there isn't much to critique. As stated, musicality is excellent. Despite this, I never got the feeling the disc or the individual tracks ever climaxed. The ensemble would almost get there, but it seemed they were still holding something back; the sound blossoming was never complete. I kept waiting for the moment Amarcord would let everything fly but never found it. Despite this, the energy and concentration is amazing.

To be honest, I wasn't familiar with most of these composers before this disc. The heavy use of perfect fourths is highly suggestive of early Roman music, but the prevalence of pedal tones also lent a distinctive Orthodox flair to the album. Personally I didn't care for some of the tracks — I think the writing was a bit boring. But in the capable hands of Amarcord, this disc kept my attention for the full sixty minutes.

Amarcord long ago vaulted itself into the ranks of the world's most exclusive small voice ensembles. Nun Komm Der Heiden Heiland will only further cement its place. For fans — even for those classical-phobes who only listen to pop — this album will provide wonderful moments of insight and enjoyment.