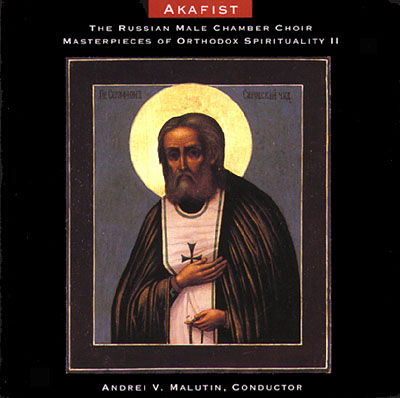 Akafist. With a name like Akafist, don't go thinking that this is some heavy metal a cappella group. This is a really good Russian ensemble performing orthodox sacred music. This is also an outstanding album. Now it's true, this is not the usual kind of music that we RARB'ites usually get in our mailbox, but we are not complaining, I think (but I don't want to speak for the others!).

There is not much to say about this album. It is excellent. It is well-recorded, impeccably sung, and there is interesting content (if you are looking for Russian orthodox spirituals, that is).

The lyrics seemed a bit dry and uninteresting... but then again they were all in languages that I do not know, so that might have made it a bit hard to get into them. What can I say? Russian just never did it for me.

But wait! Lo and behold, they have the English translations in the booklet! How helpful. (The lyrics are still pretty dry, in my opinion... but they seem spicy in the religious realm...)

Akafist delivers a powerful all male classical choral sound from first to last on their album Masterpieces of Orthodox Spirituality II. There are no surprising artistic choices, no new approach to singing or strange noises. The values of contemporary a cappella are not to be found here. This is simply a chorus of excellent voices applied to beautiful sacred compositions.

If you are unaccustomed to Russian choral traditions, then you may be surprised by the richness of the voices, the wide vocal range employed and the sometimes testosterone-driven tone colors. If you are familiar with Russian choral music then the ensemble will be a good one. The countertenor sound is stunning in its pureness and the contrabass (extremely low bass part) is like a distant thunder. I only wish the bass were a shade louder, but I fear that desire is the result of training my ear to a more contemporary taste.

Without knowing the Russian, Greek, Latin and Slavonic languages that comprise the album, it is difficult to properly evaluate line and text painting. The task is not made easier by the lack of side by side translations next to phonetics. This may hinder the monoglot reviewer, but the English translations will do just fine for the average listener.

If you perked up at the title, you probably won't be disappointed. This album sounded almost exactly the way I expected it to: powerful voices, sacred literature, dynamic range and relatively good blend and intonation.

This is a very different kind of recording from the majority of the albums I tend to review... but at least this one's not eclectic. =) (Sorry, but after reviewing 3-4 eclectic albums out of the last six or so, it was time for a change.)

Akafist is apparently a choir from Russia specializing in the music of the Russian Orthodox Church. This album was recorded live as part of an American tour. The music is all by Russian composers, all sacred. In short, this album is either your cup of tea or it isn't... it's very hard to find a middle ground here.

The music is all sung in Russian, but liner notes and translations are provided. The sound is Russian, from the fullness of the choir as it sings with the power and force you would expect a lot of men to produce, right down to the soloists. The music itself is very beautiful, very haunting. The soloists do a fine job of continuing to lay down the mood that the rest of the piece does. Their dynamic contrast in specific, from their quiets to their REALLY REALLY LOUDS, is particularly impressive. In totality, a very beautiful album that a very specific set of people will enjoy.

And herein lies the rub: The repeat listenability score only really applies if you like this kind of music. For the average a cappella fan who got into a cappella listening to Rockapella, the Bobs, or Vox One... I dare say, even the Kings Singers... may not like this. Technically, this is an a cappella album, as no instruments are on here (and in that definition, more "a cappella" than some albums I've reviewed), but this is by no means a vocal band, and people interested in this album should realize this. However, if you are a fan of beautifully sung choral music, and/or have a great affinity for the Russian style of competition, then this would be a good buy for you.

The Russian Male Chamber Choir is evidently a group of professional singers with the power to move their audiences; 17 men sound like a chorus of 50 with their huge, operatic voices and careful attention to diction. The CD is a compilation of orthodox music sung in Russian (with the exception of the first track in Greek, Latin, and Slavonic). The beauty of the CD comes from the solo voices on each track particularly the high tenors that solo and seem to soar over the rich sounds of the choir. What I feel is missing, however, is the blend between soloist and choir, as if the two are singing as separate entities.

Many CDs reviewed by RARB are collegiate, and a criticism I tend to have is that groups do not do enough with dynamics. "Louder is better" is not a belief that I have, and this choir shows a great depth of control with the quietest repetitions and/or loud triumphant chants.

Occasionally, the professionally trained voices seem to be 17 soloists. This is heard through a lack of similarly formed vowels, vibratos that stick out once in a while, and a mismatch of tone quality between the tenors and basses. (The basses sound much richer which is natural, but the tenors could darken their vowels to more closely match the basses.)

I tend to like the tracks that are more melodic, a bit more haunting than the full chorus sound that almost overpowers my stereo. (Another problem, you will constantly adjust the volume on this CD). Tracks 5 and 6 are beautiful.

This is a professional choir with an absolutely professional sound. The recording quality probably is a result of singing in a church, with lofty acoustics and lots of resonating high and low tones. What I would have liked to have seen with this CD, mostly because it is a genre less familiar to me, is program notes that tell in layman's terms what you are listening to, a brief history of the choir, and what other genres they may delve into.

The Russian Male Chamber Chorus has produced an album of substantial sound, impeccable musicality and striking spirituality. Through the twenty tracks on this album, the Chorus takes its listener on a tour across the richly illuminated landscape of Russian Orthodox vocal compositions. As inspired as the music itself, the Chorus lends both the depth and range of its voices to creating an experience grounded in both faith and musicality.

Following what seems to be the Russian vocal tradition, each of the pieces performed on this album are sung with great intensity, reaching an almost violent pitch at times. While this intensity serves the Chorus well most of the time, some greater sensitivity to dynamics and interpretation could have rendered the album as a whole more continually listenable. As it stands, each piece is performed well, but the overall effect is somewhat tiring for the listener.

That said, there is nonetheless a great togetherness and blend produced by the singers. A seamlessness to the sound characterizes many of the songs. Perhaps relatedly, the soloists sometimes seem out of their depth against the forceful background provided by the Chorus. A good range of voices may be found in these singers, with some natural variations in tone once would have liked to see put to better use in specific solos.

Finally, it may be said that this Chorus has found its niche, and occupies it well. This is not an album for anyone expecting great variety of music or indeed of interpretation; rather it is a consistently well-done presentation of a specific genre of song, precisely as the title implies. It makes its purpose clear in the title and the notes, and fulfills that purpose well.