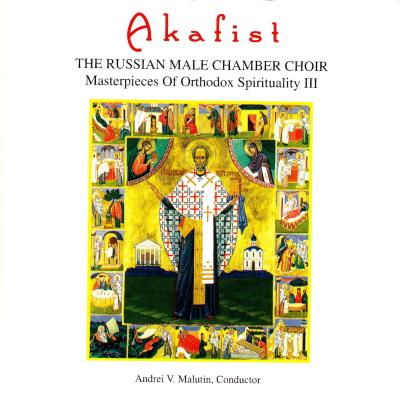 Akafist's Masterpieces of Orthodox Spirituality III is a live collection of sacred, Christian works at the highest caliber of the Russian choral tradition.

The album is uniformly dense, dark, and awash in natural reverb. While faster tempos and wider vibratos suffer in the slur of the church's environs, the dramatic nature of these works is consistently heightened. Further, the absolutely static "production" makes this wide variety of composers works sound almost as if written by the same hand. While not always perfectly suited to the musical moment, the group's overall signature sound is made unmistakable, in part by this uniform choice.

With careful attention to emotive phrasing and the broadest range of dynamics, Andrei Vasilyevich Malutin artfully directs this classical ensemble to create moving, nearly operatic textures. The careful listener will hear many moments of unearthly contra bass or "basso profundo" in which notes as low as the F# below low bass C are quietly generated. This, along with atypically low and dense voicings, helps to create the unique sound of this classical ensemble. (Of course this is all accomplished without the assistance of the octavizer or other studio effects.)

(As long as we're dropping parentheticals, don't be fooled by the 14 English titles: all the sung lyrics are, appropriately, in the original languages. Translations are in the liner notes.)

Masterpieces III was recorded in the Saint Nicholas Russian Orthodox Church in Philadelphia in 1995 on Akafist's third American tour. The album was first released in 1996 according to its copyright indication and is only in 2008 being submitted for RARB review. This is a little odd since Akafist's Masterpieces of Orthodox Spirituality II was also recorded in 1995 in the United States but reviewed by RARB in 1998.

Regardless of the hiatus, for lovers of the Russian choral sound, for those who could benefit from a lesson in dynamics and phrasing, and for those chasing Akafist since 1998, this is a recording to grab hold of.

Hold on to your hats, folks; Akafist's Masterpieces of Orthodox Spirituality III may just be the best recording of Znameni chant, chants from the Kievo-Peceherskaya and Troitse-Sergieva Lavras, and 19th and 20th century Russian church music I've ever heard.

To be clear, Akafist's Masterpieces of Orthodox Spirituality III is also the first full-length recording of Znameni chant, chants from the Kievo-Peceherskaya and Troitse-Sergieva Lavras, and 19th and 20th century Russian church music to which I've ever listened in its entirety.

Presuming you have some measure of interest in the material being covered here, there can be little doubt that you will enjoy the album. Apart from a full, rounded sound that sounds exactly as robust and passionate as you'd imagine an all-male Russian chamber choir should sound, the group's greatest assets are its terrific group dynamics and diction. There's no editing to be noticed here and indeed, as the album was recorded live in a church, there's little noticeable mixing beyond the initial mic settings. That is to say then, that the exquisite pianissimos and seamless blend are created exclusively by the singers. No small feat that, and probably the one aspect that held my attention from track to track.

The quality of the live recording, made in 1995, is a mixed bag. Recorded in a church, it absolutely preserves the sound as one might hear it sitting in a pew. Perfect for archival purposes but perhaps not the most compelling listen in one's living room, unless one is a regular churchgoer who relishes the "original" sound. For me, the group always sounded like they were in the "next room" rather than right in front of me and that only made it harder to stay focused since, absent an understanding of the language and/or a more than passing familiarity with Russian sacred music, it was often quite difficult to distinguish one track from the next.

If you don't have some particular interest in this music, this is one you will skip. Unless you're making a sequel to The Hunt for Red October in which case you should consider these guys for the soundtrack.

From the name of the group and the album alone, there is already a segment of the a cappella-listening population that will have no desire to purchase Masterpieces of Orthodox Spirituality III by Akafist, The Russian Male Chamber Choir.

For those with broader tastes, Akafist presents 14 mesmerizing compositions that revel in the beauty of male voices joined in harmony. It sounds as if it were recorded in a church (which it was) and that is the extent of the production. Their naked voices stand alone and, in over an hour of music, there is nary a sour note. The blend is so tight and the dynamic range so broad it sometimes sounds like 10 men singing and something sounds like 100 (actual numbers: 16-18).

Every word is in Russian, which may be frustrating to some, but Akafist provides translations in the liner notes — the songs range from prayers to praises. For me, they could be singing Russian translations of banal pop songs or no words at all — the musical compositions in and of themselves set a tranquil mood. This is the kind of music you put in the CD player for a quiet evening of reading back issues of The New Yorker while sipping a glass or three of wine.

One fix for "Masterpieces of Orthodox Spirituality IV", which I do not doubt is in progress: I had to turn the volume on my stereo to double where I normally listen, which made for an unwelcome blast to my ears when I changed out CDs.