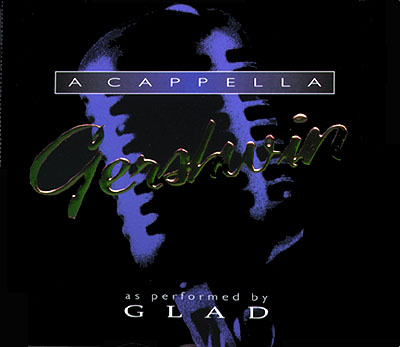 Style is the substance of this review.

I have no complaints about the tuning on this album. No production gaffes to question. No ugly voices, no massive thematic departures. Just a lot of similar music which you will like, or not like, entirely because of your musical tastes.

To me, it all sounded nice. Real nice. I'm a big fan of Gershwin, and well-executed Gershwin tunes are an unsinkable formula. The five GLAD guys have good voices, the musicality is right there and the arrangements are nice, too. Nothing in them turned my head, but it didn't put me to sleep either.

My faint praise is due 100 percent to the fact that reverb-drenched vocal jazz is not my thing. Even when it's done well, as this is. There were only a few songs that sounded like they should be Christmas carols at the mall, which is a pretty low number for this style of music. It's pretty tasteful, non-intrusive and not schmaltzy. Personally, however, I like my jazz a little closer to home. I like small-voice ensembles that sound like live small-voice ensembles, not impossibly blended choruses. I prefer hearing individual voices, and hearing the ring that only comes when voices are let loose to do their thing. Studios change the sound, blend out the overtones. That kind of smoothness doesn't rock my world, but it can float my boat just fine (to mix a cliché or two).

The medley was my favorite track — I thought the interpretation of an American in Paris was terrific, and arranger Don Hart packed a lot of other great songs in behind it. I thought Gene Puerling's But Not For Me was a great arrangment of a great song, but his version of Embraceable You left me unmoved. I thought A Little Jazz Bird sounded the most like a Christmas carol at the mall, but I freely admit that I've never liked the song to begin with. And I was disappointed in A Foggy Day, but that's because I've always adored Ella Fitzgerald's eloquent, ornamented delivery of this beautiful number.

See, it all comes down to taste and style. There are many ways you can get a very good Gershwin fix. If the very name Gene Puerling makes you sigh fondly, go buy the GLAD album. It's good. But if you haven't dusted off your Singers Unlimited album in years, get your hands on some Sarah Vaughan or Ella Fitzgerald instead.

George & Ira Gershwin. Their songs have become a cornerstone of American Music as we know it. Artists have been performing them for decades. Some of the lyrics seem a bit dated, but most still sound good today.

GLAD is a modern-day Christian A Cappella group known for their outstanding blend and majestic studio sound. They have many albums under their belt, and lots of fans around the world.

Put these two together and what do you get? A real keeper of an album. This album is just chock full of outstanding songs from beginning to end. Each song is touched by GLAD's trademark sound, spot-on tuning, and an interesting arrangement to boot. If you never got into Gershwin tunes, you just might find this to your liking. If you are the kind of person who likes GLAD's sound, but not their almost exclusively sacred lyrics, you will like this change of pace.

I did not find a single problem on this album concerning it's production. Very professional, very polished. There are a few songs that really stand out on this album. One that I have to mention is The Gershwin Medley. You get a little bit of some of the Gershwin brothers' best (and most famous) stuff: An American In Paris, Strike Up The Band, How Long Has This Been Going On, Summertime, They Can't Take That Away From Me, and Rhapsody In Blue. It is a really well put together medley, moving from one song to the next smoothly and appropriately.

Recommendation for this album is easy to get from me. I like it. It is a great sounding album. But, if you don't like Gershwin tunes, or can't stand that GLAD sound (yes, there is a GLAD sound) you should hold your money. Listen to someone else's copy first and see what you think. You might like it.

This is an interesting CD for sure. GLAD definitely has a unique sound, and this CD is right in line with their other a cappella albums (I won't mention those other albums). As far as "innovation/creativity" goes, subjecting Gershwin to the GLAD formula is creative, but the group's arrangement style hasn't changed in years, be that for better or worse.

Primary soloist Ed Nalle has such a bright voice that he does much better on upbeat, driven tunes than on slower ballads which require a more mellow approach. When he sings lead on songs that need a delicate touch (The Girl I Love, A Foggy Day, But Not For Me, Can't Take That Away and Someone to Watch), the listener is reminded that his tone is at times strained and his vowels and articulation can get awkward. But what a head voice — wow! It's that soaring clarity and peppy arrangements of well-known tunes that won GLAD accolades from the a cappella community in general. (That and the super-tight production.) Jim Bullard does a great job with Summertime in the medley, and I wished he was more prominently featured throughout the album. But Ed's the producer...

Die-hard GLAD fans (Test yourself — do you know all the parts to all the songs on Project I?) should probably get this one, and Gershwin fans may be interested to hear the arrangements of the old favorites. If you have been living in a box for ten years and haven't heard of GLAD before, I'd recommend The A Cappella Project I over this one for your first experience.

GLAD has above all a practiced musicality and a fantastic blend, both of which they put to great use on this album. No song lacks the wonderful smoothness long-time fans of GLAD have come to expect, and several songs are pure gems. GLAD's long-practiced familiarity with each other allows the listener at times to forget the individual voices and simply enjoy the jazzy chords for what they are. Fans of Take 6 and the Swingle Singers will find a lot to love here.

On the down side (and not down very far), GLAD's supple blend translates at times into a muted energy and lackluster soloists. The group has a strong tendency to keep dynamics at roughly the same level across songs and within a given song. Relatedly, the soloist (normally the same, lead voice), while within the dictates of Gershwin's medium, may sound nothing if not bland. Together these two features make the album prime for background listening, gently enduring if not charismatically engaging. Not to put to fine a point on it, GLAD sounds very white, not a failing as such but keeping the album less interesting than it could have been.

That GLAD is slightly bland but blends so well lets the listener delight in the variety of arrangements supplied by some well-known arrangers, among them Gene Puerling of Hi-Lo's fame. The more erudite listener may well enjoy the chance to trace the subtleties of each arranger's contributions.

GLAD on Gershwin sounds good. A bit more spirit would have been a mixed blessing: more intensity perhaps, but at the price of GLAD's superior blend.

This is a great CD. I can't fault the writing, the music is decades old. Yet, GLAD proves that the spirit and heart of George and Ira Gershwin are timeless. There is not one single dull track on here.

You can tell the arrangements are going to be fantastic just by reading the liner notes. The wealth of experience that went into these eleven arrangements is staggering.

I am curious why GLAD chose to record They Can't Take That Away From Me as a stand alone track when it was also part of their medley. Perhaps to just show two different versions of the track? The medley was a bit long for my taste, if only because six different songs were combined into a near eight-minute track (long by a cappella standards).

The best thing I liked about the album was its unpredictability. Even within the tracks, there were shifts in the melody that forced me to listen with increasing interest.

Recommendation: Knock down a bank, break open a piggy bank, dip into the rainy day fund...this is a must have.

This title is no longer available through River North Records. Contact GLAD Productions. Call 1-800-772-4523 to order by MC/Visa/Discover. Also order via GLAD's official website at www.glad-pro.com. For email inquiries: glad@mediasoft.net