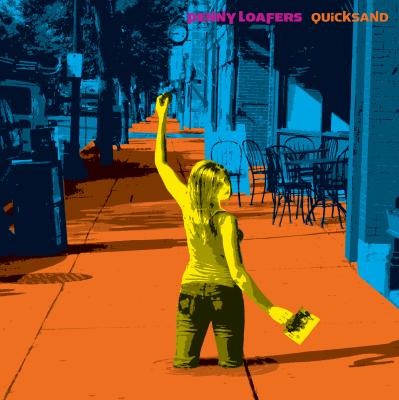 Quicksand brings us a nice clean sound with a bit of an edge on a strong new recording from the University of Pennsylvania.

The Penny Loafers rock out with the mainstream, but their voices have shades of musical theater to my ear. The belty babes and breathy boys make the most of what they've got, and they sound like they care about what they're singing. Behind the leads, a consistent collage of chords, percussion and texture keep things moving along nicely.

I quite liked the arranging style on this album. For the most part, this group uses just the right amount of vocal texture, backed by straightforward percussion in keeping with the straightforward rock feel. Block chords sound so much better when there are other rhythms pulling them together, and the Penny Loafers have a great sense of how to fill the gaps in a song without weighting them down. Run is a great example of this approach, which keeps a not-very-interesting song from running off the rails.

For those of you who track the quantitative side of RARB, I can place this album fairly neatly on my continuum of recent collegiate discs. I liked it more than the Amalgamates' latest, less than Reverse Osmosis. All three records feature excellent tuning, strong protection and basic singing skills. The intangibles show a little more difference — I found Reverse Osmosis warm, where the Amalgamates were cool, and the Penny Loafers fall somewhere in between.

Also, my impression is that the Penny Loafers's great tuning was rather more assisted than singing by comparable groups. To my ear, there was a slight sourness to the tuning that suggested it had been muscled into shape, rather than burnished after a strong live performance. I rarely hear collegiate groups in person these days, so I can't say whether my impression holds up. But a sample track like Girl reinforces my instinct. The uberprocessed intro propels the song into being, and the solo is well taken care of in the mix. But the more naturalistic chords don't always lock and don't mesh with the augmented bass line.

When things work, this group really comes together. Hear You Me is beautiful, and the album-opening Chocolate has nice verve. All in all, the Penny Loafers have made a record to be proud of, that will sound nice for years to come.

Fans of collegiate a cappella have heard Quicksand before. With two covers each of Snow Patrol and Kelly Clarkson and a track list that reads like the collegiate Top 40, the Penny Loafers have abridged the past six months of college a cappella recording. Quicksand has a polished sound, yet none of these tracks will earn iconic status as chronic intonation problems suck the album down.

Quicksand has the rock mixing of today's collegiate a cappella recording. The bass lines are thumpy and well rounded. The vp is mixed to resemble its instrumental equivalents, yet drum sounds and patterns maintain a pleasant hint of humanity. Background vocals are spread broadly into well balanced chords and compressed to achieve a creamy, unified sound. Highlight lines, those short segments of added texture that lie outside the choral block, don't blend as well, having not been run through the sonic processor, with dissimilar tone and shaky pitch. The effects processing is tasteful; there's nothing new here. Hear Me Out features some particularly nice vocal effects, mimicking Frou Frou's clipped, bouncy intro. Swallowed In The Sea and Girl feature some distortion and eq tonal effects.

The album is produced cleanly, but the Penny Loafers neglect a minor detail: good intonation. Painful intonation in background voices, often on sustained soprano lines, ruinously mars many songs. Songs with isolated yet sickly pitch problems include It's Only Life (sharp sopranos going into the bridge), Swallowed In The Sea (muddy pitch on bass attacks), Because Of You (solo bridge, sharp sopranos on "doh" in verses), Your Ex-Lover Is Dead (a soprano pops over her pitch during verses), and Run (lone soprano wavers through choruses). Singing under pitch is more common on recordings than sharpness, and maybe its frequency makes it more palatable. Most of the Penny Loafers bad pitches push sharp. Sharp intonation is maddeningly, gratingly, grimacingly painful, causing listeners to cock their heads, squint their eyes, hunch their shoulders, and grit their teeth — and no song is a better illustration than Hear Me Out. A lone soprano pushes sharp in the verses and horribly sharp in the choruses. The song is mortally wounded, and sloppy blend on the song's backbeat notes renders it nearly unlistenable. This is a crying shame because the soloist brings her own stamp to the song's quirky solo sound. Hers is a bold, engaging performance with several memorable phrases, especially the stylized, eponymous lyrics of the bridge.

The Penny Loafers are graced with attractive voices, yet the group has few real star soloists. Even so, several performances stand out. First is the mentioned Hear Me Out. The most intimate performance on the album is the Jimmy Eat World-styled solo of Hear You Me. He is miked very close in the verses, and the tender vulnerability of his singing had me hanging on every lyric. Several alto soloists stand out for their dark, back-of-the-throat singing. The Humpty Dumpty soloist fares best, with a womanly turn as Aimee Mann. Her performance is warm, yet unmoving. College groups seem to believe Kelly Clarkson sings way back, as both soloists sing forward in the comfort of the low pitched verses and then retreat into their chests and sinuses in the higher, belty choruses.

The Penny Loafers do not strike me as artistically ambitious, with covers of safely trendy bands like Snow Patrol, Kelly Clarkson, Frou Frou, Coldplay, Beck, Sia, Chantal Kreviazuk, and Jimmy Eat World. Except for isolated voices singing with inexcusably bad pitch, most of these covers are respectable. Unfortunately, there is an "it's all been done" quality to the album, with little creativity or innovation to engage the well-rounded a cappella listener.

The first thing you notice when listening to the new Penny Loafers album is that they've kicked both the production values of their recording and the musicianship of the group up a notch. Kudos to them for making such drastic improvements. Quicksand is head over heads better than their last foray into the collegiate disc-making scene.

The second thing you notice? Every song sounds exactly the same. From the tuning, to the subject matter, to the drum kit, to the arrangement, to the soloist — that bland, homogenized sameness that is death to one of the most amazingly creative musical experiences on the planet. In fact, the only way that I was able to tell that Keeping had ended and that Humpty Dumpty had started was because the gender of the soloist changed. Otherwise you could have told me that it was the extended remix of the first song, and I would have believed you. Literally, it seemed like the arrangers decided to save time by lifting the lyrics from one song and laying them over the previous song.

The blend, while not perfect, is still solid through most of the tracks. There are some painful intonation problems on Hear Me Out and Because Of You. At times, it sounds like everyone was just too tired to care anymore. The soprano line in Hear Me Out was particularly mind-boggling, as it takes more skill to sing that out of tune continuously than it does to simply blend poorly. Several of those clashing quarter tones could have cut diamond.

Chocolate, Breathe Me and Time really save the album. The sound and emotional atmosphere that it seems like is trying to be created on this recording is captured in those three songs effortlessly.

Oh yeah, there is definite a story going on here. With titles like the aforementioned, Your Ex-Lover Is Dead, It's Only Life, Run and Swallowed In The Sea — the storyline of a relationship gone horrible wrong is pretty evident. Now THAT is a bit of creativity. I wish more groups had the time and the wherewithal to really plan the story arc of an album. But were able to deliver the material with a bit more pizazz than evidenced here.

There must be something in the water at the University of Pennsylvania. After the snooze fest that was the Dischords' latest release, the Penny Loafers have delivered a recording that also deserves the title. Unless you are a true fan of the group, I'd stay away, unless you want to get sucked under their Quicksand.