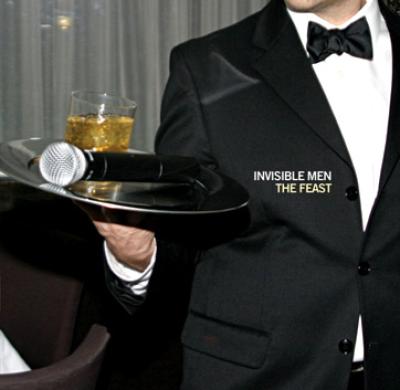 Thoughtfully created and scrubbed squeaky clean, The Feast is bright and breezy tenor rock at its best. The Invisible Men tease us with five songs that evoke the exciting, early days of the all male vocal band and groups like Blind Man's Bluff and Graffiti Tribe.

With the exception of New Sensation, which is simple and repetitive, the arranging on The Feast is a textbook study on how to create the vocal rock sound. Unfortunately, the Men felt it necessary to hire an outside gun, Samrat Chakrabarti, to arrange all the songs except — you guessed it — New Sensation.

Most songs are a joy to hear. The Feast uses wide, soaring chords and bright tones to raise a stirring wall of sound in every chorus, with voices sweeping across vast expanses of chords. Songs feel breezy and cool, opening up room with a freedom that's hard to achieve in the ProTools Era. The choruses of Fly Away are full of sing-along, sliding "ah"s and "yeah yeah yeah"s. Waiting For You opens with an addictively simple, hooky "joh duh meh joh duh mehdeh oh no!", builds into the choruses with passing tones on airy "ahs", and accompanies a big-voiced soloist to crescendo, and then strips back to the hook. The contrasts of big chorus and stripped down verse are an engaging mix of intimate and grand, calm and strident.

Perhaps much of the success of The Feast's juicy choruses is the range of Invisible Men's singers. The group is arranged as vp, bass, pop/rock tenor solo, and two harmony tenors, and each tenor soloist is perfectly positioned in his range to sing his song. Though the album's bass is eq'ed and octave-dropped deeply enough to maintain equilibrium against the high voices, I still miss mid-range male voices on albums like this. Fortunately, the Invisible Men sing well together, with a creamy yet focused blend that doesn't betray the group's composition. But make no mistake: this is tenor rock. Baritone balladists are not welcome.

These tenors have strong technique and excellent pop/rock style, with few moments of weakness. Blind Man's Bluff still has dibs on Semi-Charmed Life, with harder rockin' energy. Partly to blame on this album is a soloist whose style and technique falter slightly in the lower energy, lower range of the bridge. Pink's soloist is a little over the top, even for an Aerosmith cover, with a huge vibrato and "Rent"-like glam rock style. Others may like this soloist's style, but I think Steven Tyler's outsized personality makes the original easier to swallow.

Though The Feast evokes the sound of late ‘90s-era, all male vocal rockers like BMB, this album is produced with the cleanliness of post-modern engineer/producer John Clark. The album maintains the feel of natural voices, but they feel… so… damn… clean! As seems to be his way, one song of The Feast sports the punchy, artificial sound that is Clark's signature. Waiting For You has the gel-toned, funk keyboard bassline, hyper-real snare, and shimmering veneer over chorus backgrounds that, to me, sound Clarkian.

The Feast is an accomplishment deserving a guarded respect. The album is fun to hear, but the Invisible Men must share accolades with Chakrabarti and Clark, two men whose reputations are established for crafting a good sound. Still, my eyes are peeled for Invisible Men's next effort with the hope that the Men can stand on their own merits through worthy original arranging and songwriting.

There is a new posse in town — they are calling themselves Invisible Men. While the name might be a bit atrocious, the sound that emanates from them is anything but. I mean, who else but Clay Aiken really wants to be invisible? And with the fantastic Warren Bloom as one of the top chefs, it's a hard name for the guys to live up to. Which is a "good thing" as Martha Stewart would say.

Based in New York City, this quintet delivers a power-packed punch of pop, rock and funk on their debut EP The Feast. And what a delectable morsel of a cappella richness it is. What is their recipe for success? They cover all of the basic ingredients with a master touch — perfect blend, rhythmic precision, pristine recording techniques, pocket percussion — then deftly add a signature spice that caramelizes into one succulent dish.

It's interesting to note that all of the arrangements have been provided by Samrat Chakrabarti, who is not a member of the group. Hence one of the reasons for the four. I would be a serious hypocrite if I called out scholastic groups for not arranging their own songs. On the other hand, I mean, the arrangements are by Samrat! If you can sing a lick (a Southern colloquialism if you are wondering), then having a Chakrabarti arrangement will vault you to that next level.

That issue aside, The Invisible Men do serve up a heaping dish of attitude in their performance. The first thing I noticed was the drive and determination of lead tenor Tyler Pennock. He possesses a brashness and vocal presence that may not suit everyone's palette — especially when he sings "yeah, yeah, yeah", but it mixes well with the stew the other guys are cooking. Of his three solos, Fly Away is definitely the cream of the crop. His effortless slide into the bridge-filler What I Am hits the spot. His turn on Pink is almost as intoxicating. The Aerosmith cover is new to me. It comes off as a bit listless here, and more than a little cloying, like a bland salad trying to be upgraded with a balsamic vinaigrette when ranch would have sufficed. New Sensation didn't have the same tasty appeal of the other two songs, not all Pennock's fault, just didn't have the same verve. Not to mention there was an odd inclusion of Who Are You? as the bridge. Next.

Semi-Charmed Life should have not been on the menu. It is the one song that didn't seem to fit the Invisible Men mold. As if it were the only one not specifically arranged for the group (I have no proof that any of them were, but this one sounds the most stale and sour.) Angelo Rufino does an admirable job on the solo, but unless you start with a higher quality of cream, you get the same quality of fromage no matter how long you churn it.

Which leaves us with the chef's blue plate special. The group completely gels on Waiting For You. A scrumptious solo by Bloom bubbles over a veritable feast of dynamic swells, cool chords, hot vocal play and pleasing phrases. This is it.

With production handled by John Clark, The Feast will definitely fulfill your appetite for good a cappella music.

The Feast is a a tight, ultra-poppy EP from the Invisible Men of NYC. There's not enough music to be a feast, but the music is so tasty that it's certainly the shrimp and caviar appetizer of the a cappella world. When's the full-length, main course coming, guys?

John Clark and Samrat Chakrabarti teamed up for The Feast. Samrat's arrangements for Hyannis Sound blew my mind, and he keeps the bar high on this album. So many fresh syllable choices, so much detail packed into each track. His arrangements are clearly as much fun to sing as they are to listen to, because the Invisible Men keep the energy high, the diction crisp, and the groove deep. The Lenny Kravitz mega-hit Fly Away is a solid opener, keeping Lenny's funky mood and soul power intact. Waiting For You is built on gorgeous full chords and the excellent vocals of soloist Warren Bloom. New Sensation has spunky j-based sixteenth notes to neatly string the song along. The transition to The Who's Who Are You? is fun, though the transition back to New Sensation sounds awkward. Semi-Charmed Life, the only track not arranged by Samrat, is a joy to hear, but the soloist should have been re-recorded in a few weak areas. The Feast ends with Pink, which has a sassy vocal delivery from Tyler Pennock that closes this too-short-must-have-more album perfectly. Who wouldn't love these great vocals and these feisty arrangements?

My stomach is growling, my appetite is growing...