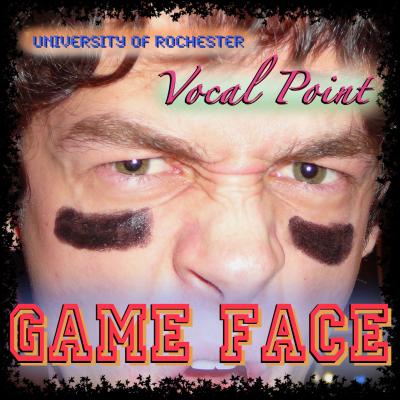 Game Face is old school in all the wrong ways. Rochester Vocal Point appears to have assembled a credible 1990s era live show and recorded it with 1980s standards. The result is a friends 'n family album that simply isn't up to today's college a cappella standards.

I bet the live show sounded a lot better, and I want to credit Vocal Point for their effort. The problem is, recordings require a very different touch. For example, the lower voices are loud and blatty on every song. For altos in a live, unmiked setting, it's the only way to be heard. But on a CD, it kills the blend and dooms the tuning, which in Vocal Point's case needs all the help it can get. Likewise, the vocal guitar solos were probably edgy and funny in concert. In the studio, they remind us all why "vocal guitar solo" inspires so many cringes. River, the only ensemble number, would have sounded good 10 years ago, but it just can't keep up with the times. As for the rest of the material — a handful of decent soloists is about the best I can report.

Despite the tough conditions, there's some nice singing on this album. My favorite soloists were Naomi Takagi and Meredith Flouton-Barnes, who turn in good work under very trying circumstances. I'd love to hear what they could do in better weather. Meredith deserves particular credit for saving Midnight Train to Georgia from utter disaster, floating over an absolutely dreadful background. Naomi has slightly better support on Heard It Through the Grapevine and I believe is the husky cool soloist lurking at the back of Don't Lie, if I'm correctly matching the liner notes to the music. Don't Lie shows that Vocal Point actually does better with an up tune, where busy arrangements help the tuning limp through. Real Love, another Meredith offering, benefits from similar features, as does The Sun, ably led by Bonnie Jarrett. Alone isn't bad either, thanks to Kristy Doot's smart decision not to over sing, letting the material do the heavy lifting instead.

Good luck, Vocal Point. You picked a nice bunch of songs, and I hope you had fun singing them. The rest of us will wait to catch you on the next album, or better yet in person.

Game Face is another yearbook for friends and family, but not a particularly good one. University of Rochester's all-female Vocal Point seems to have taken a step backwards here from their last album The Swimsuit Issue. Mark Manley remarked then, "it's not particularly bad — it's just boring". But Game Face is somewhat bad — in its generally weak tuning, in its uncreative arrangements, in its lackluster performances. Vocal Point doesn't appear to be working with an all-star roster here, but they also could have probably put in a few more practice sessions before game day.

Tuning here tends to be an uneasy truce between the passable and the painful, although the latter rises to the fore a number of times. It's not helped by the practically nonexistent production, evidenced by the fact that the four live recordings here have more consistent tuning than any of the "studio tracks"; a few of the wonderfully dissonant harmonies on River even had me tuning back in from self-imposed sonic exile. A bit more effort in the studio might have given these girls a chance to shine, but we're left instead with a top-heavy mix that overexposes wince-worthy soprano descants while burying sometimes palatable soloists in the background.

A team does itself no favors when limping into the big game unprepared and unequipped. Here's hoping Vocal Point is putting in some off season training before their next at bat.

An album of serious ups and downs Game Face, the latest release from the University of Rochester's Vocal Point, shows exactly what happens when a once cutting-edge group doesn't keep up with the times. You see, Vocal Point appeared on BOCA 2000 with their recording of Still In Love, and that's exactly what this album sounds like now — a really good female college a cappella recording from 2000. There are a fair handful of things these girls do well, some of them slightly above average even now. Unfortunately, the bar has been raised since then, and the majority of this album sounds behind the times.

Let me start with some of the good things going on here. The soloists by and large are pretty good, as is percussion (I like your kick drum, ladies). I would be remiss not to mention Kristy Doot's beautiful and intriguing arrangement of Joni Mitchell's River that earned, deservedly, an outstanding arrangement award in the 2006 ICCAs. Energy is also fairly high throughout, and as a result this recording is somewhat endearing despite its faults.

So, all those things are nice, but what do I mean by "behind the times"? Unfortunately, it's in large part the quality of the recording that's holding this group back. Backgrounds are muddy and pitchy, especially in spots where textures are thickest. Plus the whole thing sounds kind of wimpy. Like I said above, I don't think it's from lack of energy, but rather that the treatment of the vocals in production doesn't give them the presence they need to achieve the full polished sound that has become standard in contemporary a cappella over the last five years.

Now, lest you think that I'm a techno head who needs to hear a ton of studio polish before he's satisfied, I promise you I'm not. When, however, I have a hard time discerning between the live and studio tracks, I would suggest to the group that they consider taking more advantage of the studio next time around. In short, Vocal Point has a good handful of things going for them. Solid soloists, above average percussion and arranging, and fun energy give me a good idea of why they earned BOCA recognition a few years ago. If, however, they want to achieve that status again they need to take more advantage of modern techniques in a cappella recording. Until then, their releases will probably remain like this one — a good yearbook album.

To order this album: