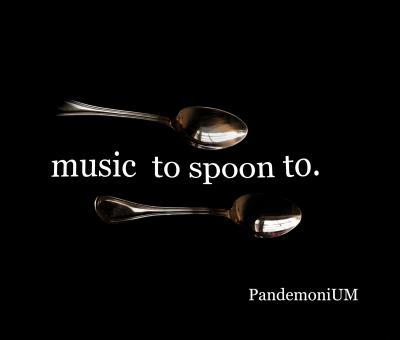 PandemoniUM's sarcastically titled release Music To Spoon To starts off with the lyrically dark Take Me Out and doesn't hit a traditionally cuddly tune at any point on the album. I liked that. I also liked a number of the leads. But I wasn't crazy about the blend, tuning, VP, arranging or production. That leaves Spoon in the Yearbook category.

Praise first. The I-don't-care-'cause-I'm-so-alternative whiney tone on God Put A Smile Upon Your Face, The District Sleeps Alone Tonight, and Inside Out was just what the skateboarder ordered; the quirky soul on Spiderwebs and Criminal a teen boy's dream; the covered Evanescence-esque tone on Nobody's Home and Another White Dash appropriately gothic; the Lilith Fair rocker sound on Killing Me Softly and the female belter on Queen's We Are the Champions within The End, both fresh and subtle choices.

However, in order to really appreciate these voices I had to block out nearly everything else. PandemoniUM's serious intonation problems make Spoon uncomfortable at best and unlistenable at worst. Even in those brief moments when individual parts are in tune, the blend and balance are terribly awkward, with basses often attaining a distinctly forced tone while tenors and sopranos burst through the mix on wholly unimportant parts. Sporadically distracting syllables may annoy listeners who can overcome the aforementioned musical problems, but much worse than this is the occasional flat-out wrong chord in an arrangement.

I have no problem with abandoning the original chord structure of song, breaking new ground, exploring new meaning. But that's not what we're talking about here.

Let me give you an example: Counting Blue Cars stays pretty true to the original's chord progression until the big chorus comes in ("Tell me all your thoughts on God"). The original gives this satisfying progression: I-II-IV. The inner harmony of sol-fi-fah is a key part of the magic. For unknown reasons PandemoniUM's version delivers this progression: I-vii-IV. If theory isn't your thing, I apologize. But it's like being smacked in the head, especially when it's unexpected. And then later when the basses don't descend (which I think is deliberate, though it's hard to tell), we get a slight variation: I-V7/I-IV. Better, but still gross. Arrangements should not evoke a wince.

The same kind of "what-the-hell-was-that?" arranging occurs during the We are the Champions portion of The End. The line is "I consider it a challenge before the whole human race and I ain't gonna lose"; Queen's progression is basically I-V-vi-II-V. While the harmonies leading up to this are fine, the basses never hit on the sharp four of the chord and the result is weird as hell.

If the chords had been in tune, I would have assumed that the wrong setting was used on autotune resulting in the artificial removal of the sharp four, which does happen to the occasional inexperienced engineer. But one can be completely confident that this is an autotune-free release. The Case of the Missing Sharp Fours remains unsolved. I'll alert Nancy Drew.

Music To Spoon To's production provides quality mics, but little else, which leaves a great many of PandemoniUM's flaws painfully exposed. Thankfully their leads bring the scores up a bit, but it's just not enough to carry the day in any other than a live setting. There's a lot of talent in this group, but Spoon isn't the recording to show it off.

Music To Spoon To, by the University of Maryland's PandemoniUM, would be a lot better if the arrangers in the group did one thing — stop using the open vowel in their arrangements. I'm talking about that blasted "ah" and most of the variant combinations with caustic consonants. Stop. Now. Please.

You, dear reader, may be asking yourself: "Has TeKay finally lost his marbles?". My answer is a resounding "No!". Seriously, the evidence is right there on their latest recording. With every track, you can hear it. The group will be jamming along on a well balanced "din" or setting a solid foundation with a well tuned "oo", and we approach a chorus or bridge and the song immediately crashes. The "dah"s, "bah"s, "wah"s and "ah"s break free of their normally easily tuned and balanced chords into a cacophony of screeching sopranos, lackadaisical altos and bleating tenors. It's bizarre.

Other than the tuning and balance on that particular syllable, the album is interesting. The first five songs are ten times better than the second five. Energy pulses through each track. Unlike some albums that I've ranked higher, this one shows a lot of attention paid to dynamic variety, tempo shifts and group phrasing. The percussion, when it is not mixed too loudly, is on point — supporting and propelling the drive of the songs when applicable. The sound suffers because the background is often mixed too high (those damn "ah"s again) ... except when I really want to hear some thumping bass, in which case the sound peters. Overpowered soloists is just inexcusable on a studio mastered recording.

As with many collegiate groups, it seems like the female singers are blessed with the better solo quality voices than the men. While PandemoniUM's singers are a bit more evenly matched, two performers show where the vocal precision diverges. Juliana Stevenson delivers her solo on Criminal by cutting through the dreck, including horrible background tuning, with precision artistry. On the flip, Mike Saffan does character singing very well. It's definitely an acquired taste. I have no idea what he's singing during the chorus of God Put a Smile On Your Face. Saffan renders the vocal line unintelligible, sounding more like a cover of a Hinder song than Coldplay.

Overall, the arrangements are really strong, though occasionally lapsing into the tired trend of layering various song lyrics into the bridge to make it more interesting. Case in point is the opening track, Take Me Out. Woven into the inner workings of the arrangement is the Donna Summer classic Love to Love You with Ciara's 1, 2 Step added on for good measure. Actually, the pairing of these songs is just short of brilliant, in theory. The struggling Lothario meets two vixens of the night from which he is to make his fatal choice. But because the balance comes unglued and the 1, 2 Step soloist is forced to fit her lyrical line into the arrangement rhythmically, the combination flounders when it should soar. Steve, Juliana, Mike, Dara, Joe, Kelly, Chad, Danny, Adeline, Cari, Lucy, Laura and Ray, you all have it in you to make fantastic arrangements and do great work. Keep it up.

And stay away from that pesky "ah".

There is something kinky about owning an album called "music you can spoon to". More than likely, your partner would stick a fork in you and say you're done.

University of Maryland's PandemoniUM has put together a cohesive album of eleven tracks, favoring a mostly pure, organic recording and mixing style. I can confidently assume that this group puts on a good live show. My obligation with this review however, is to evaluate the album, not the group.

Hands down, bar none, bottom line, no question, without a doubt the most tragic flaw in this album is the absence of an experienced guiding hand.

I commend groups for wanting to represent themselves purely but to forgo a click track and rhythmic editing and to leave mistakes in the mix does a disservice to the fans and members both.

I disagree with nearly every production choice on this album. The reverb and delay, when I hear them, too much. The EQ on the male soloists, misguided. The balance is just wrong. The basses and sopranos drill laser beams into my skull from the sides while I struggle to focus on the solos in the center, pushed too far back, just out of reach.

The (unaided) tuning is palatable, ninety percent of the time. PandemoniUM also executes dynamics very well without any digital help. I must admit that I stifled a groan when I realized I had to listen to yet another cover of Killing Me Softly, but to my pleasant surprise, the track boasts the best singing and arranging on the album. The song begins weakly and with some poor syllable choices but, like many of the other tracks, it tightens up as it progresses. The bridge is the highlight of the album and showcases some real arranging, in contrast to the more "transcriptive" arrangements and surplus of "doo" found elsewhere. The soloists are merely solid overall, with the sexy exception of Juliana Stevenson on Criminal.

The arrangements get the job done but do little to move me. Less "doo", fewer song quotes, and more respect for listeners's short attention spans would go a long way. At several points, most notably in the tenors on Counting Blue Cars, I find myself singularly focused on the awkward syllables.

The percussionists have chops, but the treatment of the percussion tracks is horrid. I have to clean the spittle out of my ears after each song. All the tracks employ the same natural, non-sampled style, the snares and hats hitting much harder than the kicks. The percussionists and the basses would both benefit from some studio performance training. The basses are brassy and loud, instead of sounding relaxed, resonant, and lazy — as recorded basses should.

I simply do not feel anything as I listen to Music To Spoon To. Pandemonium: Invest in a producer who can worry about the little things, so that you can focus on the important things, the things you will hear and smile about long after you have graduated: energy and emotion.

To order this album, email the group's business director.