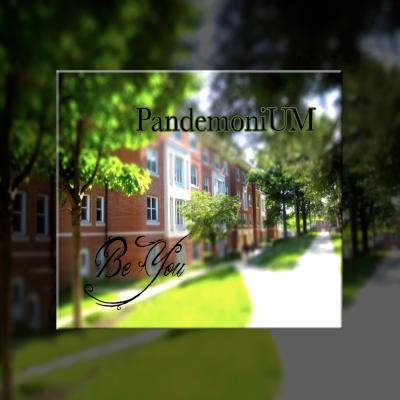 PandemoniUM delivers a better-than-average product with Be You. Expressive and impressive leads carry solid musicianship and elegant production above the average collegiate releases. True, Be You doesn't offer any stunning twists to the pop rock idiom, but it's an undeniably enjoyable cover album sung with intensity and heart.

Standout tracks have as much to do with the quality of the underlying compositions as with the group's performance, and that's a testament to the well-rounded talent comprising the group and its production team. The overall sound strikes a nice balance between parts that sound truly sung, truly vocal, and those whose identities are better defined by studio enhancements. Purists may disagree, as there are effects aplenty, but in all fairness this is a recording that hasn't lost its humanity.

Leads are Panda's best strength. Are you a fan of Scott Hoying from Pentatonix? If so, you'll love Warren Zentz's similar tone color and slightly more rockin' approach on Iris. King of Anything's sweet-voiced Erika Anderson will inspire a few crushes. Andrew Lee's smokey tone is the perfect flavor for Look After You. Chariot's Andrew Lericos brings a dynamic intensity that makes for a strong closer.

Arranging-wise, some of the "j-j-joh"s, "bwow now"s, and other quasi-goofy backing syllables don't serve their songs' dramatic needs well, but the backs do overcome this to a degree by stepping up and phrasing both the lyrics and long vowels with notable musicality. Song choices aren't cutting edge, but they suit the singers well, and good efforts have been made to spice choices up with unexpected pairings, like Chasing Cars/I'll Be Missing You.

Though not the most important element, one of the first impressions an album makes, at least in the physical world, is its cover art. The front cover here is an artistically blurred image of the school. The back attempts to lay out the most important information for would be purchasers: Song, Original Artist, Arrangers, Soloists. This is understandable, but a bit mishandled. Firstly, the composers of music and lyrics aren't mentioned or credited anywhere at all, which is pretty tragic and not a good indicator that royalties have been paid. Secondly, most of the credits for the group's own soloists and arrangers are only first names, despite the group having 20 some-odd members. We can find complete names in a list in the inner pages of the insert, if we want to cross-reference every time. But that's annoying. A review of how to write Liner Notes could have averted many of these problems, and a review now can at least correct digital releases or website information.

Overall, the efforts of the complete creative team come together to show off the best sides of PandemoniUM, and that's sure to please fans.

Certain albums leave me flummoxed. You want to like the recording because it's well sung, the tuning and functional musicality is delivered well, and you really like the group that's produced it. But for some reason, you just don't.

Such is my outcome with PandemoniUM's (from the University of Maryland) latest endeavor Be You. Overall, there is nothing wrong with the album technically. As alluded to earlier, there is strong singing on this album. The arrangements are subtly engaging. The soloists do their thing. And the percussion sits in the pocket. So what's wrong?

Be You is not doing just that. Instead of letting the album breathe, letting the tracks ebb and flow with emotion, having more than a modicum of creativity and originality, the group has decided to play it safe and produce a recording that sounds like every other better-than-average group out there. Grit, emotion, and joie de vivre are sorely lacking from the album. Not to say that the singers aren't pouring their hearts and souls into the performance, but the album has been severely neutered.

As Gertrude Stein once said, "There is no there there."

Except for the glorious Chicago/Clocks, and the pretty exceptional Therapy, there is not one song that makes me want to remember it in a super positive light beyond the dozens of times that I listened to it prior to writing this review. Chicago/Clocks is going down as one of the best tracks of 2013 in my book. Everything about it is magical. It is truly the heart of Be You and is the benchmark for what the rest of the album should have accomplished in terms of artistry and creativity.

The University of Maryland mixed group PandemoniUM has presented listeners with a mixed bag on its latest album Be You.

The album opens with a solid one-two punch. First comes a warm, energetic cover of India.Arie's Therapy, with an intricate arrangement by Suzanne Destio and a sultry solo by Emma Claye. This arrangement really moves, is interesting to listen to throughout, and is a fantastic opening to the album. Then the group manages to top Therapy with Chicago/Clocks, a mash-up of the Sufjan Stevens song with the overdone Coldplay tune. One word: WOW! One way to breathe new life into a tired song is to combine it with another one, and the two arrangers (Alex Brown and Suzanne Destio) have done a fantastic job, from the clever introduction that builds up the familiar Coldplay riff all the way through the end of the song. Beautifully executed!

Then, the album loses steam — abruptly. There are a handful of way overdone covers both from the past (Iris, My Immortal) and present (Boondocks, King of Anything), which don't always have the best soloist fit or the best syllable choices. PandemoniUM's versions aren't bad, but they aren't much better than average, and it's a very different sound from the group that started off this album. The combination of Chasing Cars/I'll Be Missing You certainly gives a different spin on the overdone Chasing Cars, but the track doesn't quite achieve the magic of the album's earlier mash-up: the parts with Chasing Cars sung over the melody of Every Breath You Take are wonderful, but the I'll Be Missing You sections aren't as interesting.

The end of the album redeems itself a little bit but never quite reaches the highs of the first two tracks. Don't You Worry 'Bout a Thing is a fun, energetic arrangement; I just wish that the soloist had been a little bit higher in the mix. Andrew Lee delivers a compelling solo on Look After You, but the song would've been even more powerful with some dynamics or variation in the background. Cold War is probably the best song in the second half of the album — great arrangement from the trio of Adam Kruszewski, Emma Claye, and Suzanne Destio. The arrangement knows when to push forward and when to lean back and give the song some space, and that makes for an engaging listen.

My frustration is that Be You could have been split into two EPs: one that's got the cutting-edge arrangements and performances, and one that's basically a yearbook EP. Be You seems to struggle between the two identities, and that unfortunately drags the whole album down. There are some really terrific moments here, which shows a lot of promise for the group's future if these arrangers are still in the group; the liner notes don't show class years for any of the members, so it's hard to tell who's graduated since this album came out. (Speaking of the liner notes: original artists are credited, but songwriters and composers are not.)

One final comment: While the liner notes list one of the group members' names as "Suzanne Destio", other sites on the internet (including PandemoniUM's own web site) cite her surname as "DeStio". This review uses the spelling in the album's liner notes.