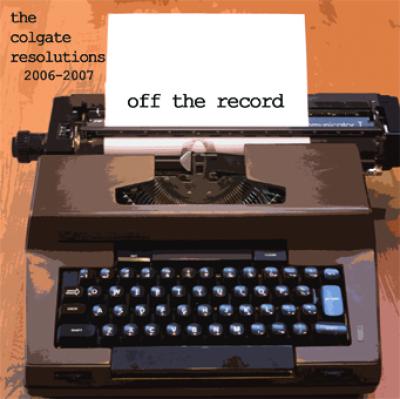 The Resolutions picked a terrible time to make their RARB debut. They've made such a dewy, optimistic album. It doesn't stand a chance compared to the state of the art these days.

Everything about Off The Record sounds do-it-yourself. This is a great learning experience, and lots of fun. It also sets you back about 15 years. Your arrangements tend to be doo-heavy and have trouble finding proper basslines. Your recording technology is ultra basic. And your tuning tends to be terrible unless you have rehearsal superpowers. I'm very sympathetic — when I founded an a cappella group back in 1993, that was pretty much how things were done. But in 2007, re-inventing the wheel has lost a little lustre. There are so many good groups out there, with widely available recordings. There are so many more resources, and so much more collective a cappella experience. When a group goes it alone, it's still a worthy effort, but the finished product is usually a friends-n-family-only affair.

Speaking of the early 1990s, the Resolutions borrowed an arrangement from that era, Gabe Rutman's instantly recognizable interpretation of the Red Hot Chili Peppers' Soul To Squeeze. It's still a cool arrangement, which just shows you that superpowers can transcend timing. Inspiration to the rest of us, I suppose.

Grooves are the best thing about the Resolutions' recording. The group has a nice sense of tempo, and most of the songs relax into themselves. Groove and soloist rescue The Joker, for example, despite terrible tuning. Cruisin' also has a good feel, and co-soloist Hanna Hyun has a terrific Aimee Mann-Beth Orton-type alt pop tone that gives the song fresh life. But when the groove deserts this group, there's not much left to fall back on. Witness the forced motion of Dixieland Delight in the Country Medley. The album opener, No Rain also drowns in its own stridency. The Resolutions would have done better to open with Strong Enough, possibly the disc's best overall cut.

Anyway, good luck, Resolutions. Colgate has a long and storied reputation in the annals of old-school a cappella. No matter where your group goes from here, I hope you have a good time and stick together. Have fun!

I listened to Off The Record, the latest album from the Colgate Resolutions, with the sense that this is their debut effort in the recording world. It sounds like a first attempt: young and simple. But The Resolutions formed in 1992, and this is at least their fourth CD.

Off The Record was recorded one part at a time, though from some of the tuning you would not be able to tell. The basses on Feel are holding a C, and it wavers in and out of tune against other parts as if they were singing live, fighting against a really tough, dissonant chord. Sadly, this is not the case. Listen to Soul To Squeeze and you'll hear more examples of this, such as the altos holding their inconsistent F in the middle of the arrangement. These are uncomplicated lines to sing, and in post-production, it is easy to catch problems such as these.

Soloists on this album are decent, but not memorable. There is some emotion and ownership of lyrics from a few soloists, but overall they are average solos. In Strong Enough, Caitlyn Murphy sounds like she is running out of air in each phrase. My biggest pet peeve on Off The Record is how Dane Hoyt starts In My Life, a well known Beatles tune. To sing the melody incorrectly in the first phrase of a song ("places I re-MEM-BER") turns me off from the rest of the tune, despite its being Dane's most innovative arrangement on the album.

Arrangements lack creativity throughout the album, with the exception of the aforementioned In My Life and Gabe (Rutman) Mann's Soul To Squeeze. Many songs have all parts on held notes, singing "ooh"s, "ah"s, "do"s or "na"s (this also makes tuning more difficult for any group). Here is a group utilizing at least four-part harmony that should have changed some lines to a counter-rhythm or switched syllables from one verse to another. Within most songs, I had no sense of dynamics, phrasing or even variations from a verse to a chorus. Notes are dead on arrival.

As an admitted novice in the technical lingo and realm of recording, what I hear is a lack of good microphones, resulting in a somewhat brash, tin-like sound throughout the recording. Cut-offs are sloppy and could have been cleaned up by the engineer. Evening Song is a perfect example of what results in stuttering of parts, such as S-S-S-S when words end at different times. The tenor section suffers throughout the album, merely because they are nearly impossible to hear on most tracks. I know canned dynamics are not desirable but they would have helped to bring out the tenors.

I wanted to like Off The Record, once opening the CD and reading the liner notes. "We are the crazy members of a family" and "It is impossible to express my love and appreciation" for everyone involved in the album was written by Music Director Dane Hoyt. From the cheerful vibe (translation — lots of syllabic "dee"s and "doo"s) of most songs, I know the members of the self-nicknamed Resos enjoyed putting this project together. I believe there was much hard work, dedication and unquestionable effort put into this album, but it is riddled with too many problems, forgettable songs and lackluster soloists to become a staple in my a cappella collection.

I applaud the men and women of The Colgate Resolutions for their attempt at creating a pleasing reminder of their halcyon days in a collegiate a cappella group. The reality of the end product that is Off The Record is something different. Hopefully, the group will be able to take the comments and criticisms provided to create a better recording in the future.

Off The Record is a classic example of ability trumping enthusiasm. The biggest indicator is that the group's overall musicianship doesn't support the artistic endeavor. The blend and tuning of the group is off from the first note of No Rain through the ending of Evening Song. I didn't notice a lot of group key changes, but at times, a vocal section will enter a phrase in one key and exit in another — independent of what the rest of the group is doing. At least the section is staying together. Sometimes, the problem is caused by improper breathing techniques, and can be fixed with group exercises focusing on intonation, listening, and vowel matching. The mouth is the major instrument used when singing, but if you aren't using your ears almost as much, it's never going to sound good.

Exacerbating the tuning problems is the balance, off through most of the arrangements. Generally, there is never enough bass or tenor, which is a common problem in co-ed groups when they record in such a "natural" way. The arrangements call for the upper voices to be exposed in ways that the group can't handle. The one exception is If I Ain't Got You — the best song on the disc. The balance is still off, but for some reason it works on this song.

Interestingly enough, when they attempt a song that calls for edgy vocals (the Off the Beat arrangement of Soul To Squeeze by Gabe Rutman), they step up their game. The parts mesh nicely and the layered vocals at the end of the song actually work. Oh, don't get me wrong, the tuning is still off and the altos and sopranos think they are carrying the song, but you can a brief glimpse into what the group might be able to accomplish with more rehearsal and attention to detail.

The good news is that several of the soloists are strong. The duet of Mike Goltzman and Hanna Hyun on Cruisin' is just lovely. Jaleith Gary's turn on If I Ain't Got You had me from the beginning and she didn't disappoint; it was understated and just this side of melancholic, making for an appealing listen. And Justin Langord seemed right at home leading the charge on one of Rutman's classics.

I don't normally advocate auto-tuning, but I strongly suggest that the next time that The Resos go into a studio, they try to take full advantage of the recording capabilities and techniques at their disposal. Doing so could take them off the record of bad CDs and put them on the map in collegiate a cappella.

For information about ordering Off The Record, please contact Dan Jedell.