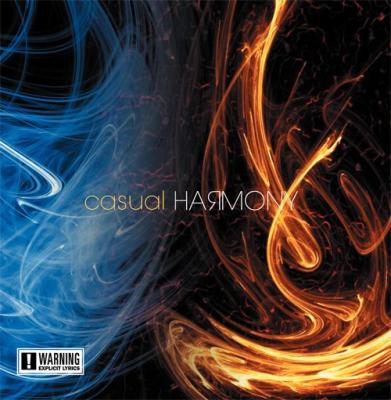 Casual? There's nothing casual about Casual Harmony. Casual Harmony's self-titled album is taut as a tiger and nearly as restless. If the moody, angsty mix of songs doesn't make you cranky, the album's busy production might.

Casual Harmony doesn't have a signature sound. Instead the group seems to strive to engineer the sounds of other groups, mostly obviously the Tufts Beelzebubs and Off the Beat. The telltale keyboard backbeats on I've Got To Use My Imagination are Bub-ly and the heavily distorted syllables that drive Paralyzer and Sober are more than merely the influence of OTB.

Casual Harmony is less creative than these inspiring groups, and I found it easy to tune out. Paralyzer, for example, signals intensity from the intro through the first chorus, but the following verse and chorus offer few variations to maintain the momentum and build the energy. The melody ping pongs between two notes, and I got bored. The first chorus of Stereo introduces a maddening mosquito-like noise that reappears throughout the rest of the song. It's grating and drowns out the nicely executed rotary keyboard effects, arpeggios, and a soloist who nails the song's style (but not its descending melisma). Jeremy clearly got less thought than other tracks. The arrangement is simplistic, filled with tenor "ah" blocks, and a defaultish "doom doom chuck" vp. I haven't heard a Pearl Jam cover in forever, but that's about all the novelty the group brought to this track. Crazy plays half-heartedly with blending other songs that involve the word Crazy, but mostly the song is sustained "ah" and (energetic) soloist. Hours of work with harmonizers and intonation just can't keep my attention during Stronger, which is just a bad, bad song.

Yet Casual Harmony demonstrates an independent potential for greatness. The toe-tappin' fun and soulful, throwback energy of I've Got To Use My Imagination had me totally groovin' to Gladys Knight, via Casual Harmony. Iris is a masterfully paced study in contrasts. The song's "sound" is consistent, yet the group and soloist make big changes in texture and dynamics and wild swings in intensity. Iris is a real journey of a performance. A cappella has thoroughly covered Dave Matthews Band's Stay, but this album's frenetic production style suits the song beautifully. The song can't possibly sit still; it's jam-packed with a confident, dynamic soloist, strings of coconutty percussion, charming not-quite-trumpet, and freakishly female backing vocals. This track makes great car stereo blasting material.

My favorite track is Existentialism On Prom Night, which features the Iris soloist in one of those rare performances that forces you to ache for more, even though you're getting just the right amount, damnit. All a cappella arrangers love the feeling of "discovering" a song that would be great a cappella. The rush of excitement as the arrangement forms effortlessly in your head, as you see the tenor lines, the harmonies, the foundation interacting. In just a few seconds, you have committed to hours arranging that song. You won't sleep until you have the bass line transcribed, your arranging hooks jotted down on paper. Arrangers cling to that moment of discovery; if they can't bottle that lightning, the arrangement won't come alive. Despite hearing this song on the radio many times, this track revealed it to me for the first time and proved the song's worthiness to be a cappella. This soloist begins the song with the nasal edginess of the emo style. As the melody rises, he just gets better and better, lifting you up to his energy level and holding a knife to your throat until you sing along. "Sing me something soft, sad and delicate or loud and out of key. Sing me anything." No doubt the live performance is a show-stopper.

Casual Harmony is a glitzy album. The production value is high, but it's so busy that it's dizzying. The panning and quick texture changes will make your head spin. I think most listeners will be impressed with the energy and engineering at first glace. For me, too much of the album had a short half-life.

Casual Harmony looks more like a football team than an a cappella group, and this time around their sound has the guts to match their appearance. Their debut album was chastised by RARB for lacking aggression, and this album is clearly Casual Harmony's answer to those who ever doubted them. Yes they can sing, yes they can rock, and yes they will steal your girlfriend. These men have definitely upped the ante in just about every area on this album. Only a small handful of details now stand between them and recorded greatness.

I don't know what exactly allowed Casual Harmony to translate their live power to record this time around, but they certainly ran just about every play in the a cappella playbook to make it happen. Hiring expert tracking engineers and editors to get the best raw sound? Check. Liquid 5th came on board and coached some superb performances. Expert a cappella producer behind the mixing board? Check. Bill Hare stepped up to offer an upgrade from their respectable but ultimately lackluster work with Mike Harmon on Score Some Harmony. Kudos to Casual Harmony for teaming up with folks who know how to get the best out of their clients.

Kudos also to the singers themselves for bringing their A game to the studio. This album showcases a number of strong, energetic solo performances. My favorite has to be J. Aaron Boykin. His infectious, slow-building energy gives I've Got To Use My Imagination just the right kick to start the album off right. His turn on Dave Matthews Band's Stay feels a bit more reserved, but still showcases a solid delivery. Noah Hercky is similarly excellent, with a voice born to cover '90s rock and emo.

Interestingly, I would argue that while Casual Harmony advertises originality as one of their greatest strengths, it is a decidedly unoriginal track list that keeps these men from shining here. Sorry guys, but you're going to have a hard time selling me on the idea that you, to quote your liner notes, "push the envelope of collegiate a cappella" with an album that includes, in order, Iris, Stay, The Sun, Jeremy, and Crazy. These songs are about as overdone as they come.

There's no doubt that this group has made some great strides forward in their recorded sound. I'd rank them in somewhere on par with the Dartmouth Aires in terms of overall quality, with Casual Harmony getting the nod for a bit more energy and solo star power. If these guys can mix it up a bit and take some more chances with their song choices I think they've got a great shot to be the next big thing.

If you're planning on listening to Casual Harmony's self-titled 2008 release, I sure hope you like music written after 1990, because that's largely what you're bound to hear. Don't get me wrong — I applaud this group of guys from Rutgers for establishing and sticking to a consistent identity. Some collegiate a cappella groups adhere to a "potpourri" mentality with their song selections, making sure their latest CD's track list covers every decade since the 1870s. But not Casual Harmony. It seems that they know what they like, and doggone it, that's what they're going to sing.

But is what they like to sing what they should sing? In this case, I'm cautiously leaning toward "yes". There are several instances where it's clear Casual Harmony is in the zone — Stay is a tremendously fun track, with lots of layers, a groovy bass line, and contagious energy. Sober features nice solo work by Ryan Aiello and tons of emotion, and I found myself captivated despite my general distaste for Tool. And I must confess that even a grouchy a cappella purist like me appreciated the Kanye West-inspired finale, bells, whistles and all, again because of great energy and a solid frontman in J. Aaron Boykin.

There are other times, unfortunately, when the songs sound forced or uninspired. I found the Pearl Jam cover kind of hard to listen to, because soloist Ryan Aiello, while he has some nice chops, seems to be trying a bit too hard to imitate Eddie Vedder. It doesn't really work, and I suggest to anyone reading that if you can't do the original singer justice, then try to make the song your own. Conversely, Paralyzer has nice frontman, but the block seems to be a bit of a "jah" powerfest. The arranging on this album is mostly pretty strong, but in this case we don't seem to have a fully realized chart.

I also wonder how many years it'll be before we stop seeing Crazy on collegiate a cappella repertoires. Casual Harmony's version features a strong solo and an innovative arrangement, but it seems kind of mechanical and uninspired, especially when compared to some of their other tracks that have off-the-wall enthusiasm.

These quarrels aside, I did enjoy listening to this album. These guys have great energy, strong frontmen, and some truly interesting arrangements. Is it ground-breaking? Not really. Nothing here is etched in my brain, and nothing will make me call over a friend and say, "Come here, you have to listen to this!" But Casual Harmony is solid enough for one or two listens through, and a few tracks might make it to your iPod. Oh, and bonus tip: If you want to steal the first two measures of their Iris arrangement, it's on the CD tray. Shh.