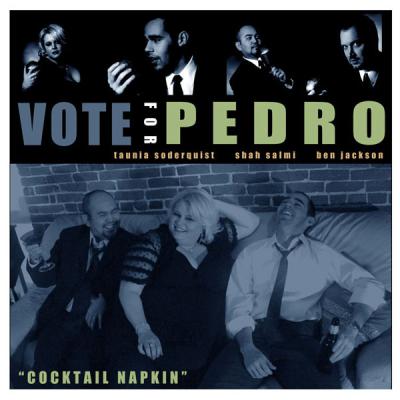 Vote for Pedro's EP release Cocktail Napkin is too short. That's pretty much the most negative thing I can say about it.

Truth be told, my very limited prior exposure to VFP had established them in my head as one of those "comedy" groups who are gifted musicians but who are ultimately less interested in the music and more interested in getting laugh. Cocktail Napkin — a delightful name for such a brief yet intoxicating collection of five songs — set me straight. These folks are the real deal: terrific singers, gifted songwriters, comfortable in a variety of musical styles and oh yeah, pretty funny too. Taunia Soderquist is unquestionably the standout as the author and soloist on the CARA-nominated opening track, soloist on the CARA-nominated second track (when she lets loose that belt, look out!), and once again author/soloist on the closing track.

If there are quibbles to be had, it's perhaps that their background development is a bit lacking at times. Four people is not a lot to work with but, especially given the overdubs on this CD, I would have hoped to have heard a bit more variation as the songs progressed. Cool Kidz is probably the best example as it features an initial groove that barely strays from its original statement. The same holds true for Tall, Dark & Handsome but as a novelty/comedy song, it's perhaps more excusable (less so a few of the forced lyrics/rhymes even as chuckle-worthy as they are).

Would that I knew if VFP had a full-length CD in store (perhaps called Dinner Fork? Salad Spoon). If the answer is yes, you can probably save the $7.00 + $2.00 S&H for this all-too-brief release. But if there are no new recordings planned for the near future, treat yourself to this charming, smooth concoction and you won't be sorry.

I've been curious to hear an album from Vote for Pedro since 2005, when the group chose its name to honor a certain fictional high school nerd. I suppose the name selection worked as a marketing move, at least in my case, and on Cocktail Napkin I see reasons for the group's infatuation with misfits. Cocktail Napkin has all the slick production of a big time political campaign, but much of the content is more befitting a group of outcasts.

Do You Trust Me, with its vocal band style and pop music songwriting, is a song that the cool kids might listen to. The song drives pleasantly forward, based on an "oo oo oo ooah" backbone and with a groove reminiscent of vocal bands like The House Jacks. Taunia Soderquist leads the song with verve and a truly excellent voice. A rapped interlude helps break up the song and adds some male perspective. It's no small compliment to say that Do You Trust Me uses every voice well, makes no musical offense, and is a solid all-around addition to original a cappella music.

Summertime is a little weird. The song begins as if sung under the surface of some astral swimming hole — its first verse is dragged out, drugged up, and disconcerting, with some "cosmic ray" delay and verb effect rippling back and forth. Taunia's voice is miked as close as possible. The chorus begins with parallel fifths on "ah" until an ambient drumbeat pushes the song forward. A tenor scat section burns through the bridge. Taunia sings widely, smearing words all over her soul range. This arrangement takes some getting used to.

Cool Kidz is lame. The song is vapid, with junior high lyrics: "'Cuz I'm a cool kid…from 1999. I'm livin' in the past…but I don't really mind, ‘cuz I'm a cool kid. // Yo, all my clothes baggy. I got nuthin' tight. That's what the cool kids do." Cutting satire it ain't, and I imagine seeing this song performed live would make my skin crawl about as much as getting "pantsed" in my 7th grade co-ed volleyball gym class (I was not a cool kid).

Cocktail Napkin is cool, breezy jazz, lounge-lite style. The blend, mostly Taunia and the tenors, is smooth as easy listening jazz could be. The song is full of fun, dissonant chords and meanders about the scale on a casually delivered "buhp, bahhh dup". The male lead's voice is like liquid smoke, silky and gray, and the rhythm section punctuates his fluid lines beautifully with slap bass, closed hat, and woodblock. This is textbook lounge jazz. Taunia, proving she can make her voice assume any timbre she likes, interjects a loose scat bridge.

Tall, Dark, & Handsome is a waltzed lament about [SPOILER ALERT] the curse of the diva: gay boyfriends. Intentionally or not, Taunia's delivery is very Julie Andrews in The Sound of Music (a popular gay singalong, I'm told). There's not much to say about the song; it relies on gay stereotypes and a quickly waltzed "buh duh duhp".

Vote for Pedro seems as quirky and awkward as its eponymous heroes. Cocktail Napkin is musically robust, performing a genre-bending array of a cappella-friendly styles with panache. Yet I'm not completely convinced. A longer album with a more coherent platform might help to win my vote.

To me, there's only one good way to describe this awesome EP from Vote for Pedro: smooth. Delicious and delectable, full of pop and jazz sensibilities and appealing to a wide audience, Cocktail Napkin has something for everyone. A rockin' beat, four original tracks that could easily be heard on any Top 40 radio station, and an old school favorite done up to the extreme with not a hint of messiness, boredom, or blandness.

Opening up the album is Do You Trust Me, a head-bopping, Taunia Soderquist-penned and -led number, but without all that sloppy remixing and overinstrumentation. I particularly like the clean rhythm and the beat-driving bass, along with the vocals over percussion in the bridge. Soderquist also leads the re-invention of Summertime, demonstrating a vocal range any female would envy. This is the piece that exemplifies the monster power of Vote for Pedro, with difficult dissonant chords, a complex rhythm section, and not-to-be-taken-lightly scat section performed by one of the male group members (uncredited). Like "Stand by Me" on Blue Jupiter's break-out masterpiece Ear Candy, Summertime stands out as one of those a cappella innovations that will be remembered as genre-bending and breakthough.

Ben Jackson's beats fill the album with a vibrance that is echoed in spot-on background vocals and an energy that makes the vocal space sound much bigger than the mere three voices on Cocktail Napkin. His lyrics on Cool Kidz are a bit contrived, and I get that it's supposed to be an homage to the 90s, but his performance and the studio production are a better throwback than the actual words he's singing ("I carry a two-way pager … ") His samba beats create an effective background on Cocktail Napkin, easily my favorite track on the album. With Shah Salmi's dead-sexy tenor lead and Amy Malkoff's great lyrics, this piece comes off with soul and sultriness, and I can't help but want to pull my boyfriend off the couch and dance. The album's closer Tall, Dark, & Handsome pays a vocal tribute to Bette Midler's Otto Titsling in "Beaches", and fares almost as funny. I won't give away the punchline, but suffice it to say that it's full of drama and executed quite well, even if the arrangement gets repetitive after a while, which can be forgiven since the story is the focus of the song.

Cocktail Napkin is an apt title for this first release from this Boston group, comprised of seasoned members of the Boston vocal scene. It's an appetizer, a taste of something yummy and interesting, and at seventeen and a half minutes, it leaves you wanting more. Whether you like a smooth scotch or a fruity mixed drink, Vote for Pedro will have you licking your lips to come back for a second imbibing.