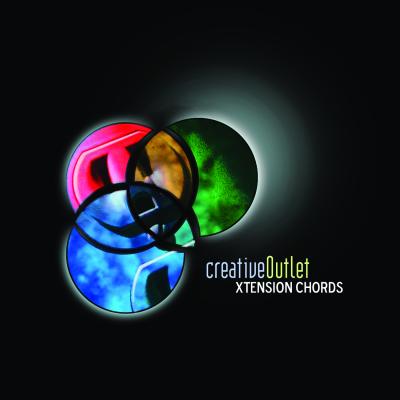 The more things change, the more they stay the same. The Xtension Chords of today don't sound that different from the XChords of 2003, or for that matter 1995 (I was reviewer number 3). They still sing nice, they're still funny and they still don't blow me away. But they have kept up with the times. This new album is tuned up as only a modern studio could manage, and the main underpinning cultural aesthetic is now self-deprecating nerd instead of campy musical theater devotee.

Mr. Creepy Facebook Stalker Guy is this year's funny original, and it is quite funny. And quite well performed. Good job, gang, and I am so glad you haven't given up on writing your own material. The rest of the rep is pretty standard, hugging the average to above-average zone for college groups through the years. The Xtension Chords get extra credit for leading off with their best song (Just The Girl is pretty fun) and also for picking good soloists. I liked Brian Thoman on the title track, Andy Anderson on Drift Away and the Gone duet in particular, but pretty much all the leads are suited to their material and turn in credible performances.

I also applaud the way the group brought in outside help. These guys offer up several arrangements from other groups without apology and without butchering them. This group made smart, likable choices (the UNC Clef Hangers's take on Take Me Home Tonight, the Virginia Gentlemen's chestnut Insomniac) and I liked their approach. I Love Illinois (Keep Your Crummy State) deserved its reprise (great cheering, Rip Chords!), and it's still good. And hey, there's Gone, a House Jacks cover. Remember the House Jacks? They rock, and thanks to the Xtension Chords for giving me an excuse to remind you to buy all the House Jacks's records if you're into a cappella rock and roll and you haven't already.

Overall, Creative Outlet is a smart, funny album that makes the most of what it has and does the XChords credit. It's a big accomplishment to keep up this kind of standard over a dozen years, and they should be proud to be in step with their past.

I'm very torn about the new Xtension Chords release, Creative Outlet. Two things are very cut and dry for me as to what I really enjoyed about this album. One, the soloists sing in a way that makes me want to befriend them as individuals, and I really believe they are thinking about the lyrics they sing and how they should sing them. Two, the production. Sure, when hiring Bill Hare, Tat Tong and James Gammon to engineer your tracks, the end result will almost certainly be polished, tuned, and technically excellent. Nothing is over-sweetened or produced in a way that makes you think "who could actually sing this?" - a production value I always admire. However, I didn't understand the purpose of having one "live in studio" track. Were they trying to prove something? It's clearly the weakest song in terms of production and exposes some of their flaws.

But the rest of the elements of Creative Outlet caused my opinion of the overall album to change from day to day and mood to mood. Any avid music fan knows certain albums set a mood, cause one to reminisce, or evoke emotions depending on the song. My reaction was a roller coaster. In college, I saw the Xtension Chords perform and remember them as wholesome, cheerful singers. I don't think much has changed since I graduated 8 years ago. Listening to this recording, here's the visual I see: a lot of clean-cut, youthful men with pearly white smiles, wearing suspenders, doing a "step touch" in rhythm to every song they sing. (They never had this formula — I don't want anyone to think I actually saw them do this at a performance). It's a nice visual from time to time, but after a while, the sound gets old for me. I simply wanted more variation. Too many songs (Just The Girl, Eye 2 Eye, More Than Words, Falling For The First Time) are happy-go-lucky songs in G major, mid-tempo, and do not leave a lasting impression that is good or bad. There's no lasting impression at all. Just a lot of "listen to the nice singing" where nice isn't necessarily a great adjective.

The Xtension Chords' web site alludes to their "favorites" like Take Me Home and their I Love Illinois songs. Clearly these are perennial favorites amongst the group and its fans who graduate every year, but I wasn't sure of the greater audience outside these two demographics. Overall, there are very good elements in their arrangements, their use of dynamics is definitely believable but there are a few hiccups like weaker soloists (My Name Is Jonas — I thought the balance of Ed Vettel against the group was off and he seemed to be reaching a bit for notes) or emotionally flat songs like Drift Away. The X-Chords have one definite sound that they do well, but it's not enough to buy the entire album (a track or two would suffice) — it's a case where the digital world can hurt you.

It's been more than four years since I reviewed the XChords' Rollin' Up the Sleeves so it's a whole new group. Comparisons to the Chords I once knew are not terribly appropriate or even fair. Still, when so much of what one remembers fondly of a group seems to now be absent, it's hard not to be nostalgic and a bit disappointed.

The Chords of old were far from flawless, but especially on the aforementioned 2003 effort, they had a wonderful ensemble sound, a reasonable amount of sophistication and/or variation in their arrangements, a couple of knock- your-socks-off soloists, and a quirky repertoire peppered with a healthy dose of humor. On Creative Outlet, the present day ensemble — 12 members strong (don't let the 21 names in the liner notes fool you) — comes off as a milquetoast version of their former selves. It's their predecessors' group as seen through a filter of "blah".

If anything, it's the nice ensemble sound that has come closest to being preserved intact. On the plus side, it's a ringing, pleasing blend, but with arrangements that so often have them singing block chord harmonies in unison, the accomplishment is not terribly impressive. And those arrangements are arguably the album's greatest weakness. Say what you will about Kestutis Daugirdas but he knows how to create a perfectly serviceable arrangement of a mid- to uptempo pop song. If that sounds like damning with faint praise, it's purposeful. "Formulaic" is the best word for his six arrangements (plus one shared credit) out of the ten new arrangements heard here. Indeed, there is so little going on beyond unison chords/rhythms and word echoing in the background block that I found myself struggling to believe 12 gents were even singing (or needed) on most tracks.

In the solo department, there isn't much positive or negative to report. It's very rare to hear an album where not one soloist distinguishes him/herself for better or for worse, but here it's a steady lineup of okay bordering on good but not great. Ditto for the repertoire which might still meet the standard of "quirky", but it's definitely not all that exciting. Truth be told, though, it all comes back to the arranging. Whatever uniquenesses might distinguish a Keith Urban song from a Weezer song from The Click Five from Eddie Money are lost in the unimaginative palette that has been used to paint the material.

I always marvel at the "dynastic" collegiate groups that have managed to maintain their incredibly high standards of performance and recording for years on end, but I suspect that the XChords are victims of a far more common scenario. Students come and students go and a cappella rock stars — be they singers, arrangers, soloists — don't come along every year or even every four years. Depressing to be sure, but perhaps also a source of hope that in four years, I'll be able to once again sing the praises of the guys from Champaign-Urbana.