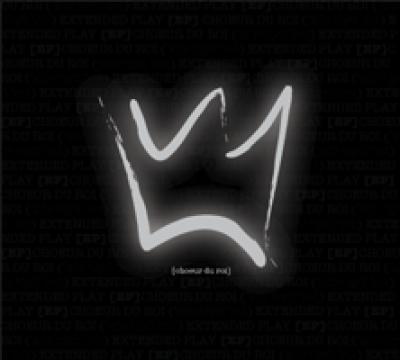 Choeur du Roi's self-titled EP, its fifth release, is the first I have heard from this co-ed group from the University of Richmond. They present a polished, professional project that piqued my interest but didn't send me over the top.

The album starts pretty well with a couple of bang-up arrangements from Matthew Giles. Production is rich and full, soloists are well placed and sing with feeling, and there are some especially nice guitar effects. I was also impressed by the dynamics and emotion Choeur du Roi throws into these tracks. If only the rest of the album could have kept up this quality.

Starting with You Oughta Know the album starts to lose some of the oomph. Arrangements aren't quite as great, the performance loses some energy, soloists aren't as proficient and it seems like heavy production (and especially heavy percussion) is employed to cover up the occasional mediocre singing. I would like to commend Reynolds Chapman on an almost dead-on imitation Billy Corgan imitation on Tonight, Tonight, but is Billy Corgan really the kind of singer you want to emulate?

I'd like to echo what some of my colleagues have said in recent reviews: in general the quality of a cappella albums has improved across the board so dramatically in recent years that no longer is a well-arranged, well-recorded and in-tune album going to garner tremendous praise. It really takes an incredible synergy of every aspect of the performances and engineering to make a true stand-out album, and Choeur du Roi just isn't quite there. It's not that there's really anything wrong with the album, but not everything is 100% right either. I think the EP format will become increasing more popular in a cappella in coming years. The upside is groups, especially college groups with huge turnover, can make a better, cheaper product faster. The downside: it doesn't allow the group to achieve a true depth, and this recording is no exception. There could be some great things from Choeur du Roi in the future once they find their voice, and I look forward to seeing something full length. Until then, this EP teaser will have to suffice.

A wise man once said, "You never get a second chance to make a first impression." And to run with that cliché for a bit longer, Choeur du Roi's new eponymous album is head and shoulders above all other albums from groups I've never heard of before. Compact, concise, and quite easy on the ears, these seven little tracks are bright and full of energy, with a dynamic range of performance and arrangement skills showcased throughout.

It's not just the pop sensibility of the album that excites me; there have been plenty of bubblegum a cappella albums that have come before that have been less than stellar. It's the mastery of this genre that impresses, from the sweet and haunting — yet still rocking — Let Go all the way through Every Little Thing She Does is Magic (a song I had secretly wished five years ago would retire itself). Each piece demonstrates development and expansion, from small and intimate to wide and soundscape-ish, with huge variation appropriate to each song. Let Go's bridge, for example, plays with vocal texture, pitting the solo against a soaring bass and rhythm with altos providing the chord movement. Of course, there's nothing really original about Let Go anymore, but the piece heard here is just as stirring — if not more so, due to this complex, multilayered, all-voice orchestration — as the original, and that's why it moves me after umpteen a cappella renditions.

(I Just) Died in Your Arms Tonight might have had the tendency to be more camp than serious, but effective use of studio effects gives a sincerity to the song that might have been lost with a different arrangement. Died in Your Arms doesn't carry the same maturity of arranging skills as the previous track, and might have benefited from additional tenor and alto parts to fill in between beats. April Junta does well soloing on a bitchin' version of You Oughta Know, and the chorus is fleshed out with great cymbals and excellent use of the low altos. In the second verse, the basses come in with a new rhythm that fills out the piece nicely. Of particular note is Matthew Giles, who both arranged and performed the fantastic percussion on this track.

Only I Want to Come Over starts off strong and weakens slightly as it goes on. While it follows Arranging 101 rules (start off quietly with minimal bass and percussion; use a sultry soloist to catch the ear), the creative use of the sopranos as the song leads into its first chorus culminates in a disappointing eighth-note "bum-bum-bum-bum-bum-bum-bum" with all parts sans sopranos on the beat. It's an unfortunate turn in the wrong direction for a song that had such potential, especially from a group that caught me completely off-guard. Collide drags slightly and throws a tiny curve ball with the sopranos doubling the solo for the first three notes of each line of the chorus, but the mezzos offer a nice harmony in each line's completion.

Despite its few shortcomings, Choeur du Roi is a nice change from all of the albums I get whose group members think that quantity also equals quantity. Not so, my friends. Take heed from Choeur du Roi (oh, and it definitely took me five weeks to figure out how to pronounce it) and make your precious tracks the best they can be. These University of Richmond kids know that first impressions count, and they've left a good one. I can't wait for the next go-round.

Choeur Du Roi advertises themselves on their new self-titled EP as "the University of Richmond's oldest co-ed a cappella group". Since they were founded in 1995, it would seem that co-ed a cappella is a relatively new thing on their campus. Nevertheless, a quick listen through some of their previous work reveals that this group has always had talent, if not the production values to let it shine. Newly teamed with none other than Dave Sperandio, Choeur Du Roi has taken a big step forward and has made a play for some serious a cappella recognition.

If nothing else, Choeur Du Roi and Sperandio have the guts on this album to make some bold and interesting arranging and production decisions. Examples include the abrupt ending of Let Go and the haunting guitar riffs and harmonies that create the atmosphere of (I Just) Died in Your Arms. Some of them I enjoyed, others not as much, but I respect the hell out of both group and producer for being willing to try some new things with old songs. The result is that beyond the album simply sounding good, I can actually hear a distinct, tight, electric style beginning to form. I think that bodes really well for future recordings from this group.

Okay, so all that aside, how's the singing? Good, but not great. Backgrounds are pretty well sung, decently energetic, and effective, due in part to the aforementioned production choices. Solos are good, but a little off overall. There are a lot of good moments, but many of the leads have issues with phrasing and staying in the pocket. Let Go serves as a prime example. Soloist April Junta has a gorgeous tone and strength in her higher register, but her delivery rushes and lacks the gritty emotion of Imogen Heap's original vocal.

I liked this album, and I applaud Choeur Du Roi for taking chances and making real progress on their sound. I didn't love all of their musical decisions, but I could say the same of most groups I've heard, and I respect the fact that the choices here are sound, deliberate, and confident. I hope that Choeur Du Roi continues this trend on future recordings, and I look forward to hearing more from this ensemble as they continue to move forward.