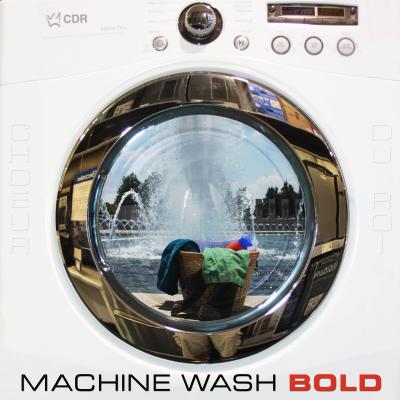 Richmond State of Mind (set to New York State of Mind) is a telling opening to Choeur du Roi's Machine Wash Bold. The campus-specific lyrics are insider-only and the average RARB reader won't relate, won't laugh, and won't appreciate the choice. It's like using a secret handshake at the start of a job interview.

But of course, this album might not really be aimed at all of us, but at the home crowd. And for that target, the devoted alma mater, it's a winner.

Machine Wash Bold is everything a solid yearbook album should be. It's got variety and energy. The spotlight is shared among almost as many leads as there are tracks. The production enhances and tidies but still displays the group. The songs on the album are crowd-pleasers and don't ask too much from the leads that they aren't able to muster.

The rest of the aca world will find this release listenable, but predictable. Standout leads get the credit for higher scores. The back-ups range from cut and paste dullness, to moments of real artistic phrasing. But even the least exciting arrangement still displays command of all the basics: the chords are right and in-tune; the percussion sounds like percussion; the mix lets the lead stand front and center.

The future of a cappella achievement no longer lies in accuracy or even in slick production. These elements, despite the great efforts involved in achieving them, have become standard. Groups like Choeur du Roi must distinguish themselves through originality and bold musical choices. Machine Wash Bold is a fine listen, but falls short largely because there's nothing bold about it.

This is probably an album you've heard before. Well, not this one exactly, but one just like it. Let me explain: at its best, Machine Wash Bold is a collection of accurate covers of songs you know pretty well. They key word there is "accurate". When the soloists are great and the raw background singing is strong enough (and engineered just right), then these songs are basically decent reproductions of the original tunes. When the stars don't align, things are pleasant, but noticeably mediocre.

Is this sounding familiar? Choeur du Roi has fallen into an increasingly common trap in the collegiate world; namely, they rely too much on soloists to carry the music. It's really noticeable when a soloist isn't quite up to the task because, honestly, it's the only thing making or breaking the track. There's not much else to listen to — not much in the way of emotional contrast or dynamics, no inventive arrangements, no surprising song selections, nothing at all out of the ordinary.

My advice would be to start with the arrangements. Syllables feel limited to the basics ("doo", "doh", "bah"), which I think is actually hindering the group from singing with enough contrast in its tone. For example, the go-to syllable for quiet moments seems to be "doo". How about "dm"? Especially for basses, this allows for a greater range of expression, and more delineation between the lowest voice and the higher octaves. I Will Follow You Into the Dark is a perfect example of a song that should have more emotional heft, but feels stuck at one level thanks to a steadily chugging "doo" syllable that hums along in most of the parts for most of the song. This group needs to experiment beyond the basic syllabic timbres in order to find a greater freedom of tonal expression.

I'll bet this is the hundredth time I've said this, but you can't do the same dozen songs that every other group does without changing them in any significant way and expect a good review here. The songs on Machine Wash Bold are especially all over the map. The group spins us through Alternative Acoustic, Earnest Pop, Modern Soul, Pop Rock, and Hip Hop before the listener has a chance to breathe. These styles don't really hang together well, and as such it's pretty obvious that these songs were just chosen for their popularity. Again, not out of the ordinary for a collegiate album, but still a roadblock to greatness.

Ok, no review would be complete without a few positives! The percussion is good — kudos to James Gammon for some nice work in that department. Groove is for the most part pretty solid, and generally I like where the bass sits in the mix (it's noticeably vocal, but unobtrusive and supportive, except in instances where the arrangement exposes it poorly like the aforementioned I Will Follow You Into the Dark). These things are pretty much all on the production side of things.

Choeur du Roi needs to bring stronger raw material to the studio for its albums to really hit the next level. Again, I would start by trying news syllables with the goal of being tasteful and expressive, not flashy. This will allow for greater emotional contrast between songs, which will start to make each tune feel more distinct. Mix in some less tired, more unified material, and it will be a great step forward!

I find it compelling that my summary gripe with the album, almost word for word, appears in Tom Czerwinski's review from 2007: "...the quality of a cappella albums has improved across the board so dramatically in recent years that no longer is a well-arranged, well-recorded and in-tune album going to garner tremendous praise." I thought that this was a recent, perhaps year-or-two-old criticism, since I hadn't really heard it pop up in the community at large before the last few festivals I attended. Apparently it's been around longer than I thought. This shouldn't really be a surprise, since it's a basic critique of the music industry in general — people were/are sick of the mechanized, industrial, "perfect" music of the '80s, and so along came grunge in the early '90s. Likewise, I expect something similar to come out of the a cappella community in a few years. Or, at least, I hope so.

I'll jump back down off my soapbox now, and talk a little more about CDR's album. For starters, the opener didn't make me all that optimistic. Of all the songs on the album, it seems the least polished, the least edited, and the least cared for. It did, however, give me an excellent preview, editing mishaps aside, of what to expect sonically from the rest of the album. Soloists are serviceable if not particularly interesting, backgrounds are clean and shiny if not particularly emotive, and percussion is uniform and punchy if not (for the most part) particularly human.

There are notable exceptions, such as the percussion sound on Glory Bound and the lead on Fallin', but such exceptions never seem to occur at the same time. Often, all of the problems crop up at once. I Will Follow You Into the Dark is notable in this respect — the arrangement is almost exclusively "doo" and "dah", the lead is not particularly engaging, and nothing really pops. Nothing is wrong with it, but nothing goes particularly right either, and so a song with source material rife with potential is squandered.

The album seems very much a collection of songs, sung well but without any particular intent, cobbled together without much thought to order or program content. It is resoundingly OK, and probably a fun retrospective for the group, but not anything particularly worth purchasing for those who don't already have a love for CDR.

To order this album, please contact Sam at sam.abrahams@richmond.edu.