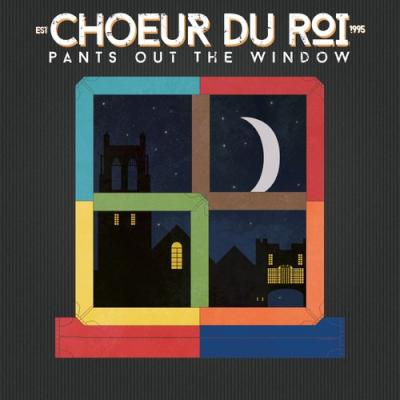 Pants Out the Window is certainly of the funky, fresh, and fun variety. But it's difficult to be a totally satisfied listener, due to some curious programming choices and musical outcomes.

Tightrope is brilliant. The song starts full-throttle and never lets up, with a confident and sultry lead from Lucie Dufour and plenty of kick from the backs. It's clear we're at a party, and our hosts are awesome.

Daydreamin' On, a mash-up of Daydreamin' from Lupe Fiasco and Dream On from Aerosmith, is unexpectedly smooth and elegant. I say "unexpectedly" because around here, we're accustomed to the mash-ups and medleys being the most problematic, but guess what? All three on Pants Out the Window are compelling in their own ways; this is one of the curiosities of the release (obviously in the plus column). Also, since the arranger for the three (Rachel Templeton) can handle ironing out tricky transitions and integrating covers this effortlessly and beautifully, then heck, I hope she's using her post-collegiate life to pump out original jams because she obviously has enough vision and skill for impactful music. "Sing women!..."

Two of the songs (Tightrope and Spectrum/Say My Name) had a professional arrangement grooming from Tom Anderson through his editing service, and one can really tell; they're tidy and crisp with a solid undercurrent the whole way. Unfortunately, this also makes the weakest track for me, The Wrestler, pale as a result, with its more hollow arrangement and wobbly soloist who is channeling Bruce Springsteen but isn't quite there. This leads to another curiousity: a "2" and a "5" on the same short album.

And now for the final curiosity: was the second Tightrope necessary? The second version amounts to about thirty extra seconds of music, so my vote is no. There are skilled arrangers here, and a solid ensemble with plenty of musicality (especially evident in the tenderness and lovely line shaping in Kiss Me Slowly), so I say, why not something bold to close out the show instead of an extended cut of the opener?

Pants Out the Window is uneven in its presentation, but in case my opening statement needs repeating, it's certainly fun. Give it a spin and see what grabs you.

When you look at Pants Out the Window from a primarily production perspective, the project is solid. Choeur du Roi, of the University of Richmond, tackles each song with remarkable vocal precision and demonstrates that the studio process should act as an extension of a well-sounding group, not define it. But while the Chords (as they refer to themselves on their web site) have a tight-knit sound, no amount of studio work can create passion, which is what Pants Out the Window occasionally lacks.

When listening to Pants Out the Window, I was not able to fully appreciate the whole package until I arrived at the halfway point. It is here that the Chords deliver a conviction that is missing from the opening tracks.

Tightrope has highlighted moments as vocals drop off then kick back in with enthusiasm, along with an unexpected breakdown in the bridge that's pleasing to listen to. But there is little variance between the first and second verses, with energy throughout remaining too similar, at times drowning out the soloist. An overall shift in dynamics is an easy fix for this song. As for Tightrope (Extended Cut), I wish the Chords had only kept one full version instead of having two of the same song.

I really enjoy the concept of Daydreamin' On. The foundation of the Aerosmith tune is maintained under a steady urban groove with a cool rap solo. I wish the build-up occurred sooner and stayed longer to really produce something great. Heart A Break/Battlefield is a good upbeat selection that smoothly transitions between the two songs, but this is another track that could use a bit more variance in parts, mainly the lower voices.

Kiss Me Softly is where the Chords find their bearings, as the bare opening has a strong effect. Success is further achieved as the backing group's energy builds with the lead throughout. The Wrestler exudes an almost reflective sense that captures emotion really well. The arrangement is well-done with layering that keeps the listener interested in everything that is being performed.

She's So High is my favorite track simply because it accomplishes a feat that very few songs ever do: perfectly recreating the original song. To me, this selection has the Chords written all over it — from the '90s pop rock vibe to the intensity needed from each vocal part to make a statement.

Spectrum/Say My Name would have been a great closer as it is the most intense delivery from a lead throughout Pants Out the Window. Both leads offer a unique delivery that fits each of their respective songs and the Chords are able to capitalize on dynamics, especially in transitioning to Say My Name.

While it does take a little time for Pants Out the Window to find itself, the Chords have a well-balanced sound that just needs a little more definition. They are not too far off the mark from having a killer album.

A group called Choeur du Roi and an album called Pants Out the Window; I had no idea what to expect. It turns out that I should have expected pop and R&B with a lot of musicality, performed by people who are full of energy and who love to have fun. Pants Out the Window offers a fair mix of songs, but they all feel like they should be next to each other on a track list.

What's cool about this album is that the group seamlessly mixes hits from yesterday with hits from today, like a radio station — but better. Daydreamin' On brings Aerosmith and Lupe Fiasco together to set the tone for songs like She's So High and Tightrope. The arrangements are dynamic and provide full immersion into the style of the original, yet you still enjoy the benefits of them being voices only.

The blend and balance is spot on. Percussion and bass are full without being overpowering. The soloists completely commit. If I were to offer any real critique, it would be that Tightrope starts out of nowhere and is a bit jarring. Also, while I love the energy of Heart A Break/Battlefield, it's a little too musical-theater sounding for my liking. Finally, I'm not sure Tightrope is strong enough to be worth reprising, though I do approve of bookending things. It's like Orson Scott Card's M.I.C.E. quotient applied to creating an album.

The Wrestler needs special notice, since it stands apart from the rest of the album but works fantastically. It isn't super polished, but the raw quality lends it more power. This whole album is very strong, but in my opinion The Wrestler alone makes this a worthwhile purchase.

Pants Out the Window is a solid addition to your collection.