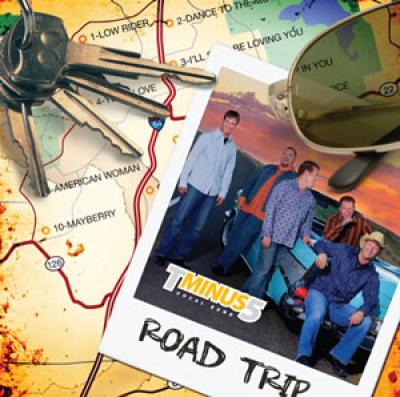 T Minus 5 has confused me for some time. I last commented "T Minus 5 calls itself a "vocal band" on the cover of Purity, the group's latest release. On no planet, in no drunken haze, and under no amount of torture can I imagine calling this 5 man Christian glee club a vocal band." But that album was Purity. On Road Trip, T Minus 5 is stretching their sound a bit. I might even be persuaded to call them a vocal country band. Or a vocal soft rock band. And, Patriot Act be damned (no, seriously; damn the Patriot Act), I'll say so without simulated drowning or electrical stimulus.

I think the essence of T Minus 5 is best revealed on When I'm 64. "Will you still be sending me a Valentine? Birthday greeting? Bottle of wine?" is a familiar line of the Beatles classic. T Minus 5 has replaced "wine" with "milk". There could be many reasons for this. Perhaps they don't promote drinking. They sing for young kids. They thought the change would be cute. Whatever the reason, that change to the most sing-songy of the Beatles tracks is very T Minus 5. They kinda rock, but never, ever too hard. They like rock songs, it's true, but they also like open, covered vowels and vibrato, and that combination often leaves the listener unconvinced.

But T Minus 5 knocks it out of the park when they are themselves. Country songs like Wrapped Up In You and Mayberry are just what they ought to be: down home, rich, genuine. The gospel influenced He Still Loves Me the Barry Manilow classic One Voice and particularly the lush, theatrical Christian-overtoned Show Me the Way are exactly the vocal showcases T Minus 5 should have started Road Trip off with. This is what we'll listen to again.

Road trips can be great fun, friends going places they've never been, but they're all the more memorable when you return from them having found out something true, something about who you really are. It may be that T Minus 5 has done just that.

When last I contemplated the music of T Minus 5, it was late 2004 and Purity was a well-intentioned disappointment. Flash forward a few years and the wrapping paper has been significantly upgraded, but the product itself is very nearly and unfortunately the same.

In a nutshell, slick VP, an octaved and/or processed bass, Bill Hare and Tat Tong do not a good album make. That's the wrapping paper I was referring to and it's lovely. With the exception of Show Me the Way, there is plenty of thumping bass and percussion to go around (occasionally too much — see: Your Love) and every track features the bright, shiny ringing blend we've come to expect from the aforementioned master a cappella mixers (though the group should be given its due as well since blend has always been something T Minus 5 does very well).

The trouble is that beyond the bass, the VP, and a tight, crisp sound, there really isn't all that much going on here. Arrangements stick primaily to ooh-ahh block chord background or word-echoes in harmony and unison rhythm — think early Blenders and/or Rockapella (Your Love has a particularly nostalgic Sean Altman-esque feel about it) Good company to be in, of course, but a cappella has come a long way in the last 10-15 years and too many other outstanding pop a cappella quintets have demonstrated how much more interesting and engaging five voices can be. There is also very little in the way of development to be found within most of the arrangements — once you've heard a verse-chorus, very little is likely to change; bridges are offered with little "build" to the final repeated choruses, and song endings, when not monotonous fadeouts (I'll Still Be Loving You) are downright uninspiring (When I'm Sixty Four, Mayberry, et al). Soloists are enjoyable without ever being remarkable and the group's preference for keys and chord spacings that sit solidly and consistently in the middle of their vocal ranges offers little opportunity for vocal pyrotechnics. Song choice is also a bit of an issue as tracks like Low Rider and American Woman don't excite beyond the replication of their instantly recognizable opening riffs. He Still Loves Me reflects the group's deep spirituality but ultimately is a bit of a bore that just sits in the same place for most of the song. One Voice is beautifully harmonized, with a nod to barbershop at the end, but it's a glee club-style song given a glee club-style treatment and I just wanted more from these talented gentlemen.

Even after so much faint praise, however, the truth is that a casual a cappella listener still might thoroughly enjoy this album. So there's the rub. If you're just looking for a fun listen that doesn't require much of your attention — background music for a long car ride — Road Trip might be a worthy (and apropos) addition to your collection. If you're looking for sophistication, variation and innovation, look elsewhere.

The dudes in T Minus 5 look like they could end me in a bar fight, were they so inclined. If Road Trip is any indication, they are not so inclined. This men's quintet from Nebraskaville (or something ... the liner notes don't say) has all the trappings of a state fair act the whole family can agree on. Solid singing, inoffensive soloists, masculinity with a softside. A little bit country, a little bit rock and roll. Aunt Lil will love it.

Road Trip begins with a rendition of Low Rider that is neither compelling nor indicative of what is to follow. The soloist (whoever he might be ... the liner notes don't say) is ineffective, though he doesn't really have much to work with. I didn't enjoy Dance to the Music at all, and I can't see why I should. Side note: if your bass announces that he is going to "bring the bottom" he had better, you know, bring the bottom. Just sayin'...

In general, this album spends a bit too much time trying to sell the genre. T Minus 5 is a bit too content to imitate guitar, bass and other sounds and call it a day. The solos play it safe to say the least. As a result, a number of the tracks simply begin and then ramble for a spell before concluding, sometimes abruptly.

There are some curious production choices here, perhaps a function of the desire to impress. American Woman spends way too much time on a banal guitar solo run through a processor. Their rendition of Barry Manilow's One Voice is so overwrought it renders the title ironic.

Ironically, too, the vocal percussion is solid and unobtrusive throughout, lending some much-needed whimsy to When I'm Sixty Four. In fact, the whole group navigates this tricky, King's Singers-esque arrangement with aplomb. In general, the last four tracks seem to hit the right folksy sweet spot for T Minus 5.

Alas, the group too frequently veers into curious, indulgent missteps. I don't know what Midnight Daze is trying to do at all. Credited as a "special mix by Ryan Boud", it's a malaise of sounds posing as a song. If Ryan Boud is a fourteen-year-old skateboarder, this makes sense. I am unmoved.

One gets the impression that T Minus 5 has ambitions that go beyond singing doo-wop for the Aunt Lil and the corn-dog scarfing masses. However, if they are going to achieve something relevant to the broader music community, they are going to have to take more chances. A cover of American Woman introduces a growling bass and pounding percussion, all at the service of a solo that is utterly genteel, if not downright banal.

T Minus 5 possesses the talent and, I think, the desire to make a great album. Casual listeners should wait until it is ready to make it.