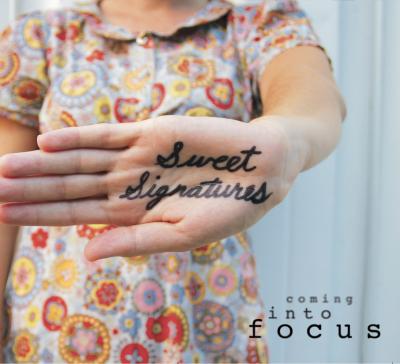 The Sweet Signatures are no longer singing in the pitch black darkness and letting their inner light shine. Or, at least, they are definitely Coming into Focus and heading in the right direction. Kudos goes to the ladies of Elon University's Sweet Signatures. Their latest album is a pleasure to listen to, with some sparkling gems that are sure to please for years to come.

This album nearly overcomes all of the flaws mentioned on their last album. The group is still blessed with strong soloists, a fully rendered wall-of-sound, spot on tuning and a definite crackle in their energy. I say "nearly" because the major flaw is still apparent: some weak and repetitive arrangements. But whereas the majority of tracks on the last album suffered this fate, truthfully, Don't Stop Believing and Take Me or Leave Me are the only major culprits this time. Plus, they've added a few arrangements penned by wunderkind Joseph Bates, upping the creativity of their repertoire.

Coming into Focus opens with just such a track. Magic Tree is possibly the best collegiate female song that I've heard this year. Everything about it zings. I may be late to the bandwagon, but I'm completely blown away by the inclusion of audible breathing as a rhythmic device. My land! Jamie O'Brien's solo is gutsy and sexy, bombastic and vulnerable in a single package. The seduction starts on the downbeat and doesn't ease up until the final orgasmic scream. The rhythm and groove provided by the background vocals makes you swivel and slink around like you're on the music video-making episode of "America's Next Top Model". The pulsations provided by percussionist Michele Hammerbacher drive the point home with her ease of play in the pocket.

As benefits a group hailing from a performing arts university, the soloists are uniformly excellent. Along with O'Brien, Lauren France and Sarah Arnn have pipes of gold. I was especially taken in by Arnn's turn on Kissing You; she was truly magical in evoking simple desperation and longing.

Not all is bliss with the singers, though. Maddie Phillips's voice was too light and underdeveloped to make Don't Stop Believing into the powerhouse pop ballad that it's supposed to be. And I'm going to go out on a limb and say that Phillips is probably a musical theater major (if not she should be!) because even though her pristine diction didn't fit for this song, she's got an effortless gift to make any voice teacher proud.

Conversely, strong voices do not make a great song. I'm one of the original Rentheads and a music theater lover — so I get especially giddy when songs are covered by a cappella groups. So I was looking forward to the Signatures's signature take on Take Me or Leave Me. What a valiant effort from the ladies. The performance came across almost like an American Idol screaming match. I can't totally fault Kate Austin and Kim Poe, because they were making up for a horrible arrangement, so a little extra histrionics from the soloists should be expected.

Songs with intriguing storylines get me every time. Wally and Breathe were the catch for me. I've heard dozens of recordings of the female group staple Breathe, but Jillian Ahrens' delivery was the first time I've listened to the song. So moving, so bitter, so beautiful. And Wally is sure to become an anniversary classic.

The future is clear for the Sweet Signatures — it's going to be a bright, bright sunshiny one!

Coming into Focus could be titled "Coming Into The Spotlight", because this album will almost certainly cement the Elon Sweet Signatures as one of the top collegiate women's groups in the country. High energy, quality arrangements and superb production combine to make the album worth a listen.

The main reason Focus stands out is the Signatures' fearless commitment to bringing attitude. Whether it's the ferocity of Call Me When You're Sober or the self-absorbed flippancy of Take Me or Leave Me, these women leave nothing on the table. The Sweet Signatures have many faces, and they choose diverse and interesting repertoire to show them all off. Say what you will about JT, but SexyBack ends the album as a well-placed cherry on top; I still can't tell if it's silly, serious, or both.

Of course, it doesn't hurt that some of the best in the business worked on arrangements and engineering, including probably the best use of an octavizer. Well-sung vocals are expertly mixed into a compelling final product.

Unfortunately, all the energy adds up to a bit too much. Solos often walk the line between energetic and out-of-control (and occasionally step over). Quieter pieces such as Harbor and Breathe lack the ebb and flow necessary to make them truly excellent (though the penultimate Never Alone nearly gets there). While overall Focus is a great album, it lacks some nuance.

Coming into Focus will undoubtedly create a buzz in the collegiate a cappella community. The Sweet Signatures have talent and drive, and this album proves it. If these women are just reaching focus now, I can't wait until the next snapshot.

The cover art for the Sweet Signatures' Coming into Focus is altogether troubling. It has the same generically hyper-feminine look of a package of tampons. I popped the CD in, anticipating an hour of trebly Avril LaVigne and Sarah McLachlan covers.

The first track, a relatively thumping rendition of Magic Tree, assuaged my worries. In fact, the ladies of Elon University had me going with the first couple of numbers, offering also a suitably edgy version of an obligatory Evanescence track. Strong arranging and a particularly strong solo (by Lauren France) on the latter set the right tone for a kickin' album.

Unfortunately, the album succumbs to the doldrums in its midsection. A cutesy, Paula Abdul-esque take on the schizophrenically spelled Don't Stop Believin' didn't add any credibility to the notion that a cappella bands ought to be in the business of covering Journey.

Part of the problem is that every song gets approximately the same treatment. Na-na syllables, an octavized bass line, spunky solos and no discernible dynamics. The latter characteristic sinks an otherwise strong rendition of Kissing You, which features a compelling lead by Sara Arnn. In general, the tracks serve as competent, but relatively benign, facsimiles of the originals.

Sorry, but I have to briefly revisit the cover art. Why is the girl's dress laying on the lawn on the back flap? That's awfully disconcerting. But I digress …

The album is never incompetent, though the inclusion of Take Me or Leave Me from RENT puzzles me somewhat. Why cover an unmemorable song from a decade-old musical? The album concludes with SexyBack, which I am not going to dignify with critique.

Coming into Focus features another strong solo by France on BarlowGirl's Never Alone, which is well executed all the way around, making me wish the album had stuck with the harder, edgier motif. These ladies can certainly sing, know their way around an arrangement, and have access to a good studio. So …

Why not break the mold a little more? This group could knock a Yeah Yeah Yeahs track out of the park, so why do we need to hear them perform the 114th all-female rendition of Breathe? If you have to do Journey, why not innovate and bring something new to the semi-ironic a cappella cover genre?

But I am asked to review what has been recorded, and what we have here is a group of very talented women singing nice songs that aren't as boring as I feared they would be. For that, they are to be commended. For the cover art, less so.