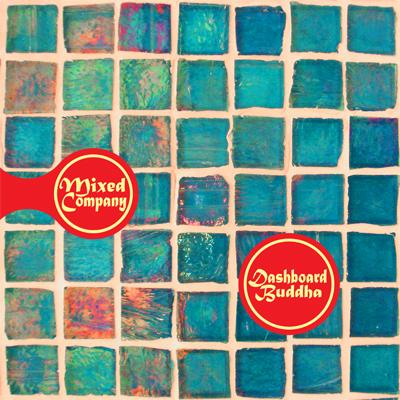 You know my love of Yale's Mixed Company if you've read my reviews, but let me tell you that it's being tempered and tested with their latest release Dashboard Buddha. Celebrating 25 years of existence, the recording tries to capture the history of the group but only succeeds in getting stuck in the past.

It's terrific that Hodja opens each recording for Mixed Company. That's a great way to maintain a lineage for the next 25 years. Unfortunately, this version doesn't come close to the great job they did on Two Steps — it doesn't even compare favorably to "Doing Justice". Allison Lieberman's soprano line is sufficient, and is indicative of the fact that the women outshine the guys as soloists. But the track comes to a complete stop when bass Dane Lund sings his section. While I'll always be in awe of resonating basses, Lund's phrasing and tonality brings to mind of someone attempting sprechgesang: tuneful, but devoid of musicality.

The next track shows glimpses of what the future holds for the group, and the disconnect with certain material that can occur within a single recording. The Trouble with Love Is is a strong track. Stephanie Chan is compelling and nuanced, bringing a Kelly Clarkson freshness and flair to the song. The fact that the song was released in this decade probably afforded a connection to the material that the group wasn't able to muster on Brandy, Summer Breeze, Just Once and Soulshine. Arrangements and some recording techniques are keeping the group from blossoming into the group that they seem to want to become. The natural balance between the parts is evident; they really know how to sing well as an ensemble and highlight parts that deserve emphasis. But the abundance of "doo-wah-dit"-type blocks is so reminiscent of the early '90s arranging styles that you forget it's a new millennium. And even though this recording's sound is richer and less "in the chapel style" of Two Steps, there are more avenues that should be explored to make this a real studio recording instead of a recording done in a studio. In my car, the soundscape is much better with fuller bass, thicker chords and just overall more power than on my computer or stereo (hence the higher production score). I'm all for old-school singing when the group can take the machinations available today and make the songs soar!

Yay for only having 14 tracks. That is all.

I'm lifting this directly from my last review: "Across the board the women are powerhouse vocalists. They carry some mediocre tracks to higher levels of success with an effortless command of talent and prowess. Unfortunately, the same can't be said for the gents. Often their voices sound pinched and thin. The guys in the group are young and it's reflected in their solos. The notable exception is former music director Aaron Lambert. His turn on "Where Did I Go Wrong?" was in short, remarkable." I left the last line in there because I still love Lambert's solo, but also to point out that there was no male exception on this recording. Matthew Busick's Good Old-Fashioned Lover Boy comes close, but more so for the kitsch factor than anything else.

And lest I sound harshly critical, I'm still mesmerized by So Simple. Thank you all for recording that one again.

Dashboard Buddha is more than a yearbook album — the ladies make sure of that — but it's definitely not for everyone.

As they turn 25, Mixed Company of Yale has turned out Dashboard Buddha, an album with a track list that has soul to spare. Including songs by Alicia Keys, Marvin Gaye, and Quincy Jones, Mixed Company dives right into the deep end of covering big, soulful voices. Unfortunately, they just don't have the solo talent to stay afloat in these waters.

Granted, there are a lot of things that are right with Dashboard Buddha, but its sound is easily overshadowed by a good handful of other top tier recordings. Alright, let's have the good news first. Mixed Company is a group that, according to its website, strives to "maintain the musicality and technical accuracy that have come to be characteristic of Mixed Company's concerts". I can hear said musicality and accuracy in the fact that the songs on this album have dynamics. Not the "fader up, fader down" engineered dynamics that have become increasingly the norm is contemporary a cappella, but honest to goodness "let's crescendo-diminuendo with a unified supported sound" dynamics. I have to be honest and say that I usually prefer the more processed dynamic sound, since most groups who attempt it naturally on record do so unsuccessfully, but Mixed Company gets good marks in my book for proving that there ain't nothing like the real thing.

To be fair, however, although I give them an "A" for dynamics, I have to slap them with a "B+" for tuning. I've heard worse, but in this day and age any kind of poor tuning that detracts from the sound is really inexcusable. This is a Bill Hare production, and I doubt it's a coincidence that the tracks that sound a bit more tweaked also have the best tuning and overall quality of sound. There really is a noticeable difference between the tracks with a more live aesthetic (Brandy (You're a Fine Girl)) and the tracks that sound more engineered (The Trouble with Love Is). I can only guess what went on behind the scenes, but I will say that, since the aforementioned musicality was consistent even on the more produced tracks, I'd prefer to hear even more of this refined sound next time around.

Okay, back to my gripe with this album: soloists. This is a track list full of difficult songs to sing, and Mixed Company's leads are sadly not up to the challenge. The women fare much better than the men. Quite a few of the ladies have solid, brassy, musical theater-style voices that work nicely, although at times a bit inappropriately for song style. The guys, however, need to step it up a bit as Brandy (You're a Fine Girl), Good Old-Fashioned Lover Boy, and Soulshine were all plagued by bland, poorly controlled male solos. In fact, enough riffs spiral out of control from both genders that I would highly suggest vocal control and solo phrasing as two things that Mixed Company should pay attention to on future albums.

I have to admit, even though I didn't walk away from it impressed, I was somewhat charmed by this album. I was happy to hear evidence of fun being had by the singers as well as good musical expression. I just can't recommend it to the general public. Mixed Company seems like a group with a good foundation and direction, and I hope to hear a more polished, professional sound from them in the future.

Mixed Company's signature song begs, "Hodja, please show me how to spin." Either the Turkish folk hero didn't return the Yale group's call, or the guy doesn't know a thing about a cappella. While Dashboard Buddha's earnestness might endear this veteran co-ed group to listeners, the album's strengths are marred by unforgivable tuning, poor blend, and a lazy block.

The dreadful Let's Hear It for the Boy is the best example of what goes awry on nearly every track. On the rare occasions when arrangements allow members of the block to depart from "doo"s and "dah"s by giving them words, phrasing and feeling goes out the window. The altos are the worst offenders, and their lazy pitch and nonexistent blend conjure an image of girls singing in front of mikes, heads tilted to one side, filing their nails distractedly. The soloist, like so many on the album, gives an enthusiastic performance but can't commit to her riffs. She's singing out of the comfortable part of her range and too often switches into an insecure head voice. And how did the group allow themselves to release a song with tuning so bad that more than once it results in unintentional dissonance?

Though tone is acceptable across the board, severe pitch issues plague the soloists. The men are barely worth mentioning. Among the women, Jessica Bian and Stephanie Chan manage to stand out, but both would have shone brighter with better choices for their ranges or a little studio polish. I'm unimpressed with Chan on The Trouble with Love Is until the bridge, when she suddenly shows control, strength, and phrasing. As soon as that magical, mysterious bridge is over, she's back in her head voice, struggling along. On I Wanna Dance with Somebody, it's a testament to Bian that despite significant pitch problems, she's light-years more convincing than most of the female soloists on the album. Her energy is so infectious and jubilant that it's able to distract from the block's dismal tuning. The album should have opened with her song. The only singer who offers a flawless performance is soprano Estelí Gomez, whose nuanced, heartbreaking interpretation of Sarah McLachlan's When She Loved Me is the album's strongest performance.

Strangely, Hodja was also the opening track on the group's last two albums, and three other songs from 2005's Two Steps were re-recorded with new soloists. Perhaps it's time for Mixed Company to move forward, not only by picking new songs, but also by embracing recording techniques that will encourage everyone to take responsibility for their tone and technical accuracy.

Finally, if including Hodja is a must next time around, the song should be placed towards the end of the album. There's something to be said for tradition, but if it stilts you this much, it might be time to start with something new.