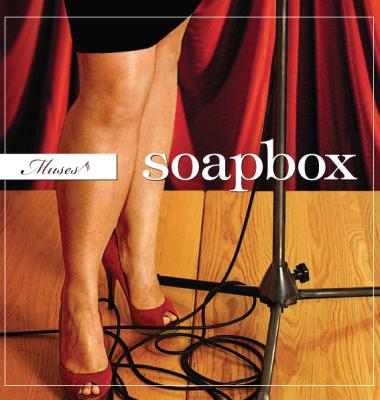 Some combination of more time, more takes or more money could have brought every track on Soapbox to a 4. That's the base level of their sound. It's only when some flaw, a warble, one unwanted oddity or another evokes a momentary wince or eye roll that the scores take a dive. Unfortunately, those distractions are not rare.

The first thing a casual listener would notice about the all-female MIT Muses is that they appear to have a guest robot bass joining them on every track of their latest release Soapbox. Almost all groups flavor their sound with a light dusting of bass enhancement, a bit of extra oomph to the low spectrum. This is nothing so subtle. Human? Keyboard? Hard to tell. Whatever it is, the result is sonically that of a mixed ensemble.

Cut and paste, electronically enhanced VP, and auto-tuned, effected back-ups do make this pop CD all the more poppy and listenable, but the artificiality does seem to offer a challenge: can you imbue these songs with enough humanity to pierce that big artificial wall of sound? To greater and lesser degrees, the Muses do step up to the challenge.

Some of the lead craftsmanship is the passionate artistry of the Muses; some is just hiding obvious mistakes through engineering. A number of distinctions between 3 and 4 (and between 2 and 3) were made on the basis of tone color, little pitch-correction artifacts or bad note choices. Average and good, on Soapbox are a hair's breath away.

A great deal of the Muses' sound is legitimately credited to their producer. The production literally sounds as if a giant "smile curve" were placed on a graphic EQ (lows and highs boosted while midrange reduced). The sibilant highs quickly erupt from pleasant glossy sheen to piercing aural attack (Fly, When It Comes, Somebody to Love, I Touch Myself). The bass is a dominant aspect of the sound on every track, which, as mentioned, is a bold placement for an entirely artificial creation. Sometimes the mixes could have benefited from a more prominent lead. But while that may be true in a perfect world, it's quite possible that flaws in delivery have been successfully masked by the very mix choices that frustrated this listener. Perhaps at least in some sections, the dilemma was simply handed over for the producer to deal with as part of the tracks. Only the Muses' producer knows for sure.

If Soapbox had been a live concert, it would have been a smashing success. The MIT Muses' energy and fullness would have thrilled listeners and washed away the tiny imperfections. It's only because the tools of the studio have brought a cappella recording standards so very high that Soapbox suffers from a more microscopic and technical critique.

With the recent introduction of pay-as-you-play options like iTunes, we music consumers must no longer feel guilty for buying entire albums to enjoy just one or two tracks. We enter any number of non-committal "relationships" and fill our libraries with favorite tracks instead of albums that can be listened to cover to cover. Soapbox, the latest release from MIT's all-female Muses, is an album for this age. Marred by inconsistency, but not without its (very) high points, it contains nuggets of a cappella gold and a whole lot of mediocrity, an album tailor-made for the e-racks of the acaTunes library where the listener can pick up Soapbox's two gems and forget the rest.

While I wouldn't shell out $10 or $15 for Soapbox, I'd gladly pay one dollar to be able to listen to Say You'll Be There whenever I wanted to. This is a cappella at its campiest: unadulterated, sugarcoated 90s girl-group pop covered to perfection. The background chatter in the introduction hints at the fun to come, and John Clark's arrangement and subtle layering of the vocals give the song great texture. The quartet of soloists gives a cute, well-executed turn on the solo, and the backing vocals exhibit the best pitch and blend on the album.

Don't Bother is the other highlight, thanks to Linda Ye's spot-on take on Shakira and fantastic arrangement, which beautifully contrasts blocky "ah"s and "ooh"s with driving groups of eighth notes. Coupled with John Clark's production, Ye's work on Don't Bother lends the track a disquieting yet intriguing quality.

Excepting those two songs and the album's design (the liner notes are some of the nicest I've seen), little else impresses on Soapbox. Least impressive are the Muses' soloists. They lack the vocal prowess to take on the demanding solos of Somebody to Love, Behind These Hazel Eyes, and even Take a Bow. For the most part, the soloists sound unsteady, almost immature; it's no wonder that the more convincing solos come on song originally performed by Hilary Duff, the Spice Girls, Harvey Danger, and the Divinyls (the hidden track, I Touch Myself).

The Muses are also plagued by a chronic lack of energy. Sluggishness dampers I'll Be and Somebody to Love, and intensity is missing on tracks like I'll Be and When It Comes, which require intensity to sustain the restrained vocals. It's a shame that the most consistently upbeat track, I Touch Myself, is a hidden track and comes at the end of a string of underwhelming performances.

Though Soapbox features some better than average arrangements, the execution isn't there to match. At times, even the production and mixing are uneven, as heavy alto parts clash with fragile and muted soprano lines. Inconsistency is the album's deficiency. At its best, Soapbox is fantastic, but merely average otherwise. Try and track down Say You'll Be There and Don't Bother, but pass on the album.

For an album entitled Soapbox, this latest offering from the MIT Muses doesn't have much of a viewpoint. However, although the Muses themselves may not be entirely inspiring, Soapbox certainly has a lot to teach us about the power of sound engineering.

From gorgeous packaging to powerful production by John Clark and Ed Boyer, the magic of Soapbox is almost purely superficial. Recorded a cappella may be becoming more of a magic show, but regardless, many of the Muses' flaws seep through the smoke and lights. I'd love to have been blissfully unaware of struggling solos or thin arrangements, but production can't mask it all. If anything, the polished, professional sound only seems to draw attention to the Muses' amateurish musical choices. Like oil and water, the girls and the engineered sound don't mix.

Soapbox's largest problem is the most heartbreaking, since it's the one that usually can't be helped. None of the solos on Soapbox is particularly difficult, but the girls still struggle. Most of the soloists put a healthy dose of emotion into their work, but their tone is often nasal, their breath control is weak, and their vibratos are wobbly or forced. These issues are most prevalent in Behind These Hazel Eyes and Take a Bow. Luckily, these are catchy songs that are saved by their musical strengths. The same can't be said for I'm in a Hurry (And Don't Know Why) or When It Comes, both of which feature slightly stronger solos but much less musical appeal. I'll Be is another frustrating track. When will co-ed and all-female groups learn that certain tenor solos should not be sung by women? If the song's emotional core is dependent on the tenor belting in his upper range, as in the case of I'll Be, an alto singing the song sleepily in the same key just won't have the right effect.

Thankfully, all is not lost. This is still a likable, listenable album, with fantastic energy. Don't Bother is an impressive track, with a solo by Linda Ye that creates a more heartfelt and empowered impression than Shakira's original. Say You'll Be There and Fly are fun choices, and again, the production is lovely overall. The Muses may not be breaking any ground, but the album has its bright spots.

On one hand, the group should be praised for putting out a pleasant final product, recognizing their limitations and improving their sound with outside help. On the other hand, these women are fully capable of putting themselves in a position where this help is less necessary. A more cohesive track list, innovative arrangements, and simpler solos in appropriate vocal ranges will help the Muses push forward.