Jerry Lawson & Talk of The Town 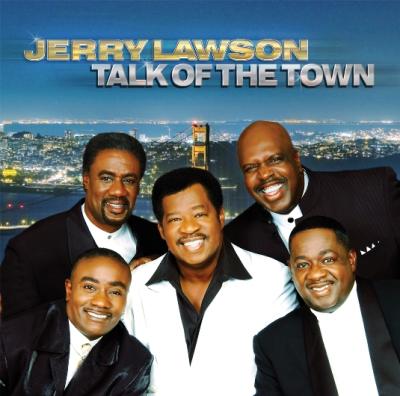 Jerry Lawson has a mighty fine voice, that's what it comes down to. That's why this is a special album, that's why Sean Altman and Deke Sharon and a couple of Schmaries and Talk of the Town, a whole other San Francisco a cappella band, jumped at the chance to make this record. To back it up further, it's also why the Persuasions had such a compelling sound, and why vocal music would be so much poorer without Lawson's lifelong dedication.

This record in a vacuum? It might leave you nonplussed. It's got some catchy songs, a nice old-school vibe and lousy tuning. But there's that guy in the middle of most of the songs, that voice that catches and preaches and soothes and stirs. It's worth picking out. Once you focus on that voice, the songs pick themselves up and settle back down around it. The music makes more sense, the other voices line up more surely, and suddenly we listeners are inside the wire. It's real music, music for musicians, the sort of thing that happens in bars and living rooms late at night when the rest of the world has sloped off. Through this recording, a few more of us can get a piece of the action.

If you just want a taste of this sound, there are a few songs that sound better than the rest. Slow Hand and Honey I'm Home sound really good, for any group, with a great groove and an infectious sound. (Hard to believe in the case of Honey I'm Home, which began life as a Shania Twain song, but trust me it totally works.) Most of other songs are more of a "for collectors only" archive, to use Don Gooding's marvelous turn of phrase from the early days of a-cappella.com. I enjoyed Jerry's take on Frankie & Johnny, and What A Wonderful World. River of Dreams is pretty groovy too — it's been reimagined as a baritone number, which improves the timbre tremendously, and Altman's overlay is pretty entertaining.

This album is an intimate recording for insiders. As soon as you listen, you'll be one too.

Jerry Lawson & Talk of The Town sounds like a rough mix of a rehearsal tape. The album had me sucking air through my teeth and rubbing my temple. Surely Jerry Lawson is better than this.

By today's standards, Talk of the Town's blend is inexcusable. Singers rub pitches. Bright vowels clash badly. The group rarely sings a straight note, applying a fragile, Aaron Neville-like vibrato to sustained chords at the ends of phrases. Individual singers aren't just easy to pick out, they stick out. The baritone in particular is consistently panned hard left, sounding inches from your ear, and his vibrato is always the hardest in the group.

I can't understand the album's mixing. There is no reverb; it's mixed dead cold and dry as a bone. Even doo-wop's native streetcorner setting would provide some reflections from buildings. I can't remember the last time I heard an a cappella song mixed with absolutely zero reverb. The effect was almost disconcerting. Most songs are arranged in doo-wop blocks, but with no reverb and few moving lines to connect the blocks, many songs are left with gaping sonic holes. Fortunately, the general eq of the voices is smooth and warm and the group's cutoffs are usually clean.

The balance and panning are also confusing. Most songs push the background voices to the foreground, leaning Jerry against the back wall of the recording studio. Some songs pan individual voices hard left and right, e.g., baritenor is 80% left and high tenor is 80% right. Jerry, the bass, and any instrumental or scat line are always mixed center, but Jerry's dark and throaty voice always seems to get buried, muffled behind the brighter "background" singers. Some songs, it sounds as if Jerry is bopping about the recording studio, moving in and out of the mic's sweet spot.

I've always associated doo-wop with the fervor of streetcorner live performance, but too much of this album is lifeless. The bass lines are repeated, rote loops of standard doo-wop patterns. The group has one volume: mezzo-forte. With few exceptions, Jerry sings at a medium volume, raising his voice and intensity only near the end of the album. The gospel songs are, of course, repetitive, but too many songs suffer from too little variation, intensity, and build. I perked up a bit at Honey I'm Home and Thank God For You because of their folksy and entertaining lyrics, but even these two songs, which surely please a live audience, were undersold.

To a cappella's longtime devotees, or to those with an older set of ears, this review of Jerry Lawson & Talk of The Town may seem apostate. Call me a heretic, ignorant, arrogant, or disrespectful, but the album's sound is outdated by more years than I am old. Updated arrangements of the same songs with the same singers in a modern studio could make this album vibrant and germane. Instead, this album sounds irrelevant, a footnote to an an era long gone.

Top notch singers, especially the leads and bass, make the album listenable. The bass is thick, low, and resonant. The leads are soulful, warm, and rich.

The production is terrible. Most of the album sounds single tracked, with the parts panned out separately. No effects and basically no reverb or delay. As a result, the tuning suffers throughout, severely at times (At This Moment, For The Love Of You, He Gives Us All His Love).

Repetitive, undemanding, and similar-sounding arrangements suck much of the potential out of the album. With very few exceptions, all the arrangements stay in the "doo", "bop", "ah", and echoed lyrics style. Many of the tracks end with a vamp, fading out.

The themes are 100% light-hearted, and I would have loved to hear some darker, more contemplative or introspective material. I did get a kick of out the line "I thank Mama for the cookin', Daddy for the whoopin'".

Talk of the Town has a great deal of studio potential, given its high level of vocal talent and style. Unfortunately, the lack of ambition in the arrangements, the lack of diversity of subject matter, and the length of the album resulted in a tedious listen.