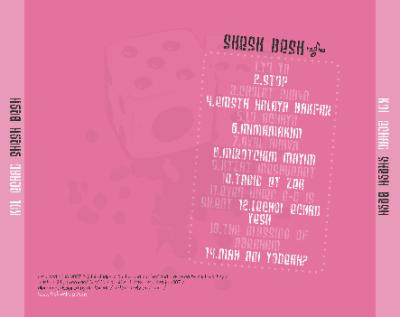 Kol Echad enters year 13 at Boston University on a sour note. Shesh Besh is an amateurish collection of 14 Jewish songs that are unlikely to appeal to any but those who already count themselves die-hard fans of the group.

The group aims for a contemporary Jewish feel, with modern beats and a bit of a world music quality to the vocals. Having a clear goal as to the sound they're aiming for is perhaps Kol Echad's greatest strength. They are blessed with soloists who are about on par with, if not occasionally a little better, than typical collegiate soloists. Unfortunately, the final product is sunk by painfully weak intonation and blend, lackluster arrangements and production that does little to help the situation.

It's admirable that the group attempted to record without computer-assisted pitch-correction, but it's the rarest, most well-rehearsed of groups that can record au naturel without the product suffering. Kol Echad isn't the exception.

Number one rule of a cappella: tune it. It's nearly impossible to enjoy a soloist backed up by out-of-tune chords. It's even harder to enjoy when the soloist is out of tune. While sounding natural on Shesh Besh was a laudable goal, a Machiavellian-Malcolm X-ian approach would have been a better option: the ends do justify the means, so get in tune by any means necessary!

Arranging and production can often go hand in hand in contemporary a cappella recording. A simple "ooh" over some vocal percussion can sound anywhere from inspirational to pathetic. On Shesh Besh there are some tired syllables, uncomfortable descants and awkward vocal percussion. But all that could have been "fixed in the mix". It's not worse than the raw material that goes into most collegiate recordings. But where almost all collegiate groups have those raw tracks face-lifted, tummy-tucked, botoxed and bleached, KE gets a dusting of stage make-up. It's not enough. Sometimes that's a matter of botched producing, sometimes it's just a matter of a group having too low a budget. Whatever the matter is, the magical elixir for most groups isn't here.

Kol Echad is a group that could have turned heads with unusual material and compelling leads. When they nail down all their basics, they surely will. But Shesh Besh isn't the recording to do it.

There's not much to say about Shesh Besh, so I'll get right to the point: This album is not worth the jewel box it came in, unless you like parallel fifths and guitar riffs that sound like screeching cats. Though I probably had too high expectations for my first Jewish/Hebrew album in five years of reviewing, I didn't know the genre could still be this bad.

Back in my day, Jewish-themed groups got a rep for being cutesy and gimmicky. When Shir Appeal broke out of the pigeonhole by appearing on BOCA, the bar was raised to set a standard that Jewish a cappella doesn't have to be just transcribed prayers and songs from our Hebrew school days. Six13 recently pushed the limit even further with three "5" overall scores here on RARB. So while I applaud Kol Echad (Hebrew for "one voice") for covering contemporary and up-and-coming Jewish fare like the Moshav Band and the Idan Raichel Project (ask your local Hillel), the outdated production values, arrangements, and execution simply do not meet the modern music.

So it comes as quite a shock when one pops in Shesh Besh and out from the speaker comes an homage to the syllable "jen" in no fewer than fourteen parts, with a whole lot of meowing and "dow now"s making their presence quite known. Kol Echad doesn't take a lot of creative license in making these originals their own; the arrangements are essentially transcriptions, vocalized into sung syllables. From the unnecessary instrumental in the opening Yoya through the utterly repetitive Mah Ani Yodeah?, Kol Echad comes across as unsophisticated and oversimplified. There are few songs in which the lyrics alone can carry the interest of the listener, and none is heard on this album.

Shesh Besh lacks a lot of the musical features considered rather essential to an a cappella album these days. Blend is poor, and often times the voice parts stick out between one another. Breath sounds are audible and cut measures short; they are noticeable in many of the 4/4 songs. There's nothing innovative or spectacular, soloists are ordinary, and it's absolutely unmoving. It's the sonic equivalent of the Yule Log on television (sorry to use a mismatched metaphor): it's supposed to evoke the spirit and soul of the Jewish people, the feeling of tradition, community, and humanity, but instead I'm getting a copy utterly devoid of personality and imagination. Most of the original music is moving, tender, or lively; in a cappella form these songs seem lifeless and dull.

Hopefully Shesh Besh will not turn non-Hebrew speakers/aficionados away from the genre of Jewish music. Little, if anything, heard here rises above mediocre, which does a great disservice to the emerging Israeli and American artists whose songs are heard here. No matter what you're singing, at this point in the development of recording technology there's no excuse for the cat-screeching. With the fluffy production and boring arrangements, Shesh Besh could have been made on cassette in the early '90s and sound identical to what's on the compact disc. With no lack of decent material to cover, this album disappoints in all respects.

With "wen na neh na" guitar solos ablazin', Kol Echad has released Shesh Besh, a recording that would not have sounded out of place had it been released ten or fifteen years ago. From the poorly edited and tuned live-in-studio performance to the choppy "jen doo bah" arranging, everything on this album sounds as though it were pulled from the playbook of early '90s a cappella. This is not to say that Shesh Besh doesn't show some promise, but Kol Echad has a long way to go before I'd recommend them to anyone.

From the first notes, it's clear that there are basic things on this album that could have benefited from more attention. First of all, Kol Echad needs to work a lot on matching vowels to improve blend. Many backgrounds sound very flat, due mostly to the fact that each person in the group sounds like they have a very different interpretation of each vowel sound. Their groove also needs improvement, as several songs suffer from awkward phrasing and out of time percussion (Stop was a prime offender).

Interestingly, even though Kol Echad has a lot of issues to fix as an ensemble before they will have a cohesive sound, there are several individual elements of this recording that exhibit strength. For example, even though the percussion didn't groove well with the rest of the group, the isolated sounds were actually pretty good. The same goes for the individual voices in the group. They don't blend as well as they could, but as soloists they're actually not bad at all.

A couple suggestions for Kol Echad next time: first, work on your sound as an ensemble and make sure that your vowels are matched. Second, I highly suggest working in some fashion with an engineer who has more a cappella experience. There are a lot of outdated sounds on this album that an experienced producer could have at least helped to modernize a little bit. With those things in mind, best of luck next time.