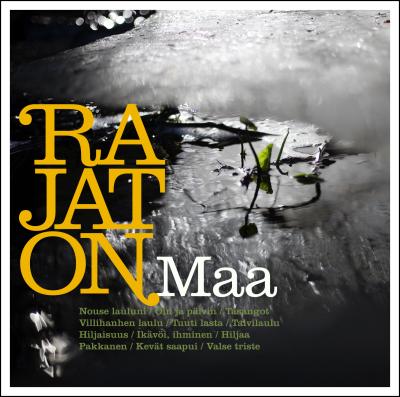 In celebration of its 10th anniversary, the brilliantly-gifted sextet Rajaton gives us Maa, revisiting the evocative Finnish poetry that provided the lyrical source material for their debut CD, "Nova", in 2000, and coupling their native tongue with new melodies composed primarily by members of the group.

Returning to one's roots is certainly a worthwhile undertaking. Noteworthy. Nostalgic to be sure. Perhaps even praiseworthy. But a compelling a cappella album it doth not necessarily make.

Just to clarify: if you've read my reviews of Rajaton's past CDs, you'll know I'm pretty much out of compliments to give them. They're awesome, I'm an unapologetic fan, and as far as I'm concerned, they've never taken a "wrong" musical step. However, they do have varying degrees of getting it "right" and Maa — which can be translated as earth, land, country, ground or soil, depending on the context — is at once a plaintive, beautiful, unadorned effort that moved me several times with its musical and lyrical poetry while at the same time being a far-too-homogenous CD that left me a bit underwhelmed and, truth be told, a tad sleepy.

To be fair, there can be little question that this is magnificent a cappella musicmaking. The soaring yet delicate sopranos, the rumbling yet tasteful bass and the seamless blend of everything in between ensure that the quality of the aural experience is nothing short of superb. But engaging, entertaining and exciting listening this is not, and the fault seems to lie in the mind-numbing similarity of nearly all the material. Sure there are flashes of toe-tapping energy (the Ladysmith Black Mambazo/Zap Mama-esque Pakkanen infused with its Bobby McFerrin-inspired bass line) and stunningly simple beauty (the haunting Öin ja päivin and the utterly gorgeous Tuuti lasta). But even with English translations provided for each song — finally! — the tracks on Maa very quickly start to blend indistinguishably one into another. Indeed, many tracks might better be described as "tone poems" rather than songs, as meandering melody lines abound and there is rarely, if ever, a true "hook" to be found. Also noticeable by its absence is the lush, rich sound of Out of Bounds, with its tasteful and creative use of processing and effects. This is unvarnished, unadorned Rajaton, almost completely sans VP, and recorded for the first time by their concert sound engineer who favors a clean, crisp, seemingly live mix that stands in stark contrast to the studio magic these folks have been unafraid to use in the past.

Then again, on some level, Rajaton may just be a victim of its own seemingly limitless talents. They decided to get artsy with this CD and maybe I should just give them some space. But as much as I applaud the nobility of their efforts, an entire CD of contemplative slow- to mid-range mood songs, especially from a group that can do so many different things so well, is bound to be a qualified disappointment for me.

Rajaton, one of the world's premiere a cappella groups, remains at the top of their game with Maa. Over five years and five albums, Rajaton has floored RARB reviewers with their musicality, and they show only signs of improvement.

Maa is an album of many moods, and each song sets the mood perfectly. The opener Nouse lauluni, which seems to have a folk-song lilt to it, confronts the listener with bombastic harmonic and lyrical energy. Talvilaulu, translated as "Winter Song", feels like a stroll through snowy meadow. Hiljaa is incredibly well-focused yet emotionally subdued. My favorite track is Tasangot, which uses extensive humming and harmonic tension to weave an exciting texture. The album closes with a waltz that somehow mages to be both ethereal and hip at the same time. (How many times have you been able to describe a waltz as hip?) I prefer to hear Rajaton in their native Finnish, and thankfully Maa presents no English offerings. Especially amazing is Rajaton's ability to convey the songs' emotions despite language barriers.

Also impressive is how effortless and unaffected Rajaton sounds. The near-perfect tuning, blend, energy and emotion of Maa must require Herculean effort, yet all the singers always sound calm and composed. The album features several different soloists, and all are consistently excellent. This is truly a top-notch sextet.

Maa is a typical Rajaton release: excellent in almost every way. The more I review Rajaton, the more I appreciate them. If you're already a fan, you won't be disappointed. If you haven't checked them out yet, what are you waiting for?

Rajaton's Maa doesn't contain the most accessible a cappella in the world, but it is some of the most rewarding. Rooted in traditional Finnish poetry, expertly composed and arranged by the group's members, the album represents what Rajaton calls a return to its Finnish roots. The album is technically proficient, yes, but on Maa, the group seems to have found something eminently pleasing within itself. The result is a masterpiece that, cultural barriers or not, is their most substantial work to date.

From the outset, Rajaton gives us songs that possess character and beauty. Nouse lauluni is a raucous, unpretentious call to join Rajaton in celebrating a country that we Americans contemplate ironically, if at all. Its energetic congeniality offsets a starkly patriotic oeuvre (the opening line translates to "I will sing the songs I know of"). This is not an American a cappella album, nor is it an attempt to cater to American audiences. You are for Finland, or you are against it.

If Maa is any indication, it's best to be for it. This is not a cappella as facsimile or post-modern commentary on popular music trends. The esoteric chants of Talvilaulu are as sincere and haunting as Sufjan Stevens' geographically-themed works. The album is not an attempt to uplift or entertain, but to contemplate and even provoke.

Something of a pop sensation in their homeland (where their last album went double platinum), Rajaton is not beyond incorporating a variety of international influences into their nuanced soundscapes. Villihanhen combines the exotic mystique of a Japanese teahouse with the rhythmic pop of decades-old mall music. The result could be the most thematically complicated theme to a video game you have ever heard. Tasangot finds resonance in the chordal progressions of early 90s American alt rock.

Above all, Rajaton is comprised of brilliant musicians. Tuuti lasta, based of a Finnish lullaby, lays a supremely delicate solo on top of a luscious background that hushes back and forth like a mother cradling a child. Strong production and outstanding bass-work elevate Pakkanen (literally "frost"), an apt meditation on life in seemingly-perpetual winter.

The album concludes with Rajaton's interpretation of Finnish composer's Henryk Sibelius' Valse triste. In the hands of other groups, this might have devolved into gimmickry. Here, the track perfectly observes the detached quiet of the orchestral arrangement. The sole "cover" on the album, the Valse triste fittingly concludes Maa's journey.

If Rajaton has suffered from an identity crisis in the past, Maa represents the singers at their most essential. A first-class work of a cappella in its own right, Maa is an album that transcends the genre. It is to be owned, shared, and celebrated as the very best vocal music has to offer.

To order this album, visit A-cappella.com, Primarily A Cappella, Plastinka, or, for autographed editions, the group's website.