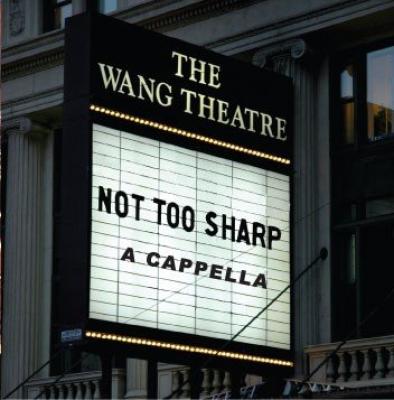 All male, slightly goofy and possessed of an infectious energy, University of New Hampshire's Not Too Sharp is just about the coolest Glee Club I've heard in ages. Yes, some of the tracks could be confused with those of a typical collegiate group (Sugar, We're Going Down, Soul Man, World I Know, Hotel California); they have vocal percussion and active harmony parts supporting pop and rock leads. But they also kick it old school. As in 100 year old school. They dabble in barbershop (Chordbusters March), humor (Weird Al's Ebay), Glee Club (That's What Friends Are For — not the '80s pop hit) and inspirational music (Brightly Beams Our Father's Mercy). And while Not Too Sharp doesn't exactly break new ground, they usually play to their strengths and manage to infuse their eponymous release with enough energy and charisma to win new fans.

By far the best track on the album is the closer, Hotel California. Although not my favorite arrangement (the clumsy syllable choices and plodding over-enunciation actually brought the track's score from "5" to "4"), the soaring and graceful tenor lead is exceptional, breathing new life into a track that could easily have been "phoned in" aca-karaoke style.

The first track, Sugar, We're Going Down is a close second with a bold, in-your-face energy that's appropriately on the verge of a shout. The arrangement is less distracting here though it's hard to miss the robotic nature of the basses or the "tah dah we're done now" ending that might work better live, but pulls the at-home listener out of the rock world and into the seventh grade school play world.

The production does a remarkable job making the wide variety of tracks seem as if they belong on the same CD. This is quite a feat considering the breadth of material. The clean approach serves the group well. The production regularly enhances the sound but still manages to stay out of the way. There are a few awkward deliveries (mostly of back-up parts) that I wish had been made a bit cooler "in the mix", but that's really wishing for different raw material. This production definitely respects the source material and it's hard to ask for much more than that, especially at the collegiate level.

Not Too Sharp should put their focus towards more musical arrangements — particularly syllables (and their delivery) and song endings. Not every syllable needs the kind of diction demanded of a lead. This approach clearly helps the group in rhythmic tightness and overall blend, but it fights the feel of the songs. It's just hard to rock over a bunch of dudes yelling "BAH DAH BAH DUM DUM!".

Every album leaves an impression that's subtly different than the mere sum of the parts. Not Too Sharp may have areas to work on, but it's just impossible not to like these guys. Charisma just drips out of the speakers. So if they polish the edges and hold on to that kind of elusive magic, Not Too Sharp will undoubtedly be a group to be reckoned with.

The newest recording by Not Too Sharp is a self-titled mix of mess and merriment. Not Too Sharp could have been reduced to an excellent EP of five tracks, removing the other five that are just a notch above filler. When the group clicks, the recording is very impressive. But the artistic integrity of the album varies so wildly that it's hard to believe the same group recorded all of the songs.

As mentioned, the pop songs are treated lovingly on this album. From the first note of Sugar, We're Going Down, I was convinced that my infatuation with the group from CARA-judging their last album wasn't a fluke. It's a meaty arrangement without being overly processed, and the soloist had a lot of energy. And then I discovered something just a little off. The "We're going down, down" timing of the chorus was off. The second "down" fell too squarely on the beat and it completely disrupted the rhythm of the song. Each of the other songs in the genre come with strong arrangements, fairly capable soloists, and rich production.

Unfortunately, the same cannot be said for those songs that are more traditional, glee or barbershop-inspired. Luckily enough, Chordbusters March is sung with gusto and good tuning so that it still sounds good. Interestingly enough, the good recording of this song makes That's What Friends Are For sound even worse. Likewise, tempo and attention to attacks hamper That's What Friends Are For and Brightly Beams Our Father's Mercy beyond repair. Maybe in 15 years even Ebay will be funny again, sound in tune and have soloists who sing slightly sharper than the ones here do (but not, too, ya know).

I know the guys have it in them to make a really great album. This one just wasn't it. Not Too Sharp isn't necessarily a yearbook album, but it's not going to bring the group any new fans.

Not Too Sharp is the a cappella album equivalent of an unattractive blind date that manages to surprise you with a sparkling personality. That's if you've got the patience to sit and get acquainted. These aren't best arrangements, or song choices, or mixes, but there's an earnestness to Not Too Sharp that's appealing. These men have pipes, but beyond that, they sing with honesty and conviction. That kind of commitment is worth its weight in production effects and multilayered arranging.

Take Soul Man, for instance; the "bah" and "dum" syllables aren't particularly inventive and the arrangement is pretty thin, but the soloist's energy is infectious. On Sugar, We're Going Down, the "chevy-evy-evy" syllables that kick off the disc are off-putting, but the production quality and soloist are pleasantly surprising.

The biggest problem with Not Too Sharp is that it's often tuned to within an inch of its life, and offers few additional effects to soften the unnatural, metallic quality that results from that tuning. This issue is most prevalent on the some of the backs of World I Know and parts of Soul Man. In general, the basses are mixed too loudly. They don't sound terrible, but they've got the ugliest and most distracting syllables by far.

Some choices are successful, such as the beautiful Demons, which never gets old. Most choices are just strange. Why the choice of Ebay, one of Weird Al's less successful parodies? This weak toss-up of a song that's ever-rapidly losing even its camp appeal (The Backstreet Boys's I Want It That Way) is perhaps the most random choice I've ever heard on an a cappella album. Chordbusters March, Brightly Beams Our Father's Mercy, and That's What Friends Are For are typical high school glee club choices, and that seems to be the reason why they're afforded fewer production tricks. However, the tuning is very weak, the pacing is poor, and the gloominess of the sound quality make them all seem twice as long as they truly are.

Still, Not Too Sharp is a pleasant, if simple album, one you'll want to keep around the next time you're in the mood for both Fall Out Boy and some hymns. With some planning and purpose, these fantastic singers could potentially create a cohesive and entirely enjoyable album the next time around. I'll certainly be waiting.