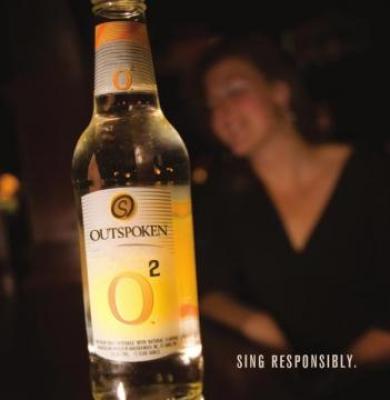 Outspoken's 02: Sing Responsibly takes me back to the late 1990s, and not just with songs like What a Good Boy, Roll to Me and Falls Apart. The production and arranging also smack of the '90s, and really, that is not a bad thing at all. Instead of tracks tweaked by technology and arrangements that are little more than a bass line and percussion, Outspoken puts forth an album where any of the tracks could be performed live and still remain recognizable to the audience.

Travis Cox contributes the majority of the arrangements and is the album's shining star (and a recently graduated one from the looks of Outspoken's website). His full, textured interpretations are beautifully rendered by the group, and Pete Hollens's light hand on the production allows them to be heard to full effect. (One peeve: Where is the melody line on the famous riff of Tears of a Clown? There is a harmony line a third above the melody, but not melody itself. It weirded me out.)

While the backgrounds of all the tracks are incredibly well done, the soloists are not always up to par. This is surprising, as a group that puts so much effort into its crisply performed arrangements should put the same amount of focus on their soloists. My favorite track on the album was Macho Man. The arrangement was creative and a lot of fun, the guys were clearly having a great time singing it, and the soloists really nailed it. The two tracks without soloists were also quite good, though Don't Whiz on the Electric Fence seemed out of place with the song choices.

But the rest of the soloists fell short in one way or another. The soloists on Tears of a Clown (overly nasal), Float On (trying and failing in sounding like the original) and Falls Apart (sung in the style of loud, drunk frat boy) just didn't do it for me.

At times, one wonders if the guys were given enough takes to get the solo right. The soloists on Brighter than Sunshine, What a Good Boy, 100 Years, and Roll to Me all have warm tones and great sounding voices, but some small mistakes and bobbles take away from the end result. Couldn't those lines have been punched in?

At other times, the guy just can't handle the solo. The rap on Jesus Walks sounds forced and a bit fake, and the falsetto on I Believe in a Thing called Love (props for trying) is strained.

The group is still young in the recording arena (this is its second album), but I am already a fan of the Outspoken approach to production and to arranging. If the group maintains that and lavishes a bit more time and attention on the soloists, Outspoken's third album could be truly great.

Outspoken's Sing Responsibly is a case study in the transformative power of good decision making. The Oregon State men's group puts its best foot forward by getting all the little things right, elevating what might have been pedestrian a cappella outing. If there is a blueprint for a well-crafted men's album, these guys found it. The finished product is downright, well, responsible.

What are the little things? Track selection for starters. Outspoken wisely exercises restraint with respect to the jokes about bodily excretion and underage sex that saturate too many all-male collegiate albums. When they do indulge (Don't Whiz on the Electric Fence), the result is almost tasteful. For the most part, the group executes a mix of contemporary and classic covers without relying on a cappella standards.

The album begins and ends on energetic high notes, and leverages remarkable diversity in between to maintain listener interest. While the Kanye West cover could easily have descended into schmaltz, the group takes the effort seriously enough to make it work without irony. And I am a firm proponent of putting the disco track at the end of an album.

The soloists on the album seldom overreach (with one glaring exception; see below), aiming to evoke rather than imitate the original artist. More importantly, all of the soloists can actually sing, which is refreshing. Most Five for Fighting covers make me want to fork out the soloist's larynx with an ice pick (and I don't even own an ice pick). Brice Cloyd's standout performance here on 100 Years rates as a staggering achievement.

Lest I be accused of damning with faint praise, I should note that this is a well-sung album. The simple arrangement structures allow the group to showcase their strong blend on ballads like Brighter than Sunshine. Peter Hollens adds polish to Outspoken's vibrant sound without over-processing it.

To my delight, there are no hidden tracks or drunken performances of the school song. There is, however, a rendition of I Believe in a Thing Called Love. I'm sure this was a hit with live audiences, but a song like this is a real high-wire act. Poor Josh Seitz seems to have fallen off the apparatus entirely, landing in a pen filled with hungry polar bears. Like poor little Cindy in the first row, I'm left to wonder, "Why, Mommy? Why?".

This is unfortunate, because I would encourage Outspoken to take these kinds of risks in future endeavors. Indeed, on an album rife with competence, there is nothing earth-shattering. Overall, however, Outspoken has demonstrated the right instincts to put together the right kind of album. On that basis, Sing Responsibly earns my recommendation.

Short review: This is an amazing album. You should buy it immediately.

Medium-length review: No, really, I mean it. Why are you still reading this review? This is the type of album that, when you finish, makes you want to start over immediately again from the beginning. In fact, I myself did just that: I listened to the album about four times in the first twelve hours after initially popping it into my CD player.

The arrangements are interesting: baritone Travis Cox is a seriously talented (and prolific) arranger (8 of the 12 tracks). About the only track I disliked was Jesus Walks, a rap song. That was probably because I just really can't stand rap. But at least this was well done rap. I thought the best arrangements on the album were 100 Years and Macho Man. They were both done by Cox.

The soloists were all top-notch: terrific singers, but they didn't overpower the rest of the group as sometimes happens. In fact, the balance between soloists and backups was terrific in every single song. Bryan Alexanderson was a bit over-the-top as the soloist on Float On and Falls Apart, but even though he hammed it up quite a bit I was made to smile instead of grimace, and those were two of my favorite tracks.

Five of the songs on the album are ones I've heard on the radio. I liked all five on this album at least as much if not more than the original radio versions. This even includes 100 Years, which I liked so much I bought Five For Fighting's album. Brice Cloyd did an amazing job here — he sounds better than John Ondrasik does on the original, and in my opinion should be considered for a "Best Male Collegiate Solo" award. And this Macho Man is a rockin' version that is so much better than the original it's not even funny.

Basically, any one of these tracks could make it onto a BOCA album and I would not be surprised one bit.

Lastly, additional kudos go to whoever chose which songs to include on the album and the order in which they were placed. There's a sort of flow to the music from track to track all through the album that is hard to put my finger on but which goes well beyond a series of disjointed efforts that sometimes comprise albums these days.

Summary: Go buy the album already. Then you can thank me.

To order this album, visit the group's website or acaTunes.com.