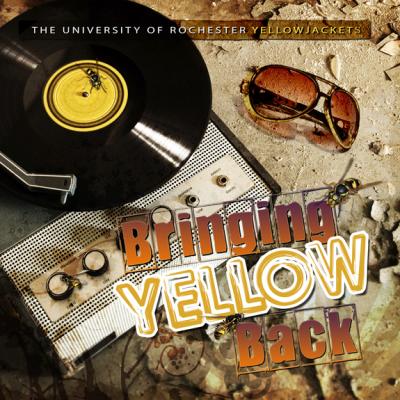 Too many syllables and bad tuning mark this latest album from the Yellowjackets. They aren't so much Bringing Yellow Back as sending it back, perhaps to the mid-1980s or some other time when bouncy energy was a full-fledged substitute for technical polish.

Let's start with the syllables. All Messed Up is the most memorable cut on the album with its jarring "ju-ju-juco" and "ju-j-ju-ju-day" backing refrain. One can only hope they're talking about two-year colleges and not synagogues, if indeed they thought at all about how their nifty innovative syllables might sound to the outside world. Likewise, the otherwise well-performed Don't Stop Believing is sprinkled throughout with "water-water-water-water", which sogs down the peppy solo and surprisingly good vocal guitar solo.

Elsewhere on the disc, tuning is the biggest culprit. The uptempo tunes have a few more defenses, for example All For You, which is fun enough to overcome its pitch problems. Hey Girl isn't so lucky, but it is at least fun. In contrast, Wordplay and Tonight I Wanna Cry just sink.

At least the album starts off right. Save a Horse Ride a Cowboy is its usual nice loud self, aided by what sounds like better and more intense production than the rest of the disc. And Hip To Be Square is downright fun. I loved the solo, and the rest of the group keeps the mood going.

If you have the option, download Hip To Be Square and skip the rest of this album. It's a nice enough yearbook, but not good enough for the rest of the a cappella world.

Bringing Yellow Back is a confusing release by the University of Rochester Yellowjackets. While the Yellowjackets deliver many enjoyable elements, in the end, most of the songs fail to hold together artistically and the album as a whole is frustratingly far from cohesive. With the right song choices and production, this could have been an excellent album. But the mismatched choices ensure that the existing product is unlikely to win new fans of these upstate New York collegiate stalwarts.

Leads are a big problem on Yellow. The karaoke vibe dominates, as singer after singer takes on the wrong song. The talent is there, but whether by inches or miles, the aim is off.

As one example, the group has a Dennis DeYoung type tenor. He's a little rock and maybe a little easy listening. On Styx or Air Supply tunes, he could've wowed people. On completely original material he could have done his own thing, but on Journey he sounds uncomfortable. He's got the range, but the expression is a forced fit.

Similarly, the Yellowjackets's lead on Wordplay has the range and rhythm down, but the style and articulation demands of the song elude him. It's uncomfortable. And to top it off, the arrangement just drops the song off a cliff at the end.

Production is all over the map, from a satisfyingly average degree of studio slickness to amateur but relatively clean. If any one of the production choices had stuck, the CD would have been more listenable. But the production variance is a significant distraction, making it appear more like a compilation than a cohesive album.

Stylistically, the University of Rochester Yellowjackets are identifiably pop-rock and soft rock. The hardest edge they bring is in their occasional but prominent use of distorted electric guitar effects. While the choice is a bit edgy, the other elements of the songs's arrangements rarely match that edge. If anything, the Yellowjackets generally prefer a slightly more natural, less wall-of-sound style than many collegiate groups, making the effected parts seem more jarring than they might otherwise.

I'm harping on the flaws, but in fact, most tracks manage to stay in the average range because there is enough good in each to justify those scores. Most enjoyably, the Yellowjackets never fail to bring an upbeat energy to their tracks, and for fans, that may be all they need.

I have never looked good in yellow. Fortunately for me, given the level of artistry on Bringing Yellow Back, I don't think I have anything to worry about. Yellow certainly won't be making a comeback based on this album.

Much of modern collegiate a cappella is artistically bland but technically proficient. The members of University of Rochester Yellowjackets don't even manage technical proficiency. From the opening block of Save a Horse Ride a Cowboy through the final cadence of So Long, So Long, pitch and blend issues abound. Transitions within songs prove especially difficult to listen to, including the bridges on All Messed Up, All For You, and especially Wordplay. Slower numbers suffer from poor tuning throughout, especially Tonight I Wanna Cry.

Even beyond these basic issues, the 'jackets offer few compelling reasons to listen. The album is short (roughly a half hour), and features a vapid and overdone playlist. Arrangements are overly busy and distracting. Production is weak, with the block sounding distant and compressed (though there are a few nice effects sprinkled throughout that give the album some character). Soloists are a mixed bag. While many sound out of range or vocally uncomfortable, they at least exude tons of energy. One standout is John Greenhalgh's heartfelt and nuanced performance on Tonight I Wanna Cry, especially impressive when one considers the hideously tuned block he must sing over. Throughout Bringing Yellow Back, the most redeeming quality is the decent sense of energy that filters through the less-than-stellar musicality.

The liner notes lack acknowledgment of the original artists/composers. Whenever I see this, I feel the need to comment, as the practice is both unprofessional and unethical. Overall, Bringing Yellow Back is a disappointing album. It is always especially disheartening to see a group with a rich history such as the 'jackets take a turn for the worse. This group needs to get a handle on the basic elements of vocal singing before its next effort at recording. Perhaps an apt title for the next release would be "Bringing Intonation Back".