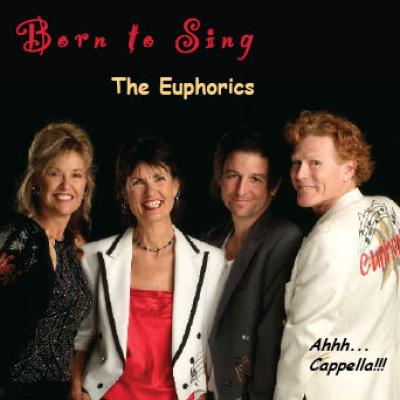 Every once in a while, amidst all of the super processed a cappella that's out there, I stumble across an album that charms me, warts and all. Though perhaps not technically flawless, the Euphorics' aptly named Born to Sing is just this sort of album. It's a wonderful reminder that there is much more to an enjoyable recording than mechanical perfection. Sometimes you gotta just let it all hang out and have a good time. So, who are the Euphorics? The Euphorics are a mixed quartet comprised of singers who have been around the block and come back with the vocal chops to prove it. With a group history of seventeen (!) years, these performers have an ease and authenticity to their sound that could only come from years of experience. Sure, their tuning and blend may not always be pristine, but damn, this group can sing! It's a soulful sound that reminded me very strongly of the Persuasions.

What's more, there is a lot more to this group than just four pretty voices. The Euphorics' arrangements are creative, interesting, often funny, and do more with four singers than most arrangers do with fifteen. Their original tunes (When the Big One Comes, and Mr. Bing Jensen's wonderful tale of woe I Sing Low) are incredibly fun and catchy. The fact that their original music blends so well into an album that includes songs by Billy Joel, Stevie Wonder, Lennon and McCartney, and Bob Marley is a real testament to the songwriting talent of this group.

In some ways, this album is a real gift to the a cappella community. Sometimes we take ourselves too seriously. An album this energetic and charming forces you to turn off your inner perfectionist and just enjoy the music. My congratulations go to the Euphorics for this wonderful album, and for showing us all how to have a good time.

Born to Sing, the latest by Canada-based The Euphorics, doesn't quite feel like an album. This collection of competently rendered tunes feels more like "stockapella", an attempt to blend into the background. If the goal is to score a deal with Ford Motor Co., or maybe a birthday party in leaner times, this is fine work. If the goal is to make me listen twice, less so.

Everything on this album seems remarkably subdued. From the minimalist (and unhelpful) liner notes and poorly lit group shot, to the sparsely produced, tightly-wound final product, the Euphorics take precisely no risks. This is the sort of group that debates the greatness of Bob Dylan while giving Don Fagan a free pass.

It is helpful, then, that the Euphorics sing very well. This is the sort of group you bring in to high school choir practice to show the kids how it's done (here' s betting they'd take that gig, too). Everything is in tune. Everything. The programmers at Melodyne could use the Euphorics as a reference point.

The soloists sing quite nicely here. After the Goldrush, easily the best track on the album, features a lovely, subtle solo. Too frequently, though, the soloists' timbres err on the side of purity, which is completely inappropriate when covering, say, Stevie Wonder. There's a difference between having the notes and nailing the notes.

While the low-key production is the right direction overall, a touch of studio magic might have helped here. Bing Jensen's baritone mines some gravelly depths that could have been benefitted from a bit of smoothing over. With a broader safety net, perhaps he would be free to take some risks, which would add texture to very straightforward (and often curiously inverted) arrangements.

And that's an apt summary of the album as a whole. The individual tracks are impressive for their vocal acumen, but not for evoking a sense of purpose. The Euphorics tackle the driving string lines of Eleanor Rigby with a breathy attack that borders on parody. Just when the track seems ready to build to something special, the group abruptly switches its focus to the latter half of an incongruous medley.

Let's talk about medleys for a moment, shall we? I fail to understand their appeal generally, but if I cede the possibility that they can positively contribute to an album, shouldn't some sense of unification be part and parcel of their appeal? Shouldn't musical themes resonate between each truncated title? On an album comprised of 30% medleys, shouldn't someone in the group take the time to ensure this is the case?

As it stands, the only thing unifying Born to Sing is calculated competence. Block chords and lockstep vibrato take us from The Jungle Book to traditional spirituals. The result is an album that evinces the Euphorics' considerable talents, without actually entertaining us with them.

I recognize the talent, but I cannot recommend the album.

The Euphorics are a four member a cappella group hailing from Canada. Their new album, Born to Sing, is a pleasing display of a cappella music, but somewhat boring at times.

The first thing that I noticed about the album was the group's overall musical ability. It was clear that each of the four members is a fantastic singer. As a group, they are able to sing together perfectly in pitch and perfectly in tempo. Their tuning and blend truly rivaled the best a cappella groups that I've heard. Even after listening to the album 6 or 7 times, I can't pick out a single place where any of the singers hit any sour notes or even sing slightly off the beat.

The tenor sings lead the most, and deserves a special mention: in addition to sounding great, he displayed a remarkable talent for musical mimicry. He sounds like Bob Marley on One Love, like John Lennon on Across the Universe, like the guy from O Brother, Where Art Thou? in Man of Constant Sorrow, and like Stevie Wonder in As (Always). In each of those styles, and a few others, he does an admirable job. However, this is not an entirely good thing — I felt that the group may have suffered in finding their own sound as a result. What do the Euphorics sound like as themselves? I was left wondering a bit.

My major complaint with the album follows that theme: many of the songs did not display much personality. As mentioned above, it was clear that the singers had outstanding voices and musical ability; I just wish they had let those shine through a bit more. The songs on this album were nearly all "unrisky", and the overall effect a bit boring.

Part of the problem was that some of the songs were too slow. This was particularly noticeable in River of Dreams, which seemed to drag quite a bit, even though I quite liked other aspects of the arrangement. For kicks, I dug out my Billy Joel original and compared the tempo to the Euphorics' version. Sure enough, my suspicions were correct: the original went about 89 beats per minute; the Euphorics' version was about 68 beats per minute.

But speed is not the only factor I'm getting at. My personal favorite song was I Sing Low, one of the few songs where personality was allowed to shine through — the bass complains about having to go through life (including auditioning for his high school a cappella choir) with a low voice instead of a high voice like his idols. But he finds inner peace: "Popeye said it best, and I quote the man: ‘I am what I am what I am.'" Even though it was one of the least challenging songs on the album, it was a lot of fun to listen to.

One other miscellaneous observation: in the O Brother, Where Art Thou? song medley, I thought Man of Constant Sorrow was by far the best of the three songs in the medley — it would have earned a 4 or 5 if it were stand-alone. The tenor soloist was truly impressive, and the backup vocals were very fun. Consequently I found it odd when they reprised the Down to the River to Pray melody at the end, and thought it substantially weakened what would have been a great ending.

Even though Born to Sing is at times uninteresting, overall this is a very well-done album featuring a talented musical group.

To order this album, visit the group's website, Primarily A Cappella, or the iTunes Store.