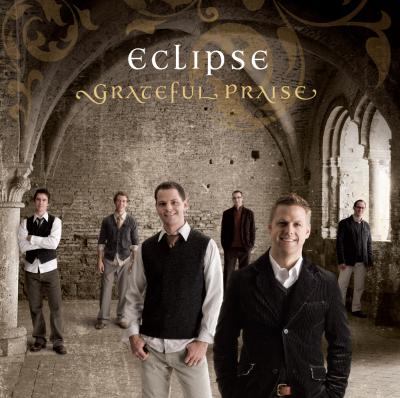 Rich vocals, inventive arrangements, and a real sense of reverence combine to great effect on Eclipse's aptly named latest recording, Grateful Praise. It is an album of carefully crafted music designed to convey a sense of celebration and joy in one's faith. The care and forethought that went into the creation of this album are apparent in everything from the musical strength of each individual track to the polish of the album jacket design. Overall it is a wonderful achievement to which I can offer only the smallest criticism along with my hearty congratulations to the group.

I have to say, I loved the arranging work on this album. There's not a lot of copy/pasting to be found here. Each song is intricate and develops at a good pace, and the voicing of the backgrounds display an unusually detailed knowledge of each singer's talents. This pacing and knowledge together result in some wonderfully musical moments that complement well the message of the texts. This is the sort of artistry that separates the good from the best in a cappella music.

Speaking of text and meaning, I really enjoyed the fact that this album felt first and foremost like a celebration of faith in general, rather than the elevation of a single belief over all others. Listening to this music I felt encouraged to appreciate the power of faith, be it my own or others. It can be very easy for a sacred album to come across as preachy, and I applaud Eclipse for creating a much more inclusive and positive vibe with their music.

The only criticism I would have for this album is that I felt as though the production was a little inappropriate at times. The aesthetic featured is very much modern pop, with a dry mix and super tight editing. That kind of sound can work really well in a lot of contexts, but for a sacred album I felt like it threatened the humanity of the vocals a bit. It's a personal preference, but I actually appreciate a little imperfection with music that speaks to the soul. It makes it that much easier to relate to the person or people conveying the message.

Based on their previous RARB reviews, Eclipse seems to have been well received. Grateful Praise is a new direction for this sextet, as it's an entirely faith-based album of sacred music. Eclipse has an overarching pop sensibility to their group sound, with soloists who are expressive and captivating. Think 98 Degrees meets Rockapella while colliding with standard sacred text and the contemporary Christian style, and you'll have a decent understanding of what Grateful Praise brings to the a cappella table.

The boy band style of solo singing doesn't really do it for me. While it stylistically matches the overall vibe of the group, it feels a bit contrived and forced.

Arrangements are thin, lacking some much needed texture in verses which become tired and monotonous over the course of the album. The sound is meditative and relaxing, while at the same time plodding and uninspiring. Repertoire choice has potential throughout the album, but the arrangements don't allow the songs to fully blossom. Dynamics seem to be constricted to mezzo piano and mezzo forte, never reaching outside the box in which Eclipse seems most comfortable.

Technically, there are trouble spots scattered about with glottal attacks at the beginning of solo phrases, as well as in "ooh" and "ahh" sections of the backing vocals. Just listen to the first note of Go With Me or the "Alleluia" sections of the opening track All Creatures of Our God and King for examples. While prevalent in pop singing, Eclipse should be able to move beyond these glaring moments through the hiring of a vocal coach. This change in their technique will be beneficial to their vocal health and will allow them to perform at a high level for longer periods of time.

Tuning and rhythmic timing are non-issues with Eclipse. The production is natural, warm, and resonant, bringing a realistic version of what the group probably sounds like live, which I appreciate.

To be fair, there are some glorious moments of singing that have been captured in Grateful Praise, but it's not entirely my cup of tea. This album is solid in its musical and spiritual foundations, but not one I can whole-heartedly recommend to the general public. However, if the track list and style speaks to you, it may certainly be an enjoyable listen.

Grateful Praise is an album featuring Christian hymns sung in a contemporary a cappella style. The group Eclipse displays excellent musical talent: most of the arrangements are interesting and just about all the songs are very enjoyable to listen to. Some of the tracks are up-beat, others are more subdued. Overall the musical style reminded me a bit of another Christian a cappella group, Rescue. However, this album is at least as much about the lyrics as it is about the music; it is clearly an expression of their faith and an invitation to others to experience what they have been given.

Although the vast majority of the tracks contain songs that Christians of all denominations will enjoy, the Latter-day Saint (Mormon) influence on Eclipse's song choices is apparent. Five of the 11 hymns are arrangements of Christian hymns found in the current LDS hymnal, and one of the other hymns, Go With Me, unapologetically invites people to listen to the LDS message.

My two favorite tracks on the album are similar in style, slower songs with beautiful messages. The first is Mercy's Arms, and is just gorgeous. It talks about faith in God and what will happen in the hereafter: "Sweet is the taste of love that awaits in mercy's arms...When I reach my journey's end, how I hope that He will call me ‘friend'…". Musically speaking, I thought it was very interesting the way the words "a mighty fortress" appear from time to time in the background without disturbing the peacefulness of this hymn. The second is Evening Prayer — again, I thought it was gorgeous, with a top-notch arrangement. There are sections of "ooh"-ing that would have been easy to mangle, but instead the singers just float their vocals giving the song a free and unforced feel.

Two other songs I thought were very well done had a more up-beat feel. I liked their version of the well-known hymn All Creatures of Our God and King quite a bit. The arrangement was very interesting, with some unexpected polyphonic interludes between the verses. My only real complaint is that second syllable of "Alleluia" tends to have a very strong "ay" sound, with a fairly glaring diphthong. I also liked For the Beauty of the Earth, although at times the word sounds almost like "beaudy". The arrangement is great, though, with a baritone soloist and higher background vocals going on above him most of the way.

The tracks that I felt were the weakest had mainly to do with the arrangements rather than the singing (the singing without exception is outstanding). These included God is Love, which has a boring melody and features chord modulations for no apparent reason, and I Believe in Christ, which alternates somewhat strangely between verses featuring a soloist (which I liked) and verses sung by the group in harmony (which I didn't like).

Another questionable arranging decision occurs with Open Thou Mine Eyes. They use John Rutter's arrangement of the hymn fairly closely, albeit pitched down about a fifth, but for some reason change Rutter's rhythms in a couple of places — for example, singing two sixteenth notes and an eighth note instead of three triplets. The modified rhythms changed the feel of the piece compared to other recordings I've heard, but not to the better in my opinion. On the other hand, if I weren't already familiar with Rutter's arrangement, I would have loved this version; consequently I gave the track a "5".

But back to the aforementioned Go With Me. As mentioned earlier, it invites people to listen to the LDS message of restoration: "Messengers from heaven speak to men on earth… knowledge long forgotten now is given face to face… go with me to Cumorah". Cumorah is the hill where (by his account) Joseph Smith was given the ancient plates from which he translated the Book of Mormon. I thought the musical arrangement complemented the message of the lyrics in an inspiring way, and it was one of my favorite tracks. Disclaimer: I am a believing LDS church member, and that undoubtedly affected my perception of this song.

In summary, Grateful Praise is a great album for anyone looking for gorgeous singing and interesting arrangements of Christian hymns, if you won't be offended by the one track containing a Mormon-specific message.

To order this album, visit the group's website, A-Cappella.com, or Primarily A Cappella.