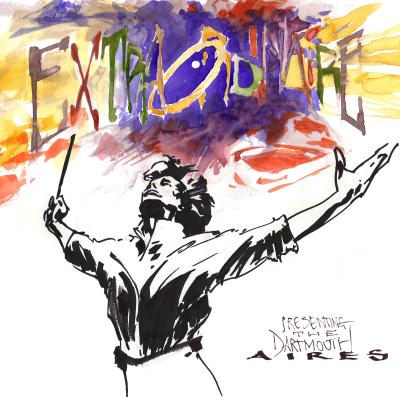 The Dartmouth Aires have a knack for creating a collection of songs that doesn't appear to be for everyone's taste on the surface. But then, the more you listen to the disparate pairings of songs, the more you begin to believe in the artistry and creativity of this group. Extraordinaire is an apt album name and descriptor for the latest recording by this eclectic bunch of performers.

What wasn't so thrilling was receiving another CD that not only included, but also opened with, a recording of Crazy. Definitely tired of that one. And yet, the organic feel of the arrangement and Jarrett Cato's passionate delivery accomplished its goal of winning the listener over and establishing the disc as a very pleasing experience. Crazy is actually indicative of the entire album as each track is delivered by the group and produced by an excellent crew of engineers with a dedication to creating signature Aires sound.

Stronger lacks the power and punch of other versions that I've heard. Also, I was intrigued by alternate lyric usage in the song (much the same as I was with On The Rocks Rozy). "Well, I've been searching for you like Cronkite" replaced "Well, I'll do anything for a blonde dyke." All well and good, as the latter isn't the most appropriate lyrical phrase in these more enlightened times (though a subject matter Kanye seems to like), but if lyrics are going to change ... what follows afterwards needs to make sense. "And she'll do anything for the limelight" references the heretofore replaced "dyke", and doesn't make sense talking about Walter Cronkite.

Two songs really stand out on the recording: Keep it Loose, Keep it Tight and White Wedding are on the list for being the best songs of the year. A lot of albums tend to bury a really weak track in the middle of the recording or else a really upbeat number to indicate a sort of pinnacle if you will. The Aires buck both of these conventions with Keep it Loose, Keep it Tight ... a smoothly seductive cover of the Amos Lee original. Nick Brown's arranging skills laid down a blanket of silk and satin that soloist Derrick Smith playfully leaps and soars over. The combination is breathtakingly simple and beautiful. White Wedding is just the opposite — pulsating with a driving force that is pure pleasure. It was the only track that made me involuntarily hit the repeat button. I love it.

The Dartmouth Aires continue to make music, so make sure to pick up a copy of their latest release. You'll have an Extraordinaire-y good time.

In collegiate a cappella, with such rapid turnover, there is something to be said about consistency. The Dartmouth Aires are nothing if not consistent. It has been a while since the Aires' last release, Impaired, yet Extraordinaire still has all the classic Aires elements: interesting song choices, apt solos, decent arrangements, and lackluster engineering that thwarts the intensity.

The Aires deserve credit for originality in their repertoire, as they do not rehash the handful of songs found on the typical collegiate album. Especially boundary pushing is Kanye West's Stronger, which has some novelty appeal but does not completely click. Knocks Me Off My Feet also falls short, proving a bit too harmonically complex for the group to truly master. Other song choices are interesting and well suited to the Aires' sound. The Aires' arrangements are strong as well, showing a diverse range of syllables and styles to complement the genre of the originals. I especially appreciate the frenetic articulations in the block, adding lots of power to juice up the arrangements. Soloists push the album forward with talented, comfortable performances, especially Cole on the grueling marathon of Separate Ways.

Yet much of the group's gains in performance are muted by the engineering. There is great stuff in the backing vocals, but often they are mixed too far back. Bass is especially lacking, often nearing non-existence. There is a beautiful raw, gritty quality in the Aires that is trying to get out, but the mixing and production often polishes over the voices and leaves a staid feeling.

Extraordinaire provides ample evidence for those a cappella fans who say the producer matters more than the group. About half the tracks are mixed by John Clark, the other half by Ed Boyer (with one Bill Hare thrown in). While the contrasts are not stark, I found myself liking the Boyer tracks — which have a bit more power and energy to them — while I remained unimpressed with the Clark efforts. They are both very talented engineers, and my personal taste surely accounts for my preferences. Yet it is interesting how much the mixing, and not the singing, determined what appealed to me.

Overall, the Aires have the talent and drive to make a compelling and unique album, but uninspired mixing choices make Extraordinaire sound little different from the majority of decent collegiate albums. With a few more risks, the next Aires release has the potential to be stunning.

The cover art for the Dartmouth Aires' latest release is, in a word, grand. The baton-wielding gentleman at front and center reaches up to the heavens as he conducts an orchestra of color. The title, Extraordinaire, hangs in the mist of vibrant shades while the text "presenting the Dartmouth Aires" is scrawled along the lower right in stylized script. It's all very dramatic. With a cover like that you'd expect some pretty extraordinary music, right? Unfortunately, while the Aires have turned in a solid collection of tunes, the music just doesn't have the flair to match the artwork.

In my mind, this album is a great example of what makes a "good" collegiate album in 2008. A mix of radio hits both new and old? Check. Competent production? Check. It's all there, and it's all good, but this album is missing the kind of vision and style that puts groups like the Bubs and OTB on another level.

I've been impressed by the Aires in the past, and I don't think that the culprit here is lack of talent, but rather a failure to make progress from previous works. It sounds like the Aires are sticking to the same formula while groups around them are trying new things. In the spirit of improving things next time around, here's a quick rundown of the good/not so good.

Good: production; it's consistent across the album despite being turned in by 3 different engineers (John Clark, Ed Boyer, and Bill Hare). Also good are a handful of soloists including Adamah "Zebo" Cole, Derrick "Ino" Smith, and Jarret "Pluto" Cato. Cole gets points for tackling Journey with a somewhat un-Journey-like voice and making the song his own. Cato on the other hand gets points for just the opposite. His pipes are strong and match the style well, but he works in too many riffs and high notes that by the end it becomes distracting.

Not so good: arrangements; the production doesn't do much to hide the repetitiveness and lack of creativity in most of the arranging on this album. Prime offenders include Crazy and Stronger, both of which sound copy-pasted despite occasional studio blips seemingly designed to distract. Also unfortunately lacking are most of the rest of the soloists, who sound young and generally don't bring anything new or interesting to the songs they're singing. The biggest offender, though not technically a soloist, is the voice that does the "harder, better, faster, stronger" line in Stronger. With the production placed upon him he sounds more like Kermit the Frog than Daft Punk.

If you're at an Aires concert, I'll bet this group live will impress you. If they do, and you decide to buy this album, you probably won't be disappointed. However, if you're looking for the next big thing in male a cappella, this isn't it. All the same, with a little more creativity and vision, I wouldn't be surprised if the Aires were the ones to raise the bar next time around.