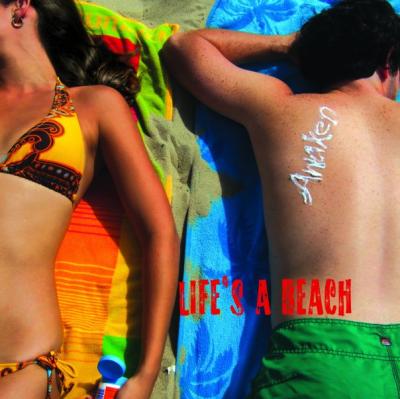 It's been five years since I reviewed Dysfunktional Family Album from UCLA's Awaken A Cappella which featured, among other things, Gravity, a terrific original track from Sara Bareilles. Well, I suppose we all know that the intervening half-decade has been very good to Ms. Bareilles (and may I say, rightfully so) but sadly, this same period has not been as kind to the men and women who now comprise Awaken.

The eclectic repertoire — in this instance, ranging from Chaka Khan, Carole King and Sly & the Family Stone to Missy Higgins and Imogen Heap to Billy Joel, Journey and yes, even Tenacious D — remains intact. Ditto for a predisposition towards pumped-up bass and dominating percussion. What's lacking here, however, in contrast to their 2003 effort, is a certain precision in individual part singing, a solid, "in the pocket" sense of "groove", and studio work that truly enhances the group's existing strengths (rather than just masking its weaknesses or injecting "creativity" after the fact). Couple those shortcomings with the arrangement issues — be they too simplistic or too disjointed — which plagued their last CD, and the result is a noticeable drop-off from the group's prior heights.

Now Gabe Rutman is among the best a cappella recording engineers in the country and he is to be applauded for his efforts to keep Awaken sounding reasonably natural and human. Unfortunately, in so doing, there are a myriad of small articulation and tuning errors that come through all too clearly throughout the album, particularly in moving passages (Movin' Out most dreadfully) and particularly in the altos and baritones/tenor 2's (Scar, Tribute). In addition, I'm left a bit baffled by the approach taken with vocal percussion. The group features a multitude of VPers but almost without exception, they all seem super-sibilant and terribly trebly, with very little differentiation between hi-hat, snare and cymbal and very little in the way of a crisp, thumping, rhythm-establishing kick drum except that which sounds like it was added in post-production. Either way, when the kick drum can be heard, it too often feels like a dead, thudding background noise rather than the forward, groove-creating force it needs to be in tracks like I Feel the Earth Move and Any Way You Want It.

Questionable studio choices and the occasional tuning mistakes aside, though, the group's most fundamental problems continue to be in their arrangements. To be fair, there are numerous tracks here that show a sophistication and complexity that was lacking in their prior work. The trouble is that all the busy-ness and texture in the world is ineffective if, overall, the song does not come together as a cohesive whole. Scar is perhaps the best example — clearly, a lot going on but it remains a collection of disparate parts rather than a unified arrangement (ditto for the first verse of Where Are You Going). Then there are those tracks that impose a somewhat unexpected "feel" on their source material, which is a valid artistic choice but which made them unfulfilling for me — e.g., the too-dancy, not funky enough opening track, the too-plodding Chariot, and the too techno Ain't Nobody. And unfortunately, there are those arrangements that are unimaginative (Walking in Memphis) or downright poor transcriptions of the originals (Movin' Out).

Quite simply, I wanted and expected better from this group based on what I'd heard from the in the past. Life's a Beach isn't at all worse than average, but disappointingly, it ain't all that much better either.

Life's a Beach is Awaken's first album release in about five years. Their two previous releases, Pitch-Slapped (2002) and Dysfunktional Family Album (2003) were simply delightful, so my expectations for this were quite high.

Some collegiate groups manage to maintain their excellence throughout the years, though membership turns over completely in the 4-year cycle of earning a Bachelor's degree. Some collegiate groups have a driving force who whips the group into shape or an unexpectedly talented crop of singers, and then the group falters when those people graduate.

This album may put Awaken into the latter category, though one miss may not equal a trend. Life's a Beach is a sloppy, sloppy album. From the overly sibilant vocal percussion to the lack of precision in performance to the flip-flop of the second and third tracks on the back cover art, Life's a Beach feels like it was put together by folks sitting in the sun too long.

Their ladies don't blend at all and their tuning is iffy throughout. Performances are shaky and just not together — there is no crispness in execution. This is present in every song, but is most obvious in their painful version of Hide and Seek, where flawless timing and togetherness is absolutely required. Dynamics? Nonexistent except where digitally added. These songs needed to be practiced and perfected outside the studio before this group set foot inside the studio. The soloists are good, but are often too far forward in the mix, perhaps to hide the sloppiness of the backgrounds.

As is becoming more evident as more and more groups head to one of the big name recording engineers (in this case, Gabe Rutman), a brilliant engineer does not a brilliant album make.

With years of unrecorded repertoire under their belts, Awaken's song choices were seemingly made without regard for cohesiveness, and some of the songs chosen are overdone or just bad music. Do we need another Walking in Memphis? And Book of Love ranks up there with Muskrat Love in my list of worst songs in the world that I can't believe someone affirmatively chose to arrange and perform a cappella (even if Peter Gabriel decided to cover it). Some choice lyrics: "The book of love is long and boring, no one can lift the damn thing… The book of love has music in it…Some of it is transcendental, some of it is really dumb." This song falls into the "really dumb" category, which is too bad because it happens to be their best performance as far as blend.

One miss isn't enough to write off Awaken as a group past its glory years, but let's hope the next album brings back some of the excellence present in their earlier releases.

We all know that a cappella music, and the production effects that often enhance a cappella music, can sound dated fast. Listen to an a cappella compilation album from a few years ago. Pick out what still entices and what's becoming old news (be it song choices, syllable choices, filters, bass treatment, whatever — for a cappella music, like technology, has eras). Life's a Beach was recorded from 2004-2006. But lucky for us, you'd never know. And you can't pick out what was probably recorded first, and probably recorded last, as the level of musicianship remains high throughout. This is a great testament to the group and to Asylum Studios.

Two areas give Life's a Beach real permanence: the powerhouse soloists, and the focus on group sound. Awaken has excellent singers, really professional singers, who reliably blow your socks off with their talent despite the carefree SoCal beach bum images on their album art. To cite individual soloists is unnecessary, as all impress. Instead, I'll put forth a request: hearing a full-length solo from Cynthia Wennstrom would have been most welcome.

And mixed with the group's professionalism is great fun. Their cover of Any Way You Want It is sung so hard, so "take that, Journey!", that it's difficult not to listen to it repeatedly. The hilarious Tenacious D (Jack Black/Kyle Gass) tune Tribute provides a colorful segue for the album. Career Day is a playful original compliments of a few Awaken folks. Poppy Scar is hard to get out of your head, and even lump-in-your-throat Book of Love is fun, as through its great beauty there is such honesty and commitment. Stephin Merritt's lyrics about music support a well-known philosophy: some music is transcendental, and some of it's just really dumb.

What Awaken does well, Awaken does really well. Is it transcendental? You'll have to listen for yourself to decide.

Given all the beaming goodness on this album, the missteps are unfortunate, but thankfully, pretty minor. The group's arrangers are a bit addicted to mixing in different songs into their covers, something common and nearly expected now in a cappella, but rarely done to this level. The mix-ins actually become distracting. The half-time tempo of Chariot just doesn't work, and aches to be kicked back up to a mid-tempo rock piece. And the track order boo-boo on the back of the jewel case and as displayed on digital players is too bad when this is an otherwise polished final product (although 'Kyle Gass' is incorrectly cited in the liner notes as 'Kyle Glass', too).

Overall, Life's a Beach is a nice one for your collection. Good music, excellent singing, strong work.