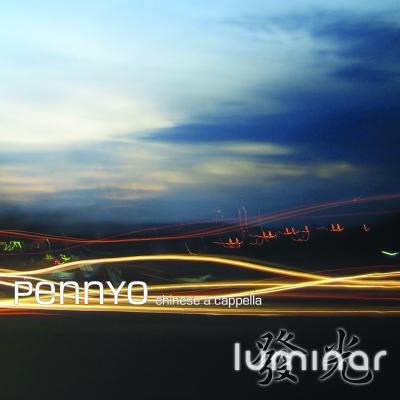 PennYo has stepped up their game with Luminar, an engaging album of pleasant Chinese pop tunes. True to genre, the songs kind of run in one ear and out the other without leaving too much of an impression. That said, PennYo picked a pretty good mix and sang through it pretty well, leading to a pretty good album.

Xiao Sa Zou Yi Hui is tons of fun, far and away the best song on the album. It's catchy, it's got an inherently interesting melody, and a nice solo from Huan Wang. Plus it's got a vocal erhu solo about two-thirds of the way through, which is pretty darn cool. If I were picking a collegiate compilation, I'd pick this song and I'd be happy about it.

The other songs have a little less going for them, even before PennYo comes into play. Some are faster, like the album's opener and closer, and some are slower, like a lot of the ones in the middle. A couple have some medley bits grafted in, occasionally in English. Some songs, like Ai Hui Wen have a Celine Dion vibe about them, and one — Hao Ren — I could swear is an American song that's been translated into Chinese. It reminds me very strongly of a country ballad I hear on the radio a lot, and something else I can't put my finger on - particularly the chorus. PennYo's website seemed to be down when I looked, so I couldn't check the author credits, but anyway it's pretty darn familiar.

PennYo did a great job picking soloists and setting them up in the set list. The leads alternate between male and female leads, between breathy tenor or soprano and huskier middle timbre voices. For a non-Chinese speaker like me, the vocal textures were usually the most distinguishing parts of any song. As for the backgrounds, they are generally tuned well, with what sounds like a reasonable amount of studio assistance, and the blend was generally good.

It's nice to hear so many unfamiliar songs, with nary a Fix You or Since You've Been Gone in sight. I wish Chinese pop music had a little more going for it, so PennYo would have a little more to work with. But they did a good job with what they got, and Luminar is a pretty good album.

If you want to know what PennYo's most recent release — Luminar — sounds like, read my review of their previous release, Emergence. The review of Emergence sums up exactly what Luminar is all about. Unfortunately for PennYo, this second strike firmly cements the group's status in a niche genre without crossover appeal.

I'll be the first to tell you that I find a lot of modern pop music particularly uninteresting, but I will frequently find some redeeming quality like punchy lyrics or a decent hook. PennYo sings Chinese pop that, to me, sounds a lot like American pop. Unfortunately, I can't catch any punchy lyrics, as the disc is exclusively in Chinese. Nor can I hear any decent groovy hooks, as the arrangements remain uniformly boring and uninteresting. I would estimate something like 65% of the backing vocals are "oohs", "doos", or "dums." The album's best track, Xiao Sa Zou Yi Hui, also happens to be the most interesting, with a fresh sound despite banal syllable choices.

The album's musicality is what you expect from a collegiate group these days: in-tune and well blended but heavily processed and lifeless. Several times the block borders on out-of-tune, which I blame on lack of experience and confidence in the studio, but overall Luminar sounds cohesive. Soloists again are hit and miss. A few give some real energy, while others sound unsure and petulant (and heavily processed). Yet even all the studio magic in the world can't make the bland repertoire and arrangements come alive.

PennYo probably has great fun singing, but there's really no reason for anyone who doesn't care about these songs or this group to give a listen.

"Chinese a cappella" is the promise on the cover of Luminar, the latest album by PennYo, an all-Chinese a cappella group from the University of Pennsylvania. And Chinese a cappella it is, although it might not be what you're expecting. A quick glance at the song list verifies the refreshing absence of Maroon 5, The Fray, and Panic! at the Disco, but what you get instead are the parallels of these bands from the Chinese Top 40 (if such a thing exists). The tracks contain the same types of arrangements and vowel sounds that you hear in American a cappella covers, and the material itself is as melodramatic — if not more — than most of the tunes traveling through American airwaves. It's pretty much standard collegiate a cappella, but sung in Chinese. Oh, and instead of vocal guitar solos, there are a couple of kick-ass vocal erhu solos.

The first few tracks are very exciting to listen to, partially because you're thinking, "Wow! This is a cappella, but in Chinese!" Particularly noteworthy is the opener, Tao Wang, which features engaging material, solid solo work, and an effective arrangement with lots of fun layers and meter changes. In general, the music is sung well and in tune, there's plenty of energy to go around, and there really are some refreshing creative elements to some of the tracks. Again, the addition of the a cappella erhu (a traditional Chinese violin-like instrument) is a brilliant artistic decision and is particularly well-executed in Xiao Sa Zou Yi Hui. The group also has a knack for innovatively layering American pop hits over matching chord progressions (Snow Patrol's Chasing Cars in Tao Wang and Savage Garden's Truly Madly Deeply in the album closer Jian Dan Ai).

The problem is that this Eastern language novelty starts to wear off around the same time the material starts to become musically one-dimensional, and the result is a sharp drop-off in the ability of the pieces to hold the listener's attention. Most of the songs themselves, either by fault of the original artists or of PennYo's interpretations, just aren't engaging enough, even with a solid energy level and the translations handily provided by the group. The average-sounding soloists do very little to bring new life to these tracks, and at times I found myself mostly disinterested in what was being sung. Generally, the up-tempo pieces are the ones you'll be coming back to.

In the end, Luminar ends up slightly above average, mostly because of PennYo's solid musicality, effective production, and some creative risks that paid off (I'd be all over a PennYo cover of The Beatles' The Inner Light). The group shows plenty of promise, but the album falls short because of uninspired and disengaging material. To be fair, the whole Chinese lyrics thing might make it hard for English-speaking listeners to develop a deep connection with the songs, but truly exceptional music can and will transcend linguistic barriers and resonate within any audience.