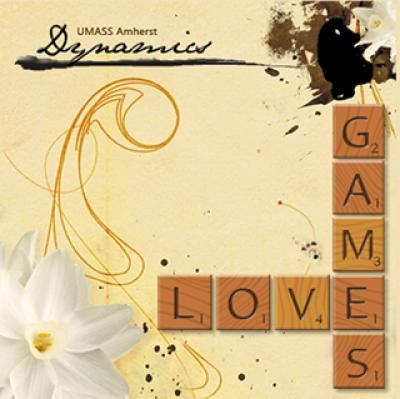 I last heard the University of MassachusettsDynamics on their debut album Crescendo. They have definitely taken it up a notch with Love Games, but have yet to achieve greatness. The musicality is better. The soloists are better. When listening to Crescendo multiple times, I skipped forward to two tracks; with Love Games I only skipped two tracks.

The caliber of arrangements is higher than what has been coming through the collegiate pipeline in general, but that is not due to any talent in the group. Instead, they turned to RARB reviewer Randi Stanley and NYC A Cappella for 7 of the 11 tracks. They should not be faulted for this; if group members don't have the chops (or time) to dedicate to writing solid arrangements, better to use an outsider than to put out an album full of thin arrangements.

The production on Love Games is also a little slicker. The use of the octavizer on the bass lines is not subtle, and the backgrounds sound like they have been touched up and airbrushed. On the one hand, it gives the album a cohesive sound, but on the other hand, I feel a little like I'm listening to the same song over and over again.

I take that back. You Get What You Give stands out, but not in a good way. The spoken word parts of the solo sound so forced they make listening to the song difficult. There is also a long held out "live" that really sounds like it is the wrong note, or maybe it is the right note but the pitch is a bit off. Additionally, I request that the Dynamics reserve the likes of Backstreet Boys to performances and leave them off albums!

I did enjoy Kristin's take on Sara Bareilles's Love Song, and my appreciation for Faisal's voice on Crescendo was validated with his performance on Runaway.

The newest recording by The Dynamics from the University of Massachusetts can be described in one word: pretty. It's not the highest of praise and that's a shame, because the album's central concept is anything but. The emotional roller coaster (and I'm waiting for a great cover of this song!) that encompasses the love games we play in our relationships is a great through-line to attach a diverse repertoire of songs. And I'm sure we all know that the "games" are not usually pretty ones. Actually, the cynic in me says that about only 2% are. To make the concept work, the performers and performances should match the gamut of experiences. Most of the output on Love Games doesn't.

From a technical standpoint, the album suffers a little from being too pretty. Fortunately, this caveat does mean that Love Games is still pretty. You can enjoy listening to the tracks because they have overall pleasing appeal. The quality of the background singing is just as excellent here as it was on their debut disc Crescendo. There is an abundance of warmth and tenderness to the production, with each track seemingly sheathed in a velvet comforter. The album has a lot of lush sounding passages, especially on the third of my three favorite tracks Because. Even with the abundance of auto-tuning, the album sounds pretty natural. You hear all of the voices and, being of the "pretty" sort, the treatment serves the album well.

Unfortunately, there seems to have been a regression in maturity and artistic expression. Most of the soloists lack a sense of bravado that would have counterbalanced the more simple arranging style on the album and naturalness of the production. Missing is a dirtiness or grittiness — a sense of anxiety or angst behind the artistic output. Everything comes across as overly innocent and virginal. The exceptions would be Kristin Santangelo on Love Song and Joe Dean and Dana Bisordi on Your Ex-Lover is Dead, where that same innocence explodes the playful rebuff of the Sara Bareilles cover, and highlights the emo-tragi-comedy of the Stars' duet. The opening track I Want You Back has a fatal flaw: it's not a pop dance song, even though we've come to think of it as a cheesy, crowd-pleasing number. In fact, it's a pretty desperate ode to narcissism and co-dependency. Having a party atmosphere with clapping and cheers totally goes against that grain thematically. Here it's delivered amiably.

Arrangement-wise, Randi Stanley's seven tracks have a better sense of movement than any of the group member-penned numbers, but at least group members are beginning to test the arranging waters. There is an abundance of block chords and staid tempos held throughout many of the songs. And on occasion, the mix makes every part seem just as important as the next. And I'll paraphrase an a cappella aficianado who was listening to the album with me who added: "Isn't it ironic that a group that has dynamics in their name doesn't utilize them in their singing?" Touché, my friend, touché. The group could have taken some of the solid foundations in the arrangements and made them soar.

Love Games isn't going to win over any legion of new fans for the Dynamics, but if you are needing a bit of pretty in your life, it's worth a listen.

To quote the refrain of Love Games' penultimate track, You Get What You Give. This sentiment is not only tried and true, but also tragically applicable to this album. The Dynamics have put together a body of work with questionable enthusiasm, and as a result, the songs have to rely mostly on aggressive autotuning and a few noteworthy soloists in order to boost the final product into the "average" territory.

You'll notice right away that the tracks were treated with ... er, generous post-production (either that or the Dynamics have a robot in their bass section). Pitch correction is applied liberally, and while this of course ensures that every chord shines with a full array of overtones, sometimes it also noticeably strips the voices of their natural timbre. But hey, that's almost become standard fare these days; collegiate groups make a ton of money from concert sales, and with little overhead to worry about, they might as well pump it into making a flashy CD with every studio effect they can fit into 40 minutes of music. That being the case, said studio effects have become the norm, and so (*gasp*) substance must prevail in order for an a cappella record to stand out of the crowd.

And there's your problem. Love Games has all the production elements that you've come to expect, but there's nothing for them to play off of. Virtually every track is decidedly low in energy, so the sampled percussion and heavy compression only add to the issues, when they're actually meant to enhance the sound. The production isn't appropriate for the material. Long Train Running, for example: it's missing a certain edginess because of a muffled bass line, a laid back VP sample, and disinterested singing. I understand that some songs are slow to begin with, like Love Song and Apologize, but these could still have benefited from some dynamics (irony, anyone?).

Beyond these issues, I'm having some trouble understanding the identity of the Dynamics. Most of the tracks are covers of melodramatic ballads of some sort, and then — wait, what? Everybody by the Backstreet Boys? I still don't know if this was meant to be a joke song or not, but either way, it was successful in making me bury my face in my hands.

Now, when the Dynamics are able to showcase some emotion, they really do rise above average. The Beatles' song Because is particularly beautiful, and it's here that you realize that this group is actually solidly musical, with considerably nice tone and blend. Some soloists also break through the monotony with inspired renditions, most notably in Runaway and You Get What You Give. It's too bad that their natural sound couldn't shine through more often. Perhaps if more effort were given on the recording end, the production would compliment the singing more effectively. There are hints that this group has some great musicality, and I look forward to hearing if they can convey it more appropriately on their next release.